It is very likely that Wahlfelt might not have celebrated his birthday. The featured image above is one of the few paintings of a Victorian era family birthday celebration. Celebrating birthdays became more common among well-off families at this time, but it was still more common to celebrate one’s namesday. 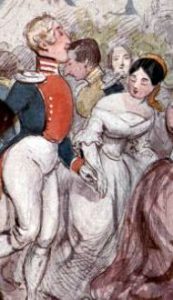 Anyway, remember Lieutenant Wahlfelt? He proposed to Augusta in the spring of 1849 and she rejected him. The truth is, she didn’t seem to think highly of him:

12 March 1851 (Augusta and her mother were visiting the Ribbing family)
“Mother and I was visiting Ribbingens today where, marvelously, Baron Fredrik happened to keep company and was as decent and agreeable as he can be when he wants to. We departed early, for I had a premonition that Lieutenant Wahlfelt could get the idea to transport his insipid personality to Clara {where Ribbingens lived}, which definitely would not have been pleasant.”

“Lieutenant Wahlfelt was, thank God, resentful of me all evening so I was spared from hearing his stupid reasoning.”

Because Fredrik Wahlfelt (sometimes referred to as Paul or Pålle Wahlfelt) didn’t marry or have children, there is nobody to keep his memory alive. So to celebrate the 200 year anniversary of his birth, here are a few biographical notes.

A little more about Fredrik Wahlfelt 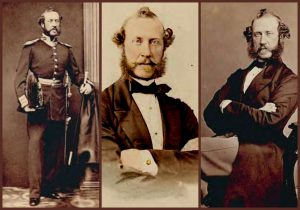 Paul Axel Fredrik Wahlfelt was the second of 3 children born to lieutenant colonel Svante Fredrik Wahlfelt and Kristina Ulrika Tham. When Augusta met him, he was a lieutenant in Andra Lifgardet. He became captain in 1851 and major in 1862. From 1839, he was a teacher at the Gymnastic Central Insitute (GC) in Stockholm and later also at the military academies, Karlberg and Marieberg, where he taught gymnastics and weaponry. In 1851, he achieved the rank of senior teacher at GC, a title he kept until his death in the spa-city of Wiesbaden, 16 July 1873 (age 56).

Wahlfelt contributed to both theoretical and practical aspects of teaching gymnastics and weaponry. He also developed a bayonet fencing rifle.

Bayonet Fencing Rifle was a rifle modified for bayonet fencing.

One cadet at Karlberg described Wahlfelt in his memoir* : 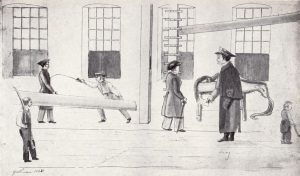 P.H. Ling teaching in the gymnastics and fencing hall at the Gymnastic Central Institute. Drawing by Egron Lundgren 1839.

“In gymnastics and fencing, we had as a teacher the renowned fencing master Major Pålle Wahlfelt. He, as well as the majority of physical education teachers at that time, were not clear about the meaning of Ling’s admirable educational system and, therefore, taught gymnastics at Karlberg according to a system that was not a system at all. But he had a great ability to fire up us boys with his electrifying command and his energetic shouts.” 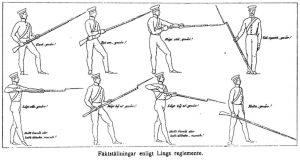 “Seeing Major Wahlfelt fencing against two opponents was a delight. None of us has hardly reached a similar skill with said weapon.”

The fatal fencing accident of his nephew
Of the 3 siblings Wahlfelt, only Fredrik’s older brother Carl Svante Vilhem (1815-1886) married and had children. His oldest son, Nikolai Axel Fredrik Wilhelm, was born in 1861. At that time, the family lived in Finland. Axel obtained an MS degree and taught mathematics. He married Agata Magdalena Lönnblad. In 1893, he was living in Stockholm in order to work on his PhD in mathematics at the university. 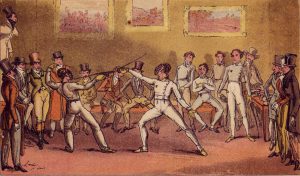 Axel was also a good fencer, just like his father and uncle Fredrik had been. On 20 February 1893, he had just finished a fencing lection with his instructor Drakenberg when he and a friend, Lieutenant Fid, continued with some free fencing. They were both wearing face masks as required. Somehow, the tip of Lieutenant Fid’s foil penetrated Axel’s mask between the nose and the left eye and Axel fell to the floor. The eyewitness account stated that there was no bleeding, but because he was lifeless, Lieutenant Drakenberg realized the urgency and called for a doctor. Axel died soon after arriving at the hospital, 32 years old.

Family descendants in the USA
At the time of the tragic accident, Axel’s wife Agata was pregnant with their first child. The child, Bror Axel Svante Wahlfelt, was born on 18 June 1893 in Helsinki, Finland.

What became of him? Ancestry.com has the clues.

Thirty-one years later, he is listed as a sailor on the Swedish vessel “Anten” arriving from Shanghai, China to Port Townsend, WA on 25 June 1924. He had joined the crew in Newcastle and is listed as deserted after arrival in the US. On 31 March 1931, Svante then marries Hilja Leskinen in Manhattan, NY. In 1942, he registers for the World War II draft, giving his address as 2301 Wyoming Ave, Washington, DC (in Kalorama, DC, and next to what is now the Embassy of Yemen).

Svante died in 1963. His wife Hilja and her sister Maria Wikberg both lived in Saline, MI until they passed away. Svante and Hilja’s daughter Ruth Ebba Märta was born in 1933, married a Christophersen, and had 3 sons, which are listed as living in Denmark. Her sister Maria, who of course is not genetically related to the Wahlfelts, had a daughter, Ethel Posldofer, who in turn had 2 sons and several grandchildren. Descendants who probably have no idea of their grand family history.