Oh my. What a fun and memorable cruise we participated in last week! It was above all expectations!

It started with the taxi ride to Old Town, Stockholm.

-We would like a big taxi, said Kerstin to the taxi operator, it is not that we have a lot of suitcases, we just have wide skirts.

I don’t know what the taxi driver was expecting, but the next morning, up pulled a 7-passenger van with seats facing each other, almost like a Victorian carriage. It was perfect. 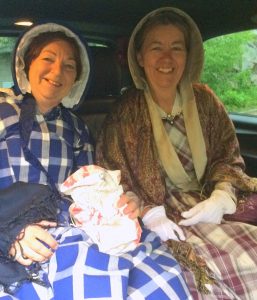 Traffic was slow-moving during the morning rush-hour into Stockholm, but that gave us the opportunity to practice our white-gloved waves and give the Stockholm commuters something to muse about.

Getting closer to the Royal Palace in Old Town, we could see Juno, the beautiful little canal boat that was going to be our home for the next 4 days. The moment had finally arrived – we were going to trace the trip Augusta made on Göta Canal in 1850.

The taxi pulled up at the quay and the driver helped us line up our carpet bags and hat boxes in front of Juno. Relatives and well-wishers were arriving and surprised us – so nice of all to take the time to come into Stockholm at this early hour to wave goodbye. Early morning tourists walking along the quay below the Royal Palace also stopped by and wanted us to appear with them in their photos of Stockholm.

Soon it was time to embark. The smart-looking crew took care of our unusual baggage and helped us over the gangway.

Our cabin was on the top deck. The first, and what became our daily challenge, was to climb up the steep and narrow companionway with our voluminous dresses and layers of petticoats. We soon learned that you had to gather the skirt with the left hand and hold on to the rail with the other hand.  Augusta must have done the same. 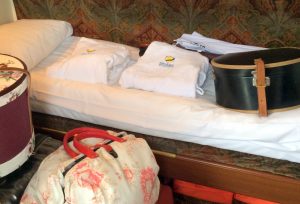 Our luggage had been delivered to our charming little cabin which had varnished mahogany trimming, beautiful wallpaper, a little commode, and two charming bunk beds. If you want to get a real cultural experience, this is it! What we are sure Augusta did not get, was a wonderful surprise: a small bottle of champagne and fresh strawberries! 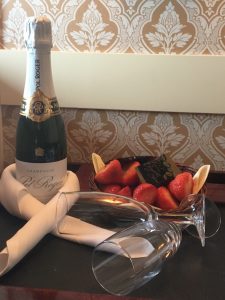 But this was not the time to unpack or admire our antique cabin. The crew had been busy for our departure and three short, loud signals announced that the engine was going astern – we were departing!

Time to get our handkerchiefs out and wave goodbye, just like Augusta had described:

“After I had, with my handkerchief, waved a last goodbye to my friends left on the shore, my focus was soon on our beautiful capital city, which from the Baltic offers the view of a grand painting. “

Well the difference was of course that in addition to just viewing our beautiful capital city, here we were – both in 1840s dresses – photographing and filming the “grand painting” with iPhones and large Nikon cameras with long lenses. 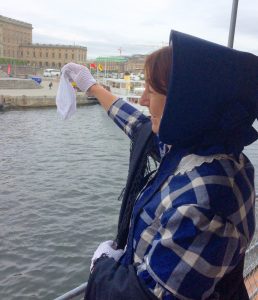 Soon after departure, we entered our first lock – the Hammarby Lock – and then entered Lake Mälaren. As the clouds were hanging low and it started drizzling, this was a good time for the 34 passengers to meet in the dining room and get introduced to the 11 crew members on the boat.

By then end of the 4-day cruise, we all felt like one big family.

One response to “Göta Canal: Day 1 – the Departure”