Although you’ve had me wait for a letter for such an unbelievably long time, I have still written to you right away because there is nothing as pleasurable as getting a letter from one’s friends. I do not know what kind of fun those people have who do not correspond with anyone. It is at least my greatest pleasure, although sometimes it is also my greatest dread – for example, writing New Year’s letters and thank-you notes. But writing to a friend is of course always my dearest avocation.

Thank you for the greetings from Lieutenant Brandt, it is always nice to hear about people who remember us. I also remember him very well. I think I have heard that he got married. Maybe it is someone else with the same name?

Let’s see if what I am about to tell you is news to you: that Jaquette Rütterskjöld is engaged to Lieutenant Theodor Wijkander. You may already have heard that,  because rumors travel far. I have not known it until last Sunday. Do you remember at school, Jaquette was always so afraid that she would remain unmarried, but she nevertheless believed it and always said that “La paicible fille” would be her comfort in old age. They will marry next spring and then move to Wermland, something Mrs. Dimander will work against with both hands and feet. But it will most likely happen anyway.”

Wasn’t it Mrs. Dimander who also arranged a sleigh ride that Lotten wrote about in her previous letter? Who was she? I assume she would have been of mature age (30-50?), wealthy, independent, social, and not having kids of her own to take care of.

As part of understanding social life in Stockholm during the mid-1800s, I am concurrently reading three diaries (listed in references below). Would Mrs. Dimander be mentioned in any of them?

The first entry, on 28 March 1843, describes a gathering that the Forsell family is planning in their home. It is going to be a huge, exquisite, superfluous, and costly party and they are going to invite 80 people. There is going to be dancing and they have hired Mr. W for the evening (that must have been important, whoever he was 🙂 ). Unfortunately, they decide that the invitations should not go out until 4 days before the party. At that time, they find out that Mrs. Dimander has already invited most of the same people to her party, planned for the same day – a party for 100 people! Marie-Louise writes: “I, who never envied those who visited the funny old lady Tant Netta’s balls – who would ever believe that she would now, thereby, get us into this predicament. 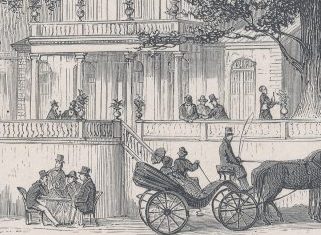 But it gets more interesting. On 10 September 1847 (one year after Lotten’s letter about Mrs. Dimander), Marie-Louise and some of her family members are out to pay a visit to some friend in Stockholm. On their way, they recognize Tant Netta’s carriage and riding in it is also Adelaide Rütterskjöld.

Would that be a relative of Jaquette Rütterskjöld who Lotten wrote about?

Now Marie-Louise and her family get invited to visit the Dimanders at Djurgården the same evening. It turns out to be a small dinner party consisting of the families Nyman, Wijkander (would that be Jaquette’s fiance?), Eld, Göthe, Wirrman, Liljewalchs, Strömberg, and Rütterskjöld, in addition to the famous portrait artist, Maria Röhl. The men play cards and the women converse. Mrs. Dimander surprises them with a dinner consisting of crayfish omelet, milk, calf brisket, apples, and pastries. Marie-Louise is very happy with the evening and with Tant Netta; she only regrets that she forgot to say goodbye to the nice old Mr. Dimander.

Googling combinations of names at the party reveal the identity of Mrs. Dimander. And the census records of Stockholm confirms the family relationships.

Petter Dimander Frisson (1746-1789) was a tobacco manufacturer and Member of Parliament. His wife was Mrs. Maria Dimander (born Nordström) – the Mrs. Dimander who was famous for her comical French. They had 5 children: 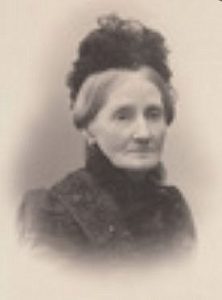 So what about Augusta’s and Lotten’s school friend, Jaquette Rütterskjöld? The girl who got engaged and would leave Stockholm when she got married. It turns out that Mrs. Dimander was Jaquette’s maternal aunt. That is why Mrs. Dimander didn’t want her to leave Stockholm!

Mrs. Dimander had a sister, Ulrica Sophia Nyman, who married a Rütterskjöld. According to census records, she and her 5 children were taken care of by the Dimanders – living in a house owned by Mr. Dimander. Their children were:

I am sure I will run into Mrs. Dimander in more letters from Lotten to Augusta. One question remains though, which school did Jacquette attend – Mrs. Edgren’s or Mademoiselle Frigell’s school?

3 responses to “Who was Mrs. Dimander?”