In the summer of 1845, Augusta turned 18. She had just finished her schooling in Stockholm and maybe her mother Anna thought it was time for her to meet a suitable young man. Why not at the most fashionable seaside resort on the Swedish west coast, Gustafsberg?

Well, did Augusta meet someone at Gustafsberg? Yes, she did fall in love but with someone not to her mother’s liking. At least, that is what comes across in the correspondence between Augusta and her best friend Lotten Westman. Who was he? Augusta and Lotten never mention him by name.

A couple of weeks ago, I found an 1845 newspaper announcement listing the guests who had arrived at Gustafsberg’s Spa at the same time as Augusta. I have been searching for some of those guests – maybe finding Augusta’s first love. Last week’s blog entry was about the family Salomon who arrived with two daughters and a son. Unfortunately, the son turned out to be only 14 years old.

This week, I decided to look up a Secretary T. Röslein from Stockholm.

This time, I started my search for T. Röslein in the contemporary diary of Marie-Louise Forsell. And of course, Marie-Lousie knew him. His full name was Titus Vincentius. What a name!

Marie-Louise first mentioned meeting him and his sister Pellan at a dance hosted by Chamberlain Carl Henning Lützow d’Unker on 4 November 1845. Then, a month later, she invited the d’Unkers and four gentlemen to her home to celebrate Mrs. d’Unker’s birthday. But in addition to the guests, “the rather nice Titus Röslein came by himself.”

So now I knew that he was a rather nice guy and had a sister, Pellan. It was time to search the archives.

What I found in the archives

Titus was the only son of krigsrådet (royal military counsel) Carl Henric Röslein (4 March 1774 – 27 October 1840) and his wife Maria Charlotta Ericsson (8 Nov 1788 – 28 April 1877). Carl Henric was wealthy and had spent more than 20 years in England, Germany, and France in business and trade before, in 1814, he was hired by the Swedish crown prince, Carl Johan Bernadotte, in the prince’s private office.

The Röslein family lived close to the royal palace in Stockholm but spent the summers 1820-1829 at the bucolic Djurgården, at a house named Ludvigsro. In 1852, Ludvigsro was bought by Wilhelm Davidson, who renamed it Hasselbacken and opened a restaurant there. Kerstin has previously written about Davidson.

The siblings with the coolest names

But Titus was not the only child. There were 3 children born to Carl Henric and Maria Charlotta. And they were all given fantastic names:

Sadly, all children died early in life. Titus and Pellan both died at age 31 from tuberculosis while the cause of death was not specified in the church record for Leontina – only that she was 11 months old. They all belonged to Klara parish.

There are no digitized portraits of the children and the only thing we know of Titus was that he was nice and that he was a secretary at the central bank (Rikets Ständers Bank). Oh, and he was inducted into the Order of the Innocence in January of 1847. Augusta had already been a member since 1844. Being a member allowed one to attend the most prestigious balls in Stockholm. So at least, by the age of 23, Titus became a member. 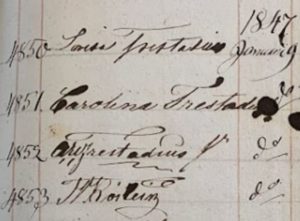 Titus Rösling’s signature on the ledger for the new members of the Order of the Innocence in January 1847 (last row).

Could Titus have been Augusta’s first love?

Possible Cons (in the eyes of Augusta’s family): Who knows? Maybe Titus’ father had been too controversial which could have affected the family name? A lot was written about him after his death in 1840, and there is a rather interesting biography of him in the national archives (in Swedish).

Despite all the controversies about Titus’ father, there is a rather sweet entry about him in another contemporary diary. Augusta’s acquaintance, Lotten Ulrich – whose father was the king’s private secretary and therefore also worked with Titus’ father – wrote the following in her diary in March of 1831:

“Alb. Åmansson said that when she visited us a couple of years ago, I was dressed to fence, that is, in a riding coat and green bombazine pants, holding the foil and in the en garde position, because I was going to have a fencing lesson, which I had every day with krigsrådet Röslein. Oh, how fun these lessons were! He always made me laugh out loud, even though the positions and the lunge etc. were so grueling that I could hardly move after the lessons.”

I have searched for paintings or illustration of girls fencing in the 1820s but found little and then only from the late 1800s. Those pictures show women fencing in skirts. Maybe Lotten Ulrich was just lucky that Carl Henric Röslein was interested in teaching her fencing. How common was that in the 1820s?

And then, how did they decide on the appropriate attire for a girl? What did a “riding coat” look like?

A riding coat, or a bonjour, was simply a short jacket suitable for riding (see picture below). 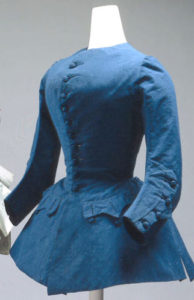 They were probably knee-breeches, like those men wore when fencing, but made of bombazine fabric.

And since I didn’t find any pictures, I made an illustration of how I think Lotten Ulrich might have looked during her lesson. 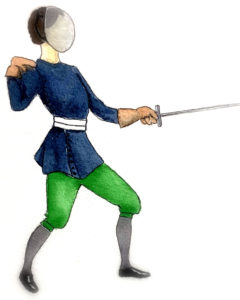