Lovisa (or Louise) Edgren (born Dethmar) was a beloved teacher. Unfortunately, there is not a single portrait of her. When the family Edgren’s private school for girls closed in 1844, the students kept in touch with each other and with their former teacher through letters, reminiscing about this wonderful time in their lives.

“Lucky Augusta who gets letters from Mrs. Edgren! Greet her a thousand times from me. Tell her that I still worship her as warmly as when I said goodbye to her for the last time, and when I start talking about them, it is always an inexhaustible topic and at those times, I forget both time and place and it takes me back to the happy times when I was educated by them; when a smile and a friendly word by Mrs. Edgren sent me to the seventh heaven. Tell her all this, and say that if in the future, whether I get ever so happy or unhappy, I will never forget them. Oh, when I just think of them, I get overly joyous.”

Lovisa Dethmar was born in 1802 at Reckenburg, an estate close to Anholt in southwestern Germany close to the Dutch border. Her father, Friedrich Wilhelm Dethmar, born in 1773, was the pastor in Anholt and a writer. Lovisa had at least two sisters, Eugenia, born in 1806, and Adelheid Clementine Therese, born in 1809. One sister moved to England.

When Lovisa was young, she was sent to Dresden to study. She was already a great artist and good at playing the harp. During her studies, she got interested in the works of the Swedish poet Atterbom and decided to visit Sweden. It is fascinating that a pastor’s daughter, in the early 1800s, was sent away to study so far from home. Dresden was famous for its architecture and art treasures and maybe she was sent to Dresden to study art? Or did she study literature? The fact that she traveled to Sweden because of an interest in poetry shows signs of independence and determination. Maybe it was these personality traits that made her such an engaging and loved teacher. 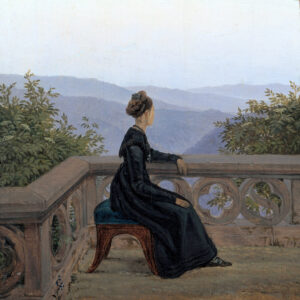 This is how I image Lovisa Dethmar in Dresden. Kerstin and I saw the painting there during our Augusta journey through Europe. The painting “Woman on the Balcony was painted in 1824 by Carl Gustav Carus (1789-1869)

It was in Sweden she met her future husband, Johan Fredrik Edgren. He was an educated man and also a pastor. They were married in Anholt in 1838 and then settled in Stockholm. Lovisa’s sister, Eugenia, decided to join them and the same year, the family opened their private school for girls in Stockholm.

The school closed in June of 1844 when Pastor Edgren was appointed pastor at Morup’s parish on the Swedish west coast. As the girls in the school bade farewell to each other and the Edgren family, Cecilia got many cards for her memory album. But from some correspondence between Augusta and Lotten Westman, we believe that Cecilia actually stayed with the Edgren family in Morup after the school closed in Stockholm. 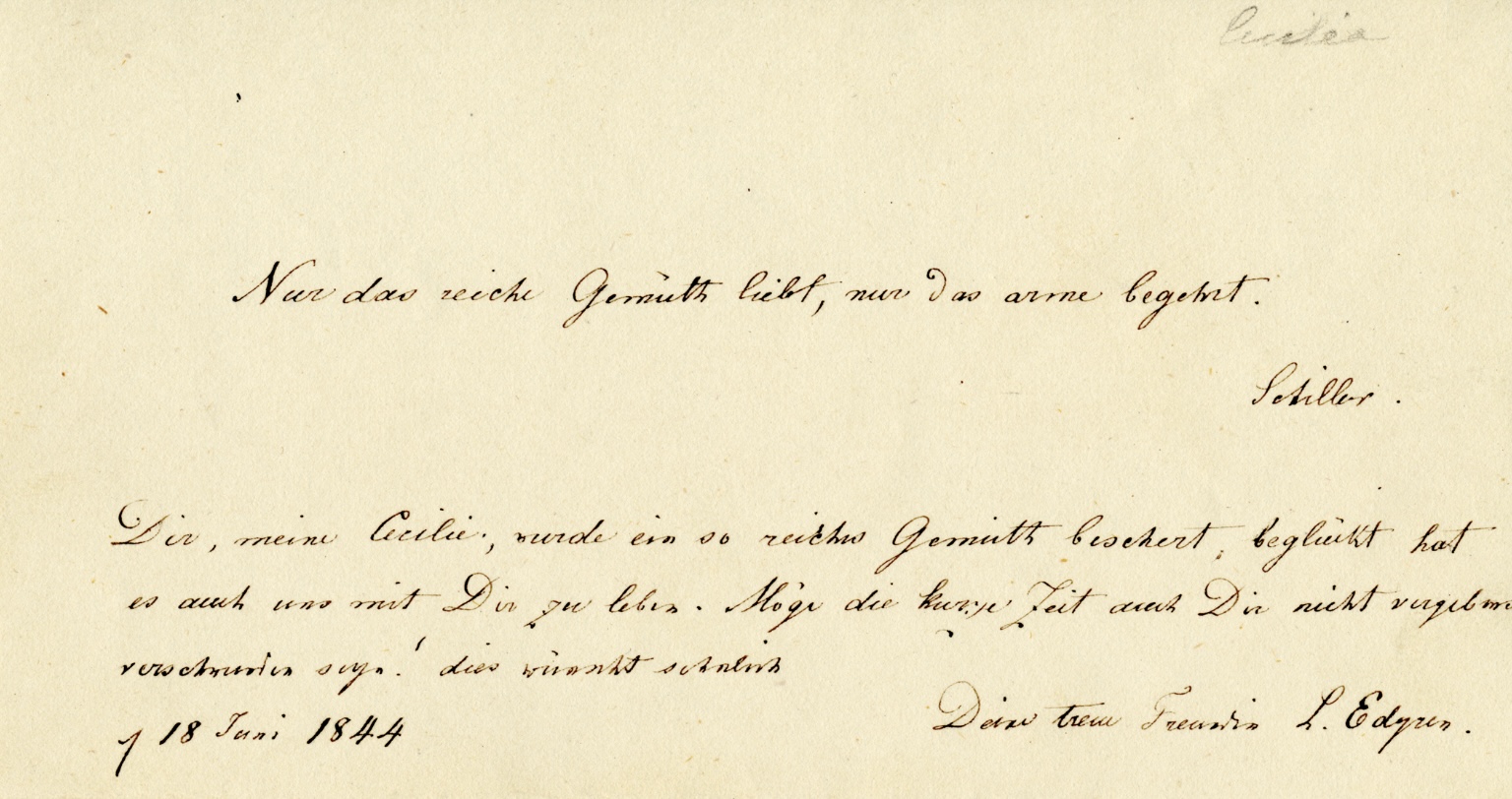 Lovisa Edgren wrote her greeting to Cecilia in her native German. The owner of Cecilia’s Memory Album kindly provided me with a translation of the German text to Swedish. The English translation is my own.

(The quote is from Friedrich Schiller’s Liebe und Begierde:

In English: “You, my Cecilia, were given such a rich mind, we too have been delighted to have you with us. Hopefully, the short time was not wasted in vain even for You. This wishes longingly,

In English:
“A merciful destiny shepherds you through the turbulent life;
Nature gave you a pure heart,
Oh! give it back so pure!

May the world treat you as kindly as you treat it,
may it do to you what you do to it,
then you can only be happy.

This is the wish of your friend, E. Dethmar”