One of Cecilia Koch’s friends gave her a card with a cryptic message. Charlotte Lindström had drawn a picture of a blue flower – a Forget-Me-Not – and included the text: pas une véritable amie (not a true friend). It doesn’t make sense to me. Or did she copy the phrase and mistook par for pas? The phrase, par une véritable amie (by a true friend), would make a lot more sense.

We will never know. But if you have any ideas, please let me know. 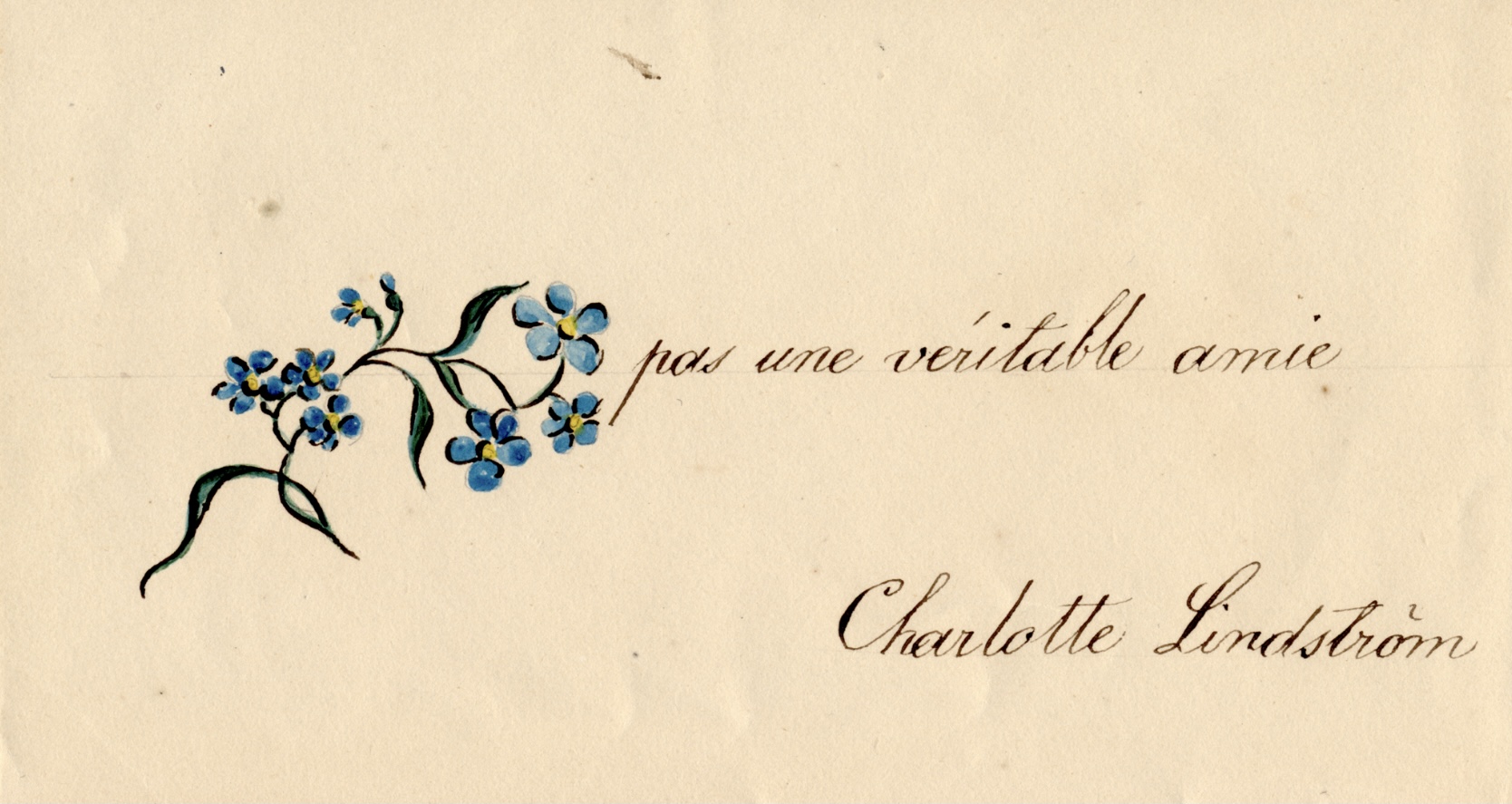 And we will never know for certain who Charlotte Lindström was. But I have a very good candidate. Lindström is a fairly common name in Sweden and Charlotte (Charlotta) was a very popular name in the mid-1800s. However, social class was also important at the time. Someone who gave Cecilia a card for her memory album would have belonged to the same class – the ones who paid for their daughters to attend private schools.

I scanned church records in Stockholm for candidates and found one that met my criteria. When I realized that she and her family lived in the house next to the family Edgren, whose school Augusta and Cecilia attended, I was pretty certain this was the right girl. And if I am mistaken, this blog will simply be one about an interesting family in Stockholm.

Charlotta Lindström was born in Uppsala on February 5, 1831. When Charlotta was a baby, they moved to Stockholm where her two younger sisters were born: Sophia Jacobina (June 7, 1832) and Hedvig Ottilia (August 5, 1833). Sophia later changed her middle name, Jacobina, to Jacquette. Their father, Jacob Niklas Lindström was a young professor of medicine and physician at the royal court (Swedish: kunglig livmedicus). Their mother was a countess, Magdalena Eleonora Charlotte Wrangel.

It was a young successful family. The godparents listed at the girls’ baptisms all belonged to the aristocracy, which bode well for the girls’ futures.

The Cholera Epidemic of 1834

But being a medical doctor in the 1800s had its risks. And when the cholera epidemic hit Stockholm in 1834, nobody knew what caused cholera and doctors had limited means of treating patients.

The parents of two other friends of Augusta and Cecilia also died from cholera that fall, Therese Gustafva Aspegrén and Hilda Theophila Lagerheim

The girls grew up not having known their father. They moved several times within Stockholm and in 1844, they were neighbors with the Edgren family, in a block named Svalan. It is possible that they also attended Edgren’s school. And if they didn’t, they certainly knew the girls who were boarding with the Edgren family, like Augusta.

For a well-connected family, life still went on with balls and visits. Anna-Lisa Geijer, the wife of Erik Gustaf Geijer (professor and chancellor of Uppsala University), mentions Charlotta’s mother in a letter to Malla Silfverstolpe (writer and literary salon hostess). In a letter dated February 1, 1847, she complained about a boring ball she had attended. She was, however, delighted to have run into Charlotte Wrangel (Charlotta’s mother) who, “as always, was well and tastefully dressed”. On her head, Charlotte wore a creation of “black lace and purple flowers that suited her a lot.”

Then tragedy struck again. Charlotta’s mother died from cancer in 1856, at the age of 53. The three girls, who were now 25, 23, and 22 years old, were put under guardianship by the court. The two male guardians were unrelated to the girls: Royal Cabinet Chamberlain Johan Gabriel Eketrä (b. 1808) and Chamberlain Carl Gustaf Leijonhielm (b.1820). They would manage the girls’ finances and their inheritance.

Of course, the girls could not live by themselves. Someone would have to take them in. Alternatively, a well-educated girl from a respectable family could always take a position as a governess in a family or become a lady’s companion.

According to church records in 1856, the 3 girls moved in with an elderly widower and nobleman, Major Carl Jonas Lagerberg, on his estate Hamrum in Korsberga parish far from Stockholm. How did they know him? Sadly, their time there was short. Major Lagerberg died the following spring and the girls had to move again.

I follow the girls’ moves in and out of parishes across Sweden. In 1857, Sophia moves in with the family Hamilton at Boo castle close to Örebro. And Hedvig moves to Karlskrona. Charlotta seems to end up in Linköping.

Only Hedvig marries – a navy officer (later, Admiral) named Jacob Lagercrantz. They move back to Stockholm and raise 5 children. Charlotta lives with them at the turn of the century. I wish I knew how her life turned out. She died from a stroke on June 26, 1812, in Linköping.

And by the way, Charlotta and my great-grandmother, Anna Hermanna Lindström (b. 1849) were cousins. Their fathers were half-brothers. 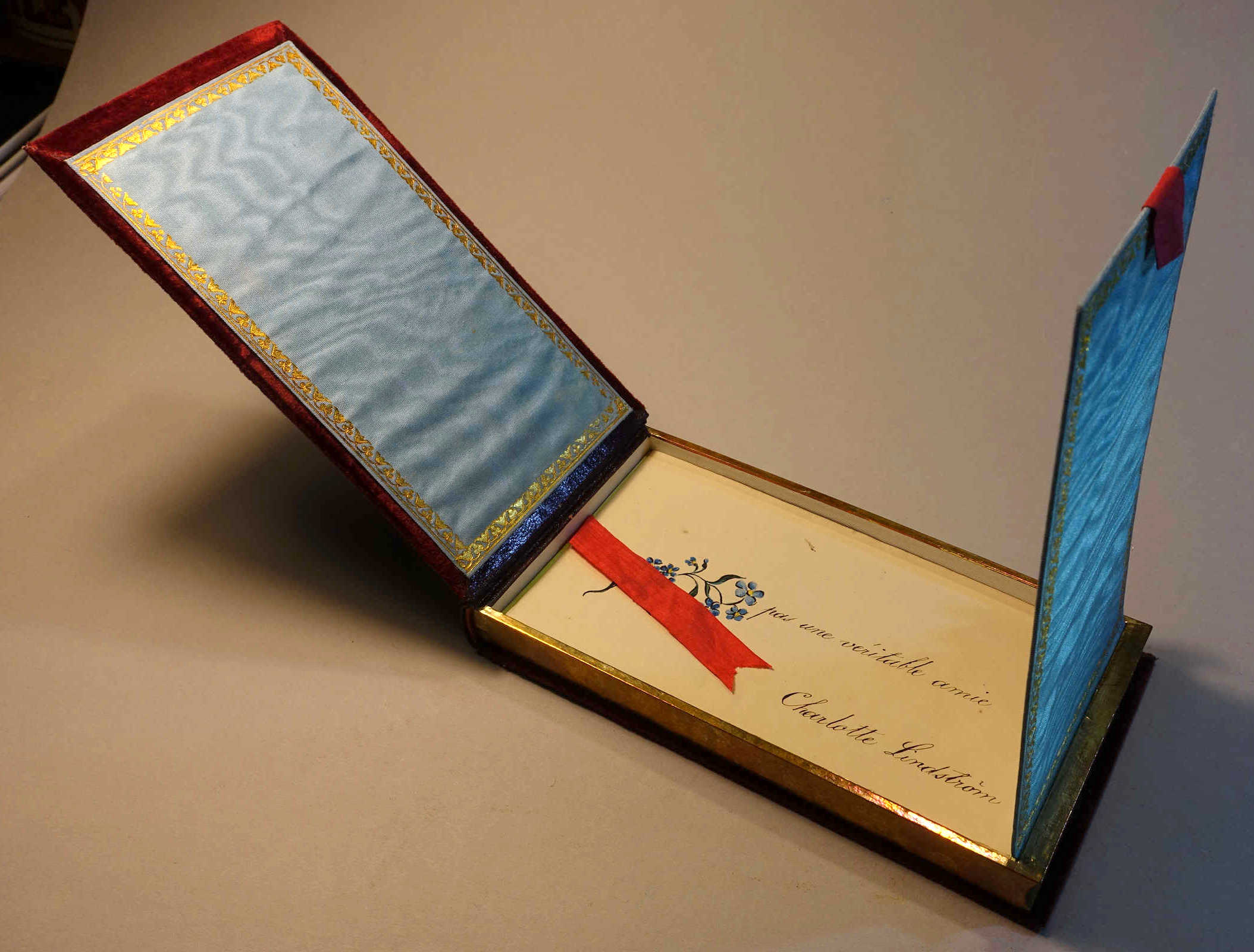