Augusta Rütterskjöld was 16 years old when she sat down to copy the following lines on a card for Cecilia Koch’s memory album.

The poem is actually the last stanza of a longer poem, “Même Sujet” by Desmahis, a famous French poet who lived in the 1700s. It might have been included in a French poetry book that the girls studied in school.

Augusta Rütterskjöld was one of Cecilia’s (and our Augusta Söderholm’s) friends. They had been in the same confirmation class and they had just celebrated their first communion (Jacob Parish, May 1844). They all, most likely, also attended Edgren’s school. Augusta was 16 years old and lived in a large house at Regeringsgatan 66. She had lived in the house since she was born. Augusta was the youngest of the Rütterskjöld children. Her older siblings were Lovisa 21, Adelaide 19, Jaquette 18, and Ewert 17.

Her family was well connected in Stockholm but her father had left them after mismanaging his wife’s inheritance. It was Augusta’s mother and her relatives who cared for the children. The family history is documented in an earlier blog entry about Augusta (Augusta Mariana Rütterskjöld and her Absent Father).

I was wondering if any of Augusta’s sisters might also have given Cecilia a memory card. Were there any cards that had been signed simply by a first name or initials that might match any of her sisters’ names? There was one. It was a memory card by a friend who had also copied a short French poem and who had signed it using her initials, J…e. It was probably signed by Augusta’s sister Jaquette.

Awhile ago, I also wrote a blog entry about Jaquette and her aunt, Netta Dimander: Who was Mrs. Dimander?

The poem from which Augusta copied the last lines can be found in the following book, published in 1835: The French Reader’s Guide; or, Miscellaneous Selections in Prose and Verse from the Best French Authors of the two last Centuries, and from the Most Distinguished Writers of the Present Day.  It is available online. 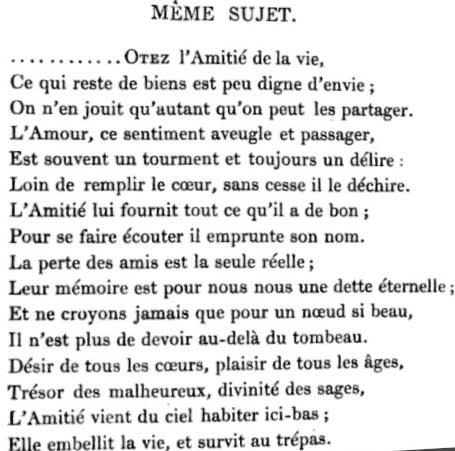