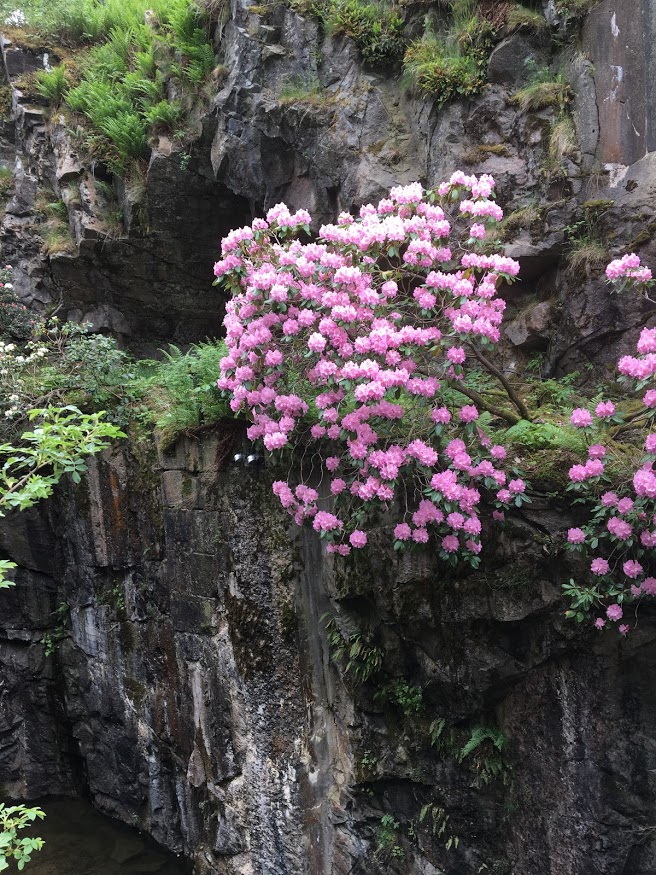 The locks of 1800 in Trollhättan

On the last day of our 4-day cruise, the sun rose around 4 am while we were crossing Lake Vänern. At that time we were fast asleep in our cabin. Augusta had quite a different experience as described in her diary:

“As there was no cabin available except for that of the mate, which only had space for one person, I had to spend my night on deck. As it was a divinely beautiful evening, I complied with a rather good countenance.

The fate also benefited me this time; I was to get company on deck. The clock was barely 11 when a bump that shook the whole vessel proclaimed that we had run aground in the middle of Vänern. All passengers who had already been in their cabins and hammocks for a while now became visible, one after another, dressed up in the most bizarre toilets. The ladies were complaining loudly and Mr. Cassel and I, who in addition to the captain had been the only ones on deck, were now surrounded by a host of groggy and scared people who, unabashed in their curious costumes, formed the most ridiculous groups.

After six hours of being stationary, we began to go forward.”

By the 4th day of our cruise, we were already accustomed to bumps when Juno hit some sand at the bottom of the canal. But the night we spent on Lake Vänern was peaceful and I am sure our cabins were a lot more luxurious than those on Augusta’s steamboat.

“At noon, we arrived at Trollhättan. The weather was beautiful but the heat was suffocating.  My company seemed absorbed by the deepest admiration of our Lord’s sovereignty as they took in the magnificent nature scene which meets the traveler’s eyes. I alone stood mute and numb (I sadly admit) in front of the imposing Toppö falls, which elicited countless exclamations of admiration from the other visitors. I had heard so much praise about Trollhättan that I, as usual, imagined something that in no way corresponded with reality. I saw nothing but an, indeed, quite respectable mass of water burst under my feet. 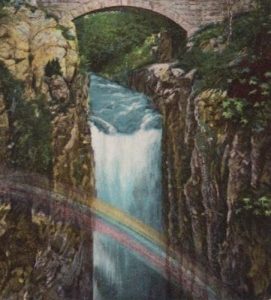 Painting of a waterfall in Trollhättan

I had imagined something I had once or twice read in travel descriptions: a fall, cascading from somewhere high above my head, in which I could see the sun’s rays refract into all the colors of the rainbow. In other words, I had imagined something that did not exist and, as a matter of fact, was highly unreasonable. I might as well have stood on the iron bridge in Norrköping, taking in the same view, although in miniature.” 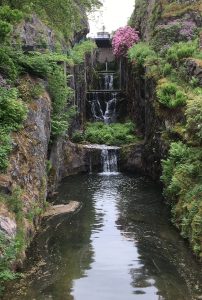 Remnants of the Trollhättan locks built in 1800 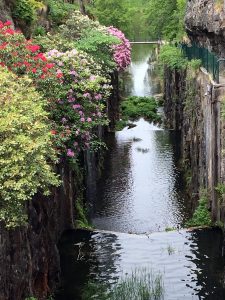 The Trollhättan locks seen from above

Having read Augusta’s descriptions, I was curious about what we would see.  The waterfall that didn’t impress Augusta is only “turned on” during Trollhättan’s yearly water festival. But what impressed us were the old locks from 1800 that are now converted into a park. They resembled a gorge, with small waterfalls and rhododendron bushes clinging to the cliff sides. The system of locks that Augusta used, and which was built in 1844, was also included in the park – lined with walkways and meadows.

Juno had to use the newest set of locks – state of the art system and designed for commercial traffic. The locks were very deep and the walls looked like canvases of modern art created by scraped-off paint from the hulls of boats passing through the locks. At the bottom of one of the locks, and confined within the tall stone walls, our captain treated us to a soulful trumpet solo of a Swedish folk song – very moving!

Close-up images of the walls inside the new locks

“At night we arrived in the beautiful, stately Gothenburg.”

That is all that Augusta wrote about Gothenburg. To approach the city by boat was to us a great experience as Gothenburg has the largest and busiest port in Sweden. By 4 pm, we had reached our final destination.

What a memorable journey this had been! We wholeheartedly agreed with Augusta that the journey on Göta Canal is “…one of the most beautiful and pleasant trips one can make. 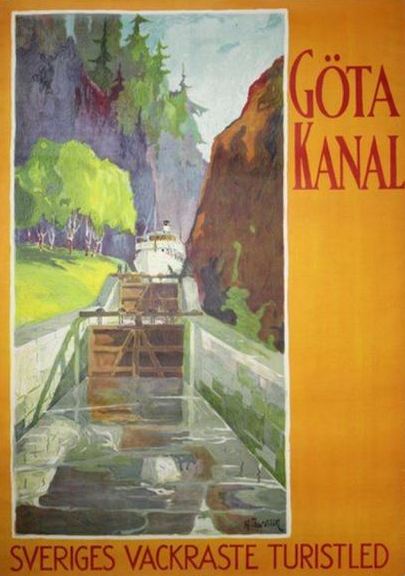