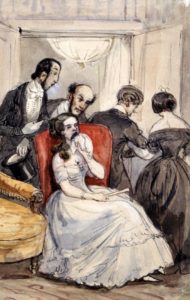 Fritz von Dardel’s painting of a reception in 1848.

Augusta’s friend Lotten didn’t cry over spilled milk. She just laughed as she spilled milk over her white dress. It turned out to be the most enjoyable evening.

Thank you, my dear friend, for your long-awaited letter…

Do you know the most enjoyable day I have had this winter? It was last Monday at my aunt’s. She had a reception and August Blanche and Jolin were invited. Do you know, Jolin is the funniest person you can imagine. He performed several scenes for us and we all laughed from the bottom of our hearts.

Blanche is also the nicest person imaginable. He stood by the buffet table and talked to me so beautifully about youth and the joy in life that I didn’t realize that I was turning my glass with milk upside down and that the milk was running down my white dress!

Soon my other aunt will also have a reception and she will invite them as well. So I will have another fun day.” (Lotten’s letter to Augusta, Stockholm, 9 February 1847) 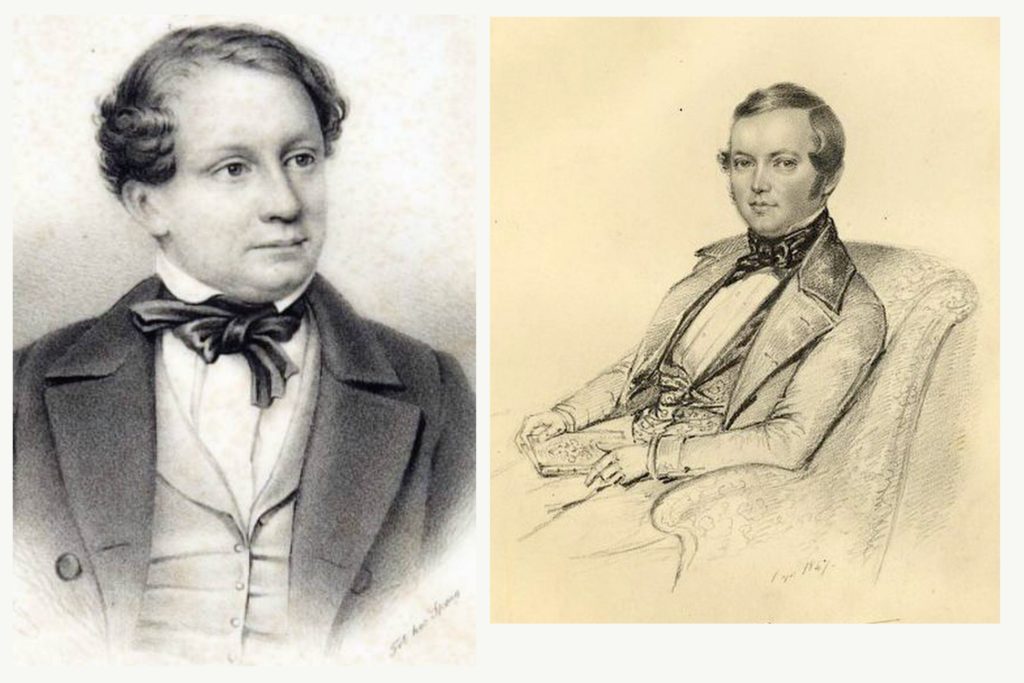 August Blanche and Johan Jolin were popular guests at literary salons and receptions like the ones Lotten’s aunts were having. Both were affiliated with the theatre.

Johan Christoffer Jolin was 9 years older than Lotten. He had studied in Uppsala and was a poet. In 1846 he joined the Royal Theatre in Stockholm and became a very popular actor. He also wrote many of the plays he acted in.

August Blanche was a little older, born in 1811. In 1847, when Lotten met him, he was a prolific play writer, journalist, and editor.

A duel that didn’t happen

I was so surprised that Lotten thought that August Blanche was the “nicest person imaginable”. That was not the impression I had of him.

August Blanche was very critical of another contemporary writer, Carl Jonas Love Almqvist. Almqvist had written a novel, Det går an (It is Acceptable), a book that was ahead of its time as it highlighted the injustice to women regarding marriage, financial opportunities, and independence. The conclusion was that it should be acceptable for a man and a woman to live together without being married and for a woman to run her own business enterprise.

Shocking! At least that was the view of August Blanche who wrote a follow-up story based on Almquist’s book. Almqvist then retaliated by highlighting the fact that August Blanche’s parents were not married. Indeed, August Blance’s father was a famous pastor who had made his maid pregnant.

All this happened years before Lotten met August Blanche, but I assume Lotten had heard these stories as well. Maybe that is why she wanted to paint him in a positive light in her letter to Augusta. And very likely, Lotten might have sided with August Blanche as Almqvist’s views were very controversial.

I don’t know if Lotten met Blanche and Julin again. And I don’t know exactly which aunts she was describing. Most likely, it was her father’s sisters, Anna Carolina Örbom, born Westman (1801-1865) and Emelie Aurora Westman (1812-1863).