“I spent the winter and summer of 1848 at home in deepest solitude, sometime interrupted by a visit from and to Krusenhof.

In January 1849 I traveled, accompanied by Hanna Schubert, to Stockholm where we stayed with baroness Ribbing. Naturally, we had a good deal of amusement: balls, theater performances, and concerts followed in pleasurable succession. Lessons in singing for Mr. Dannström and dutiful visits in return for the previous evenings’ pleasures occupied our mornings.

Erik Sparre came often and paid us visits and Lieutenant Wahlfelt did not come less often. In the spring he proposed to me, but I have always been told that my heart is petrified, and truth is, I believe that it is made of harder material than those of people in general. Anyway, the amiable Lieutenant’s proposal was rejected and in July I returned happy and free to my peaceful, quiet home.”

Krusenhof was the neighboring estate about 3 miles from Augusta’s home at Loddby. 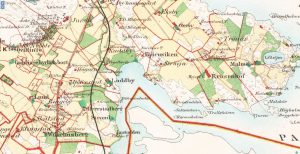 Her best friends, the family Hjort, lived there until December 1850 when they moved to Kungsholmen, Stockholm. More about the  family will come in later posts.

Hanna Schubert (b. 1829) was Augusta’s cousin’s daughter. She married Erik Sparre (mentioned above) in 1851. 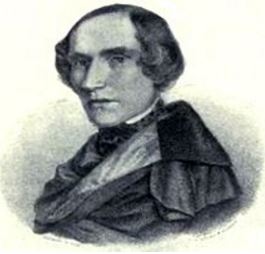 He was very famous in the 1840’s along with Jenny Lind. His portrait (right) was drawn by Joseph W. Wallander.

And who was Wahlfelt, the suitor? Paul Axel Fredrik Wahlfelt (b. 1817) was in 1849 a 32-year-old lieutenant who was an instructor in gymnastics and weaponry. He must have started his military education at an early age as the artist Maria Röhl included him in a drawing (left) of young cadets in 1832 . 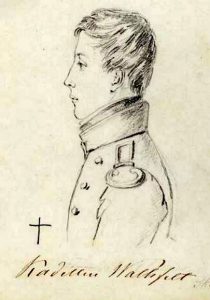 In 1844, he was also included in Fritz von Dardel’s painting of the Burgesses’ Coronation Ball (top of page). This was a ball held in honor of the coronation of King Oscar I and Queen Josephine. The painting probably depicts the newly introduced dance – the polka. What is also interesting is that von Dardel tagged the dancers, as we do in today’s Facebook pictures. Therefore, we know that Paul Wahlfelt was the 5th gentleman from the left or the 4th gentleman from the right. It seems like that would be the tall, blond officer in the middle.

And as a footnote, Paul Wahlfelt never married.