In July 1850, Augusta made a memorable voyage on the Göta Canal. The reasons for Augusta’s voyage was to wave goodbye to her brother August, who was to sail from Gothenburg to Cape Town on the brig Mimer.

And of course, Augusta provides a colorful eyewitness account of her voyage.

On the outbound trip to Gothenburg, onboard the steamer Götheborg, she spends a lot of time with a Mr Cassel (possibly Knut Cassel):

“A couple of loud and gesticulating Frenchmen were entertaining a young, blond, unremarkable man in straw hat.”

“The next day, I became acquainted with all passengers and were then told that the young man in the straw hat was named Cassel and was from the Capital. Furthermore, I came to realize that he was not so unagreeable as I had first thought.”

“The conversable Mr Cassel, who to me appeared to be a big nobody, although with a sharp mind and an incomparable talent to constantly keep his mouth moving, kept me entertained during the voyage.”

On the return trip, onboard the steamer Thomas Tellford, it is the captain who gets most of Augusta’s attention:

“Our captain’s name was Krüger, a very polite and charming young man who fulfilled all the duties of a host on his steamer. He entertained me quite agreeable during the trip, which is also one of the most beautiful and pleasant trips one can make. Before we parted in Söderköping, we agreed to dance the first waltz together at the Innocence Ball in January; let us see if that happens or not.”

But no, Augusta did not waltz with Captain Krüger in January. She didn’t travel to Stockholm until March of  that year.

And who was the charming young Captain who got Augusta to describe the Göta Canal voyage as one of the most beautiful and pleasant trip one can make? 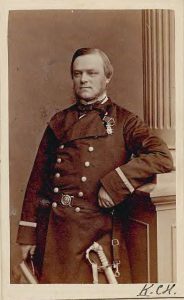 Carl Henrik Kreuger was born 1822. He passed the marine officer examination in 1838 (only 16 years old) and sailed with foreign merchant fleets and the British fleet before becoming a lieutenant in 1846. As a young marine officer, he worked on Swedish ships during the summers: postal ships on the Baltic Sea and canal steamers on the Göta Canal. And that is how Augusta met him in the summer of 1850. He later had a stellar military career and retired in 1885 as a rear admiral.

What Augusta most likely did not find out was that Carl Henrik’s father had an interesting life story as well. Johan Henrik Kreuger was an admiral, author, and inventor. In 1822, the same year that Carl Henrik was born, Johan Henrik was asked by the Swedish government to restore Sweden’s relations with Morocco. Sweden owed Morocco 20,000 piasters for protection against pirates along the Moroccan coast. To resolve the conflict with Sultan Mulay Suleiman, Johan Henrik sailed with a squadron to Morocco. His negotiations with the Sultan were very successful; he returned to Sweden with a personal letter from the Sultan stating that the debt was forgiven. 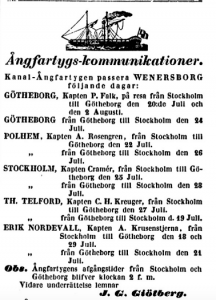