– Do you remember when we tried on Augusta’s dresses in the attic of Aunt Agneta? Kerstin asked me.

No … I didn’t remember that. I remember staying in the 18-century washhouse by the lake shore in which our aunt had lived during our childhood summers.

– Sure you were there too! It was probably in 1977. There was an old trunk there with two dresses. They were both beautiful ball gowns. One was made of pink silk taffeta and the other one was a purple velvet dress. And they were so small – there were bones sewn into the bodice and I couldn’t even fit into it because the waist was so small – and I was just a teenager!

I wish I remembered, but I didn’t. So, were they Augusta’s gowns and where were they now? A few phone calls to cousins shed some light on the dresses. The ones Kerstin had tried on were probably gone. But there was still a suitcase with dresses that our aunt had kept, and our cousin invited us to come and see them.

Nestled in tissue paper were lace blouses, silk shoes, finely knitted stockings, lace cuffs, parasols, and dresses! The first dress we uncovered was a bright purple, silk taffeta dress. It had a form-fitted bodice and a separate skirt. Kerstin and I examined it as if we were some dress detectives. Could it be Augusta’s? 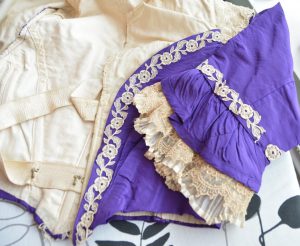 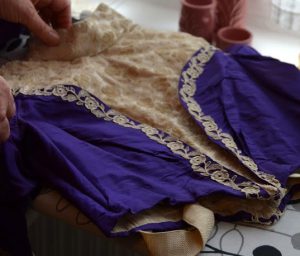 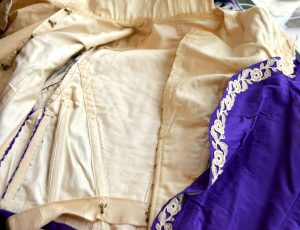 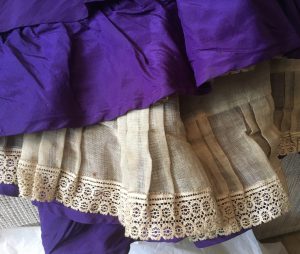 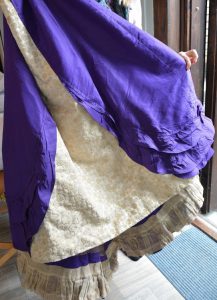 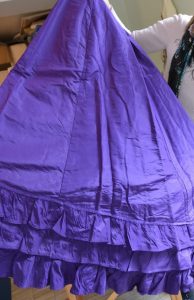 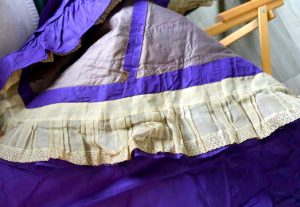 Inside hem and lace 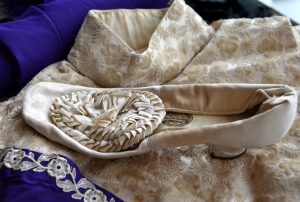 First we looked at the skirt and realized right away that the model was later than those in the 1850s and probably even Edwardian. The bodice, with a high neck, also pointed to a later date.

And then we realized that some seems were machine stitched.

Could it have been Augusta’s daughter, Gerda’s? Gerda was born in 1854 and if it had been hers, she would probably have worn in around 1874. We all agreed that it was not likely Gerda’s as she was not very tall, and this dress was made for a tall person. The silk shoes in the trunk were also a European size 40 (US 9.5).

If it was not Gerda’s could it have been her daughter, Eva’s? Eva, our grandmother, was born in 1884 and if it would have been hers, she might have worn it around 1904.

The dress had a train in the back which would have brushed the floor. This was typical of the first decade of the 1900s. The high neck was also popular at this time.

And looking at fashion plates from 1907-1908, there are some very similar styles. 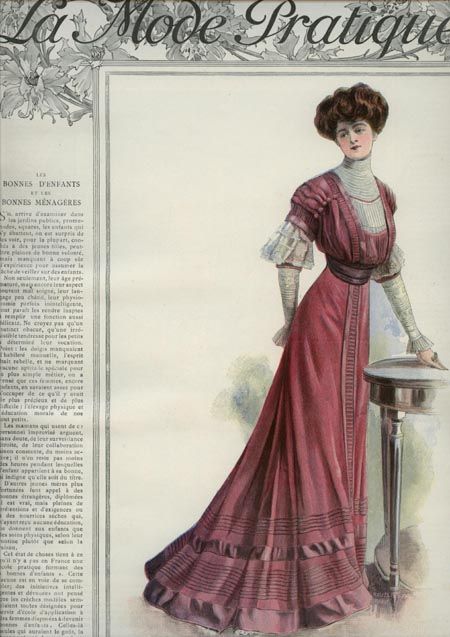 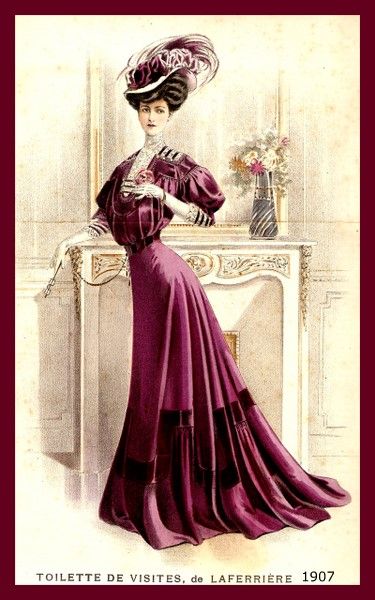 Admitting that we are only amateurs at fashion history, we do believe that the clothes in the trunk belonged to our grandmother and not our great-great grandmother, but that is also really cool!

And who knows, maybe someone in the family has a photograph of Eva in this dress!!!