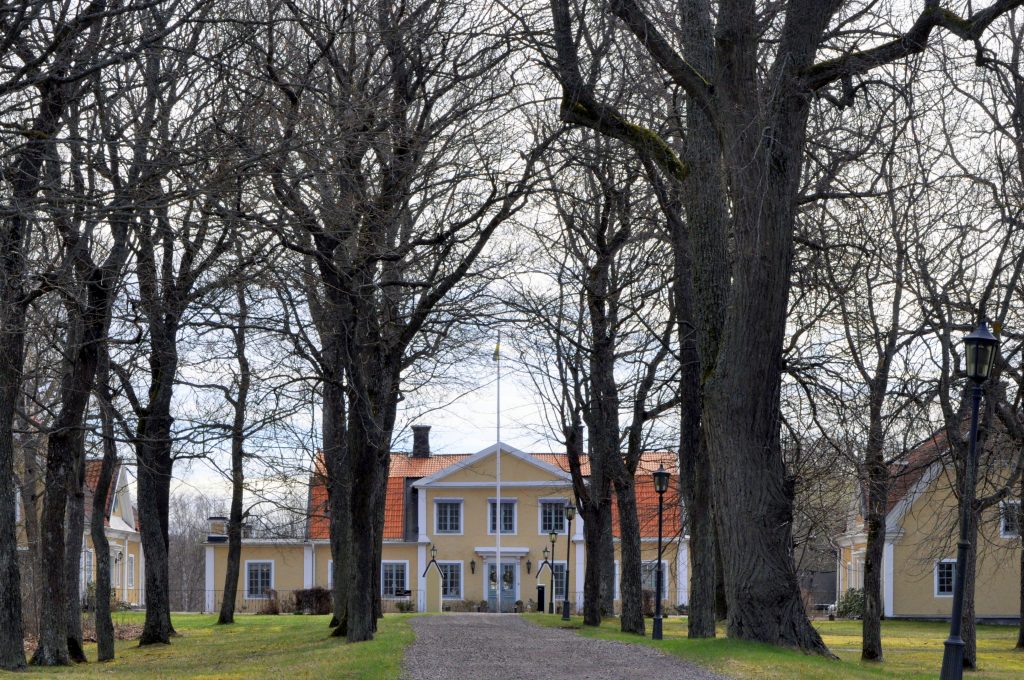 From a distance, through the trees, you can discern the yellow mansion that is Loddby. Loddby was owned by Gustaf Leijedenfrost who was twice Augusta’s brother in law. After both her sisters and her father had died, Leijdenfrost became Augusta’s wealthy benefactor and Augusta and her mother made Loddby their home.

Kerstin and I are finally going to visit the home of Augusta, or at least walk around the house with Augusta as our guide.

“We have, God be praised, spring and the most wonderful, sunny days. Nature has awakened from its long winter slumber and, in its rich diversity, one sees once again evidence of the Creator’s greatness, power, and kindness. The lark sings so elaborately and happily from high among the clouds; the Cuckoo’s monotonous, but all so dear and longed for, ho ho, ho ho, can be heard from the forest; the butterfly flutters around with its mottled wings and gives the welcome kiss to the little blue and red flowers, just sprouted from the ground; the swallows, the little travelers from foreign countries, rebuild their nests under Swedish roofs and cheerfully soar towards the clear, blue heaven. It is really lovely in the country this time of the year; one breathes so easily and feels so happy and so grateful to the One who created the sun, the air, the flowers, the light, and the little winged creatures who give life to this wonderful painting. Worries cannot really get a foothold in our chests when the sun shines so kindly and clearly and everything around us is renewed and rejoices .” (Loddby, 25 May 1851)

Yes, that is how it feels today; the sky is blue, the trees have little bright green leaf buds, a single fly is buzzing around, and high up in the sky there are a few soaring birds. Of course, one can also hear the humming from traffic on E4 close by, but we ignore that.

We park the car behind the mansion and decide to first walk through the woods down to the shores of Bråviken. This is where Augusta’s family would arrive if they took boats for their travels. It was customary to announce the arrival of the boats by firing a cannon.

“… four cannon shots announced that Leijdenfrost was in the vicinity. Mr. Lindgren went out in the boat to pick him up and Mom and I welcomed him on the shore.” (Loddby, August 1850)

“August is home! These words are a goodbye to the joy; they are the Pandora’s Box from which all my pain and discomfort emanate. At 17 o’clock, the ship Göthen anchored and four sailors in red outfits rowed August to shore, but no happy physiognomies met him on his return home.” (Loddby, 23 april 1851)

The still surface of Bråviken reflects the birch trees and willows along the shore and we try to envision the commotion of anchoring ships and firing of cannons; sometimes bringing dear visitors and sometimes Augusta’s not-so-welcome brother.

Walking back up from the shore gives us a view of the back side of the mansion. In 1847, could you see the water from the second floor of the house? Was there a garden on this side? 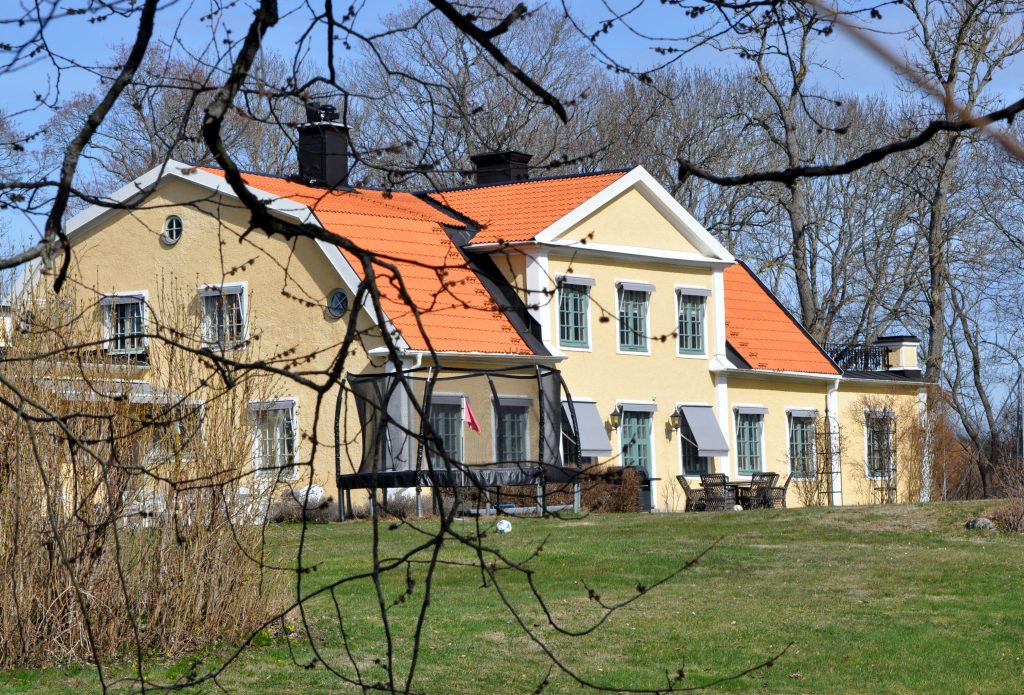 “The rain has come down as if the sky was wide open and the storm is shaking the windowpanes; it is impossible to travel to Fullerstad. Nature has created a revolution and it is very depressing and sad to see how the garden is like a lake and our tall, beautiful maple trees are losing one branch after another.” (Loddby, 29 August 1851)

And looking at the house, there are two chimneys – how many tile stoves (Swedish: kakelugn) were used to heat the house? And which one did August destroy?

“Yesterday evening we once again had a scare by one of the shocking events that time after time happens at Loddby. Malla had put a bag of gun powder by a tiled stove in which August threw a lit letter. Suddenly everything exploded – the entire tiled stove collapsed, all windows broke, and August himself had his whole right side burned. Doctor Åberg has been here today; there is no danger although it is extremely painful.” (Loddby, 28 July 1851)

We walk around the house and view it from the front – it is quite small under the tall trees that seem to have been planted in rows, long after Augusta’s time. 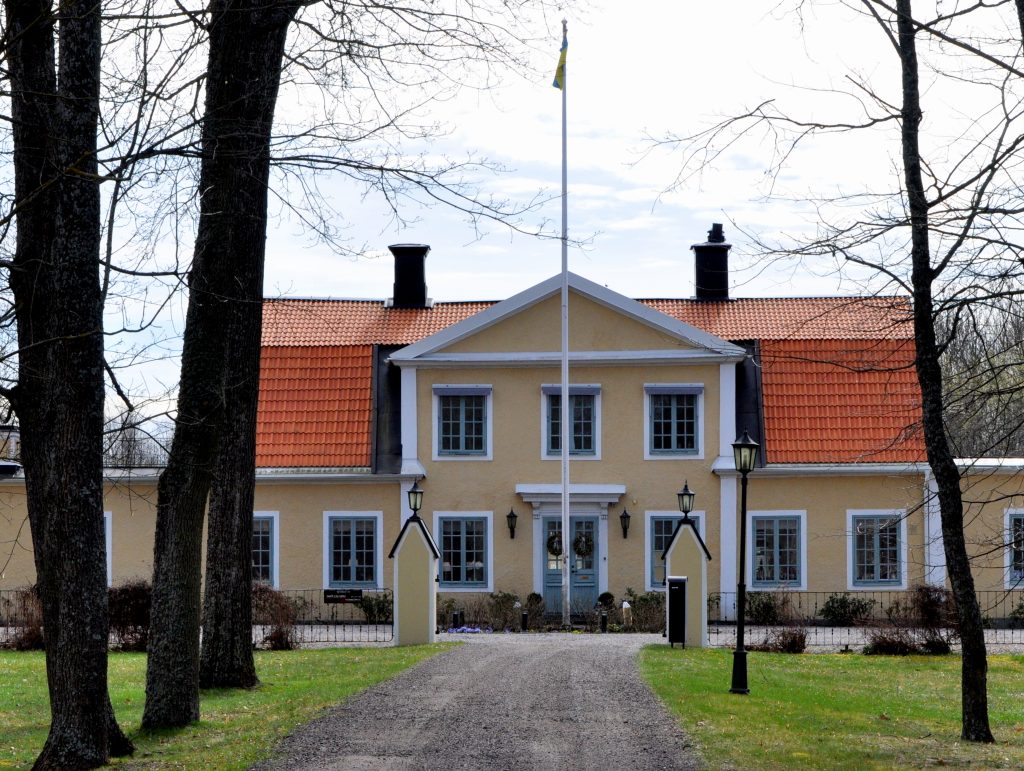 The mansion has two matching wings that create a small courtyard. This is where the guests would have arrived in their carriages. And that was Augusta’s life at Loddby: Who came? Nobody came? How long did they stay?

“They left a while ago; everyone is now asleep. There is a deadly silence in the house, and I sit in my lonely chamber, writing down a few lines from my memory of a day that will never come again.” (Loddby, 25 August 1850)

And when nobody came, Augusta got consolation from her religion.

“Almost a whole sad month has passed since I last wrote a few words in my diary. I have nothing but gloomy days and sad events to write off. We have clothes, we have food, we have health (undoubtedly great gifts of God, who deserves all our gratitude) but there is a saying that when the beggar gets cheese, he also wants to have it fried and this unbelieving beggar is me. 0h! I would so much also have a little peace and joy. When our Lord takes away our calm and peace, he gives us hope as compensation and consolation, but hope finally fails us when we cannot see any end of our battles.” (Loddby, 26 September 1851)

There is another old road that leads from the house, passed an old, red, farm building –maybe a granary? This one could also be from Augusta’s time. 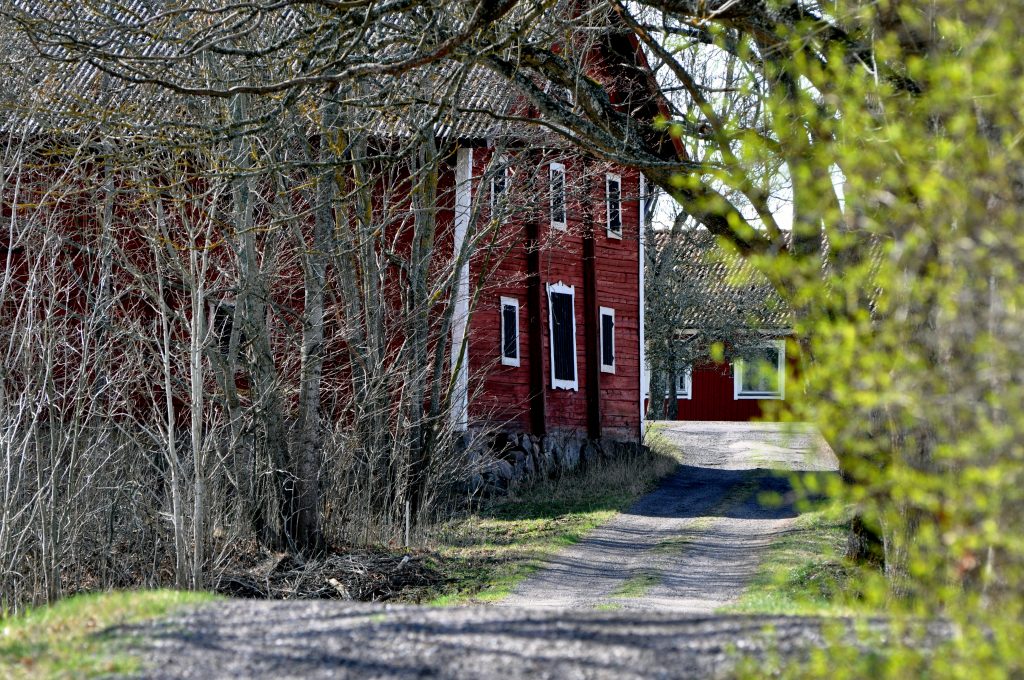 We follow the road, and it is possibly the old road that would lead to Krusenhof. The surroundings are beautiful – maybe this is one of the small fields where Augusta’s mother was growing peas? 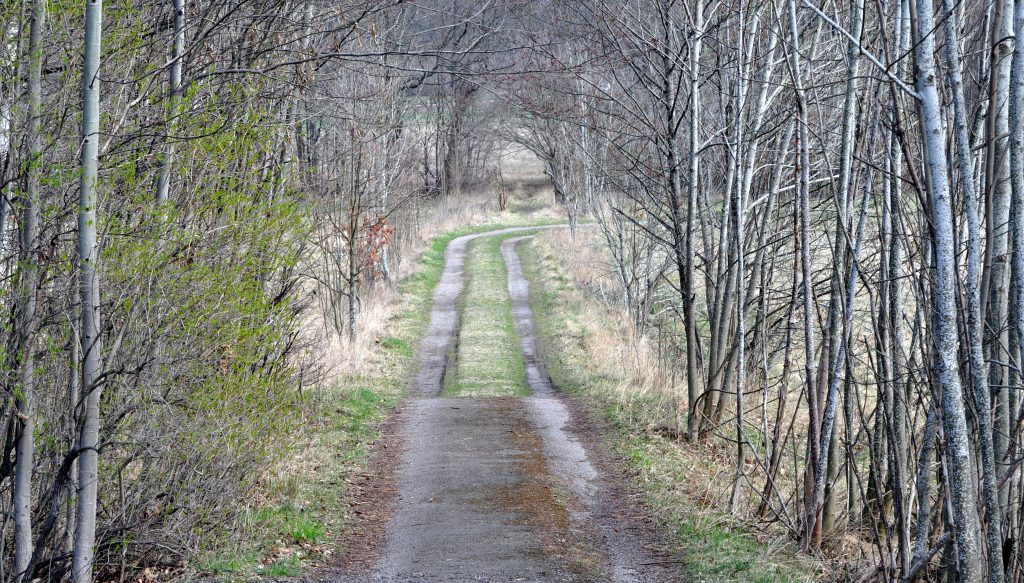 When the sun goes behind a cloud in the sky, the March weather is still chilly, and I wonder how it was during the long winter. That is when visitors were scarcer and the loneliness probably felt more acute.

“The sun is now bidding farewell to our earth, engilding the sky and the tree tops with a blood-red shine. The north wind rages in the branches of the leafless trees and gusts around the corners of our house with a howling sound. It lifts the dry leaves with whirling speed up against the black, rainy clouds, chasing each other over our heads and then dies down to rest as to gather strength to start again with an increased rage. When during such a dark and stormy autumn night, one is in one’s own warm room in front of a nice fire, one values the good life – in contrast to when nature is calm.” (Loddby, 2 November 1850)

“Outside, the pleasant autumn is already in full color, and I have a fearful vision of the cold winter, when one is, in a way, frozen solid to Loddby.” (Loddby, 28 August 1850)

Kerstin and I turn back to the house and our parked car. A snake basking among the sunbaked rocks make us jump. Blue scilla and white anemones are already dotting the meadows. And Augusta’s words summarize our visit to Loddby:

“… the sun shines so kindly and clearly and everything around us is renewed and rejoices.”