Day 2 of our cruise started in Söderköping. This is where Augusta boarded the paddle-steamer Götheborg in August 1850. And here we were, 167 years later, following her travels with her diary as a guide. She was 23 years old, and wrote in her diary that as soon as the boat was moving, she set out to assess her fellow travelers. She was not impressed; instead, she resorted to reading the recently published and popular novel, A Rumor, by Emilie Flygare-Carlen. I was of course curious about the novel and had bought an antique copy of the book and brought along just in case I needed something to read.

Of course I could not read. Our boat was gliding through the canal and giving us a close-up view of summer meadows and bright yellow fields of blooming rapeseed, groves of aspen and birch trees, and cows grazing among yellow buttercups and purple cranesbill. Instead of reading, I stood in the bow with my Nikon camera, trying to catch all the colors. Maybe Augusta would have loved that. 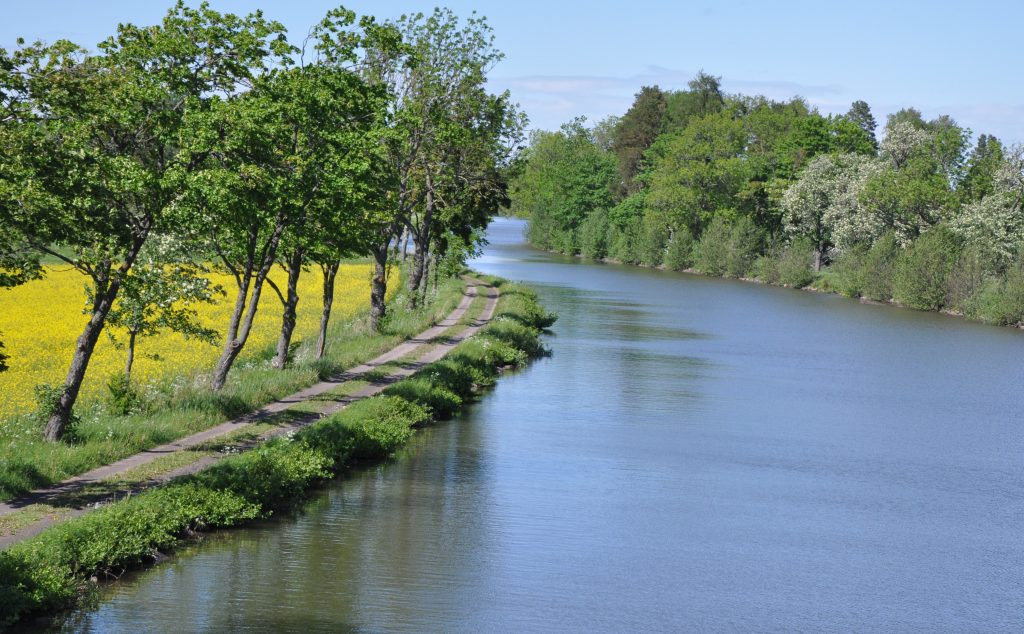 And then, out of sudden, a young dear jumped into the canal, swam across, and jumped up on the other side. Then it was almost out of sight in the tall, green grass.

In this paradise, the only man-made sound was the humming of Juno’s engine. The most amazing sound, that we all marveled over, was the repertoire of the nightingale. The little bird was still singing even though the sun had been up since 4 am. June in Sweden is amazing.

We were making good time, which created a small dilemma when we reached the little town of Norsholm a bit too early. At Norsholm, both the main railroad and the E4 highway between Stockholm and southern Sweden cross Göta Canal. The E4 bridge is very high and we hardly even noticed the bridge. But the railroad bridge has to open for canal boats and for this, timing relative to the train schedules is essential. As we were a little early, the crew took the opportunity to bring the recyclable trash to the appropriate containers close by, and to pick up some groceries as well. Augusta would have wondered about all this!

After Norsholm we entered Lake Roxen and now it was time for lunch.  An appetizer of bread with cheeses and herring was followed by plum baked farmhouse pork with black currant jelly, herb fried potatoes and gravy. We paired it with local IPA beers. The small dining room, with white linen table cloths and fresh flowers, made us remember our etiquette rules and Kerstin and I tried our best to get our wide skirts out of the way, sit straight, and not spill any black currant jelly on our dresses.

As we were waiting for the main course, we heard a loud rattling sounds of chains – was it the boat’s steering mechanism? We asked our most wonderful hostess who laughed and explained that it was the chains of the food elevator that was bringing up our plates from the pantry below. Fascinating!

We had barely finished our meal when we reached the most famous set of locks on the entire canal – the Carl Johan Staircase at Berg. But while Juno was climbing up the 7 connected locks, we had another surprise.

-I will come and meet you at Berg locks, she had said. Just look for a farm hand wearing a big black hat. I will be biking along the canal with my old rake. 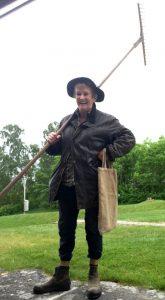 Our good friend is a kindred spirit! There she was, just as promised, biking and waving! Soon we also realized that she might have called the regional newspaper (click on the link to see the video and read the article in Swedish). We were delighted to share our excitement about Augusta’s Journey with the journalist and photographer. What made it even more interesting was that we were now very close to the parish where Augusta was born (Slaka, Östergötland) – so Augusta’s Journey was really local news.

As the rest of Juno’s passengers had made an excursion to a local abbey and were not back yet, Kerstin and I strolled along the canal in the sunshine. Our parasols finally came in handy.

At Heda locks, we all made it back on board. Our captain treated us to a trumpet solo of a Swedish summer hymn while the cruise hostesses had picked bouquets of wildflowers for the dining room. We soon settled on deck to have our afternoon coffee while taking in the ever-changing view of the landscape.

Suddenly we noticed the first of two aqueducts.  The canal was on a bridge spanning over a highway. It must have been a sight for the drivers below to see an old canal boat move along on the bridge above! The aqueducts are fairly recent additions to Göta Canal but Thomas Telford, the Scottish engineer who was the architect of Göta Canal, had already built an aqueduct for a canal in Wales; the Pontcysyllte Aqueduct is now a UNESCO world heritage site.

The next interesting lock was at Borensberg. This is the only hand-maneuvered lock left. All the other locks are electronically maneuvered by local lock tenders. As our cruise was early in the season and the canal was not yet open for private yachts and boats, we realized that Juno had a lock tender that drove ahead to each upcoming lock.

After crossing Lake Boren, we reached our stop for the night – Motala. The sky had taken on a beautiful red hue as the sun was setting. Kerstin and I decided to take a walk in this little picturesque town before ending the day with a cold IPA on deck. Another memorable day! 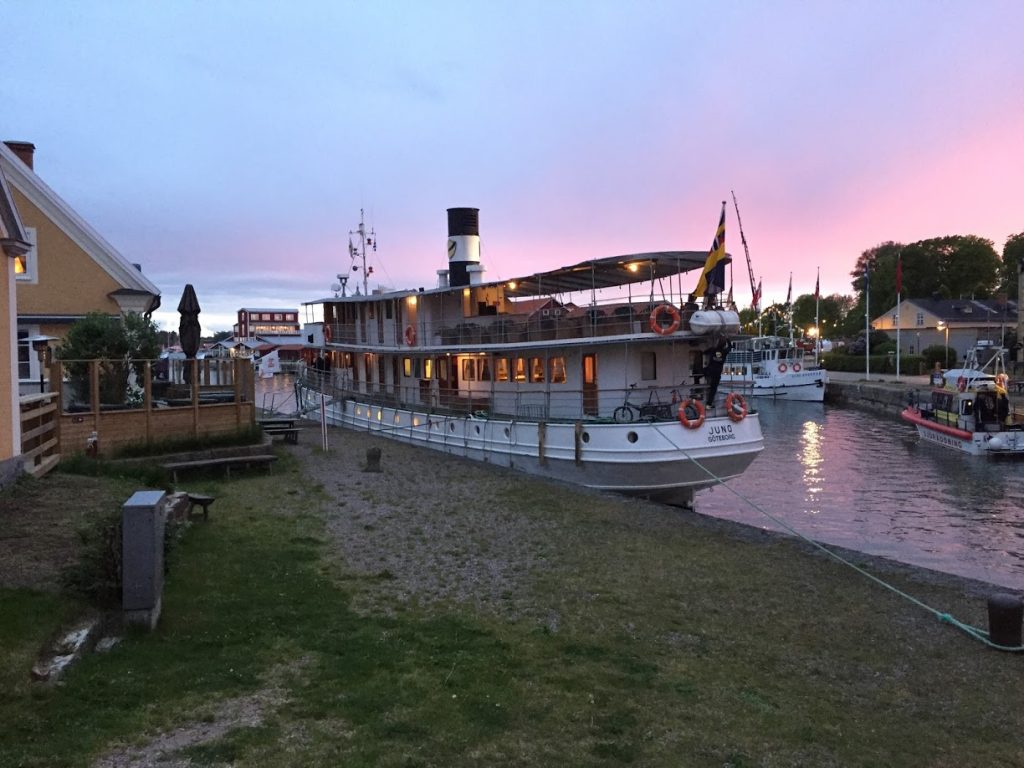 One response to “Göta Canal: Day 2 – Söderköping to Motala”