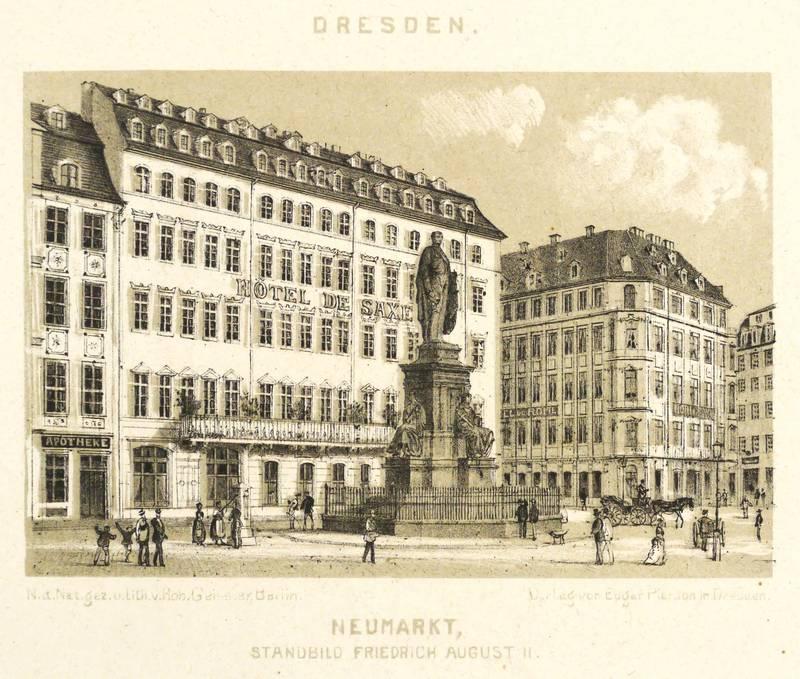 “Early in the morning on the 5 July, we left Berlin behind us and arrived in the evening to the so highly praised Dresden, where we are staying at Hôtel de Saxe, the city’s most splendid hotel.

Our stay here at Hôtel de Saxe is very nice and I would say elegant, if I had not just arrived from Berlin, with its fabulous, luxurious furnishings. There are certainly not, as at Hôtel de Rome, six or seven doormen in livery to greet you on the stairs and to take the things you carry. I have to admit that these elegant and conversable domestics made me embarrassed upon my arrival in the great Prussian capital. Here in Dresden, you miss the elegant, carpeted vestibules and staircases, this wealth of stuffed armchairs, canapés, and sofas; however, Hôtel de Saxe, although not as brilliant as Hôtel de Rome, is both gentile and comfortable.”

Augusta is not the only Swedish woman who has written about Hotel de Saxe. We recently found the writings of Sophie von Knorring who published “Letters home during a summer trip 1846” (Swedish: Bref till hemmet under en sommarresa 1846 av Författarinnan till kusinerna). Like Augusta, she also traveled through Germany and documented her journey. Sophie wrote that they absolutely wanted to stay at Hôtel de Saxe “which is perfectly situated by the grand market at Neumarkt; close to theater, museum, the royal palace, and everything that is worth seeing.” Unfortunately, they did not get rooms on the first floor, but had to go upstairs which seemed to be a big problem for Sophie. But they slept well and met many other Swedes staying at the hotel.

Hotel de Saxe was indeed perfectly situated. It was also famous and had a concert hall. In 1840, Hungarian composer and pianist Franz Liszt stayed at the hotel and gave a concert:

“Liszt arrived in Dresden on the morning of 14 March and secured rooms for himself and his entourage at the Hôtel de Saxe. No soon had he unpacked his bags, however, than he was asked to perform privately at two soirees. At one of these events he joined Dresden violinist Karl Lipinski in a Beethoven violin sonata. Gossip about Liszt must have whetted the appetites of Dresden concert-goers, for the crowded hall of his hotel fell silent, then burst into applause, when he stepped to the piano at his first public appearance on 16 March.”

In 1844, Liszt returned to Dresden and again lodged at Hotel de Saxe and again gave a performance at the hotel.

Franz Liszt Fantasizing at the Piano (1840), by Josef Danhauser

The hotel continued to be a premier hotel in Dresden. Bradshaw’s Continental Railway, Steam Navigation & Conveyance Guide (1853) describes the hotel as “a first-rate, capital house, highly recommended” and includes the following advertisement:

Hotel de Saxe – This old-established House, having upwards of 250 beds, reputed one of the best in Europe, is still conducted with the utmost attention to cleanliness and comfort, which has hitherto given so much satisfaction the English Nobility and Gentry. This { ? } will be found one of the largest and most comfortable. Baths in the house.

So what happened to Hotel de Saxe? 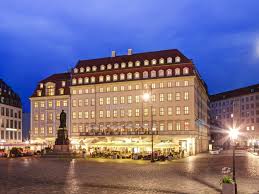 The hotel was demolished in 1888 and replaced by a neo-baroque post office. During the bombing of Dresden in 1945 and the resulting firestorm, the Neumarkt area was completely destroyed. After the German reunification in 1990, a decision was made to restore Neumarkt. One of the buildings to be restored was Hotel de Saxe. In April 2006, Hotel de Saxe again welcomed guests to Dresden.

Wouldn’t it be fantastic if we could re-create Augusta’s stay at Hotel de Saxe!