Lübeck and the Buddenbrooks

The Business Contacts in Lübeck

We have never been to Lübeck. Nevertheless, each day, we walk the streets of Lübeck, but in the world described by Thomas Mann in his book about the family Buddenbrooks. It is a fascinating book about 4 generations of a bourgeoisie family in the old town of Lübeck in the 1800s. Augusta’s world, but in Germany!

Augusta started her journey in Lübeck in July of 1847 and, therefore, that is where we will also start our journey through Germany.

Augusta brother-in-law, Gustaf Lejdenfrost, was a textile manufacturer and later a wool importer with business connections in Lübeck. The business contact was A.P. Rehder, whose family took care of Augusta and her mother on their arrival. 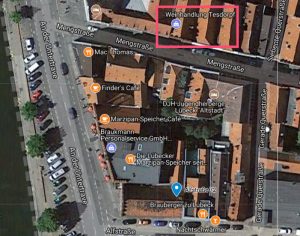 The Rehders lived at Alfstrasse 72 (in today’s numbering, Alfstrasse 41). When looking up the address in Google Maps, a familiar name showed up on a parallel street, Mengstrasse: Weinhandel Tesdorpf. One of Augusta’s best friend at home in Norrköping was Mina (Vilhelmina) Tesdorpf, whose father was the wine merchant in town! This could not be a coincident.

A genealogy search revealed that Mina was indeed related to the Tesdorpf family with the wine shop on Mengstrasse. Mina’s grandfather was Peter Hinrich Tesdorpf (1746-1811), who in 1782 married Susanne Schyler in Bordeaux. Mina’s father, Johan Jakob Tesdorpf (b. 1799), was the youngest of 8 children. He moved to Sweden and established himself in Norrköping as a wine retailer. He became very successful and his house in Norrköping is still standing.

Besides Johan Jacob Tesdorpf, his nephew, Franz Hinrich Tesdorpf, was also a wine merchant in Norrköping.

Did Augusta visit the Tesdorpf’s in Lübeck? She doesn’t mention them in her diary. But we will sure visit Weinhandel Tesdorpf  on our trip and try some of their famous Rotspon.

The history of Johan Jakob Tesdorpf  (in Swedish) can be found at https://norrkopingprojekt.wordpress.com/historia/norrkopings-gamla-gardar-och-hus/del-6-tesdorpfska-huset/

Mina Tesdorpf married Albert Schubert who was related to Augusta.  They had 11 children of which  5 survived. Their life story can be found at http://www.augustasresa.se/familj/en-kvinnas-sorg-pa-1800-talet/