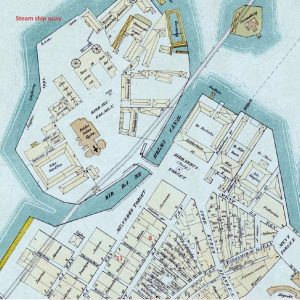 “Since Saturday evening I am here in Stockholm, our Swedish Paris, the dance-hungry’s Eldorado. Our journey here was miserable; unfavorable road conditions for the sleigh and grey, chilly weather. We ate bad food and slept miserably in cold, unpleasant lodgings, chatted with drunk coachmen, drank mulled wine, and finally arrived frozen and exhausted to our nice and beautiful Stockholm where we took in at Hotel Norrköping on Stora Nygatan. The day after our arrival, we waded through deep dirt to get to our friends on Kungsholmen where we became heartily received, had a pleasant evening, and dreamed us back to winter evenings at Krusenhof.”

Even though it is of little importance, I just had to find where Hotel Norrköping was located. Does the house still exist in Stockholm’s Old Town? I had googled and searched old newspapers but this hotel just eluded all my searches. There would have to be better ways to look for this hotel.

A couple of weeks ago, Kerstin and I visited Stockholm’s City Archives and asked for suggestions. Despite their help, we still couldn’t find anything about this hotel. The archivists suggested looking for ads in old newspapers. But I had already searched the digitized newspapers and found nothing.

Then Kerstin and I walked the street Augusta mentioned, Stora Nygatan, and looked at buildings that might have been from this time – just for fun and on the way to Vapiano for lunch. Which house could it have been? 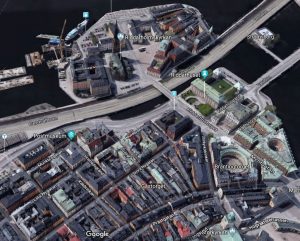 Last weekend I visited the Royal Library (KB) in Stockholm. It is the repository for everything that has been printed. It was then that I realized that KB had many digitized newspapers that I had not been able to find in other archives.

Searching for the hotel in KB’s archives actually gave me the results I had been looking for!

Hotel Norrköping showed up in advertisements but depending on the year, there were two different addresses for this hotel. Maybe it moved? The address was Stora Nygatan 8 in 1858 and Lilla Nygatan 11 in 1863 and 1866. The two streets are parallel and the two addresses are very close to each other (see image above). In the late 1860s, the hotel was mentioned as having closed.

At Hotel Norrköping
(Stora Nygatan No. 8) Several well furnished rooms for rent by month or until 1 April for bachelors or travelers.
(Stockholms Dagblad, 10 November 1858)

The hotel was also listed in a travel guide,  published in 1866. There, the address is Lilla Nygatan 11.

I still have not found any pictures of the hotel, but the two houses still exist so, most likely, there would just have been a small sign over the door with the name of the hotel and the rooms would have been ordinary –  probably nothing worth depicting in a newspaper ad.

What have I learned? That there are many archives that are not searchable by search-engines like Google. One has to familiarize oneself with all the different archives and then be very creative in how to search.

Two singers who have not previously sung in here in the city wish to get an engagement. Messages can be left at Hotell Norrköping, Lilla Nygatan N:o 11, rooms 6 and 7. (Aftonbladet, 30 November 1863)

And sometimes one is rewarded by a little luck.