Schools for Girls in Stockholm

Schools for Girls in Stockholm 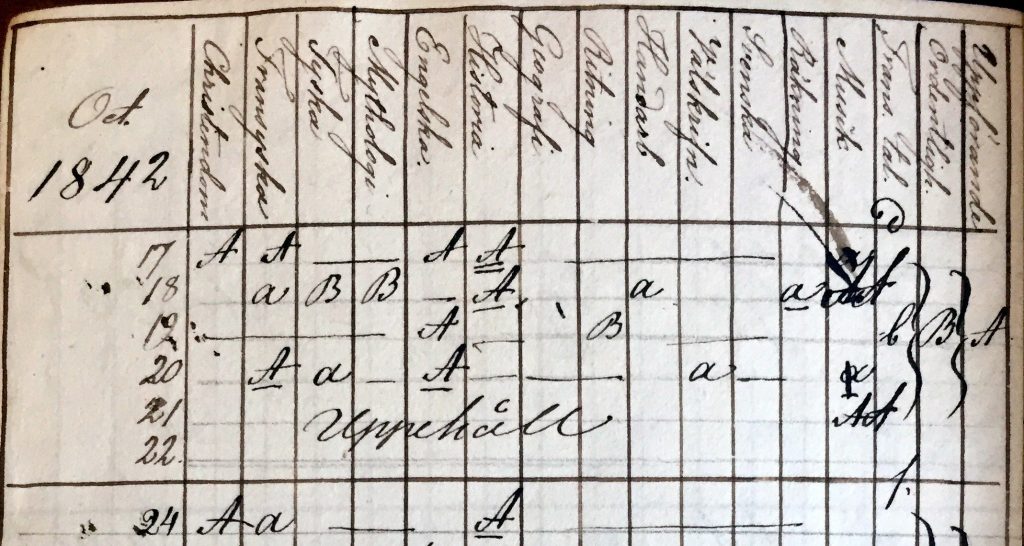 Augusta was enrolled in a private girls school in Stockholm from October 1841 untIn 1842, there were two well-known private schools for girls in Stockholm – Wallin’s School (Wallinska Skolan) and Bjurström’s Pension (Bjurströmska Pensionen).  Was either one of those the school Augusta attended? And how did a wealthy rural girl end up in a private school for girls in Stockholm? The only record we have is her grade book from October 1841 to December 1842. So she started school in Stockholm when she was 14 years old.

The quest to find out more about her friends in Stockholm and the possible schools she could have attended seemed to lead nowhere. So how about looking for diaries of contemporary girls who had attended one of these private schools and were, or became, famous enough to have their diaries published? Maybe that would provide names of friends and teachers, and possibly some connection with Augusta.

I found two girls who met these criteria: Marie-Louise Forsell and Ebba Ramsay. 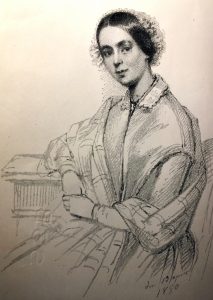 Marie-Lousie Forsell was 4 years older than Augusta. Her diary from November 1842 to December 1848 was published under the title “Social life and home life in Stockholm during the 1840s” (Sällskapslif och hemlif i Stockholm på 1840-talet). The book is very interesting and is true to the title – details of social life and home life but nothing about school life. In 1842, at the age of 19, she had most likely received all the education necessary for a girl, and for a life as a wife and mother.

Ebba Ramsay was a year younger than Augusta. She published her diary in a book named “About bygone days: From an old diary” (Om flydda tider: Ur en gammal dagbok), and she does describe her schools and friends. Her grandmother was an old friend of Olof Wallin, the bishop who encouraged the establishment of a school for girls. He thought that a school for girls should have a higher aim than teaching girls to speak French and play the piano. The school opened in 1831 and was named Wallin’s School (Wallinska Skolan). Based on some wording about the aim of the school, it seems like it was a 4-year program.

Ebba describes her education in her book: 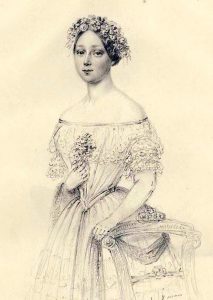 “At the age of 10, I was sent to school. The teacher, Miss Limnell, was at the time considered to be a “wonder of knowledge” [Between 1836 and 1840, she was the principal for the girls in the school]. Many new teaching methods were introduced in the school, for example a rich amount of visual aids, like stuffed animals, dried plants etc. How I enjoyed the happy life with friends and the good lessons! I felt a need to devour all the books and their contents during those years.”

“Great grandmother completely disliked that girls should study, but I was not at all interested in house chores and didn’t think my help was needed at home as our domestic help, my mother, and my aunts all took care of the household.”

“I was soon, although the youngest, the best student in my class.”

When Miss Limnell (married name Schwartz) died, Ebba asked her parents to enroll her in the other premier school for girls in Stockholm: Bjurström’s Pension. According to Ebba, the school had very good language teachers. Most of the students came from the upper social class. The school was small; there were only two classes. Ebba liked this new school and noted the beautiful rooms in the airy apartment.

In the diary, she describes her friends, both in school and those with whom she took communion. I compared the names with Augusta’s friends and found no matches.

One of Ebba’s friends from Wallin’s School was Fredrique Unge. She was the same age as Marie-Louise Forsell but she is not mentioned in Marie-Louise’s diary. She graduated at age 16 and then became a private tutor. Later, she married Gustaf Hammarstedt, a pastor, and in 1855 took over the management of the school that had initially been Bjurström’s Pension.  Her life is chronicled in a series of articles in the magazine Idun by one of her students, Gurli Linder.

In trying to find some link between Augusta and Ebba, I searched the church archives’ records of First Communion. Both Augusta and Ebba had bible studies for the same pastor in the Jacob Parish. Augusta had her first communion in 1844 and I found her name and that of Cecilia Koch, one of her best friends. In the book for 1845, I found Ebba and one of her friends. But as Augusta and Ebba were a year apart, they did not take bible studies together. So, no leads there.

What was most interesting with these archives was the ranking of names. All boys were listed first followed by the girls. For each student, the father’s title was listed and the students were listed according to the status of their fathers. Listed first were children of noble families or whose fathers had important government positions, followed by children of officers, and then of wealthy merchants. At the bottom of the list were children whose fathers were servants or had unknown occupations.

So I haven’t found anything new about Augusta’s schooling, but I have now a list of teachers and students and more leads to follow. And maybe another visit to Stockholm’s City Archives would be useful – some documents from Wallin’s School have been archived. 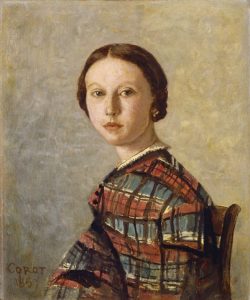 By reading diaries of other contemporary young girls, I have become very familiar with social life and home life of wealthy girls in Stockholm in the mid 1840s: concerns about clothes, excitement about invitations to balls, lieutenants with good looks, occasional arguments with the parents, aunts, and grandmothers, and thoughts about marriage. Because what would a girl do once she graduated from school? There were very few choices: get married, or make a living as a private tutor, nanny,  companion to some elderly woman, or a seamstress.

The discussion about the aim of educating girls, which had started in the first decades of the 1800s, continued. Augusta would have been very happy to know that in 1866, the Swedish parliament established a committee to study the aim of public schools for girls, and that her future husband, Adolf Leonard Nordvall, was asked to lead this committee. He was a staunch supporter of women’s education.