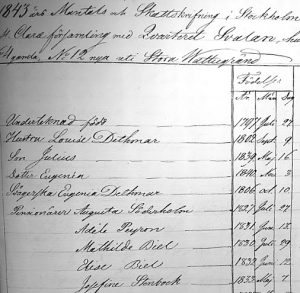 Augusta attended Mrs. Edgren’s school in Stockholm from the fall of 1841 through the spring of 1844. She boarded with the Edgren family together with 4 other boarders or “pensioners”: Adèle Peyron,  Mathilde Biel, Elise Biel, and Josefine Stenbock. The school closed in the summer of 1844 but the following school year, Mlle Andriette Frigel had taken over at least some of the students and Adèle, Mathilde, and Elise were now boarding with Mlle Frigel. 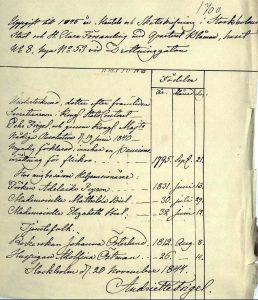 Adèle’s life story was chronicled in a previous blog. Who were the other girls, the sisters Biel and Josefine Stenbock?

Mathilda (Mathilde) Carolina Sofia and Emilia Elisabeth (Elise) were sisters. Mathilde was born in 1830 and Elise in 1832. They also had an older brother, Fredrik August, born in 1829, and a younger brother, Carl Axel Hugo, born in 1833. Their father was German-born Christian Friedrich Biel and their mother was Augusta Mathilda Hasselström.

Christian Friedrich Biel and his business partner, Johan Albert Kantzow, started in 1808 the company Kantzow & Biel, one of the largest export and import firms in Stockholm. The company was also a major exporter of iron to the US. In 1824, Kantzow and Biel petitioned the US Congress regarding import duties levied on their iron shipment:

Journal of the House of Representatives of The United States, Being the Second Session of the Eighteenth Congress, Begun and Held at The City of Washington, December 6, 1824, and in the Forty-Ninth Year o the Independence of the United States.

When Christian Friedrich died in 1839, Kantzow continued running the company.

So why did Mathilde and Elise’s mother decide that the girls should board with Mrs. Edgren and then with Mlle Frigel when she and the children lived in Stockholm? Being a widow with 4 young children who needed schooling might have been difficult. And as the family could afford it, it might just have been more convenient to have the girls live with their teacher.

It is also possible that she was not in good health. She died in 1847, at the age of 44. The cause of death was listed in church records as “wasting” (Swedish: tärande).

Mathilde, or Matilda, married Olof Nordenfelt in 1852. Olof was born in 1826 at Björneborg in the province of Värmland. When his father died, he inherited the estate and its ironworks. He became chamberlain at the royal court in 1860 and a member of parliament in 1867. They had 9 children and many grandchildren. Mathilde died in 1888 at the age of 57.

Elise, or Elisabet, married Victor Edman in 1850. Victor was born in 1813 in Stockholm and this was his second marriage. His first wife died following the birth of their second son. Between 1856 and 1870, the family lived at Svanå in the province of Västmanland. Victor was the majority shareholder and manager of the Svanå ironworks. Today, Svanå is a conference center and 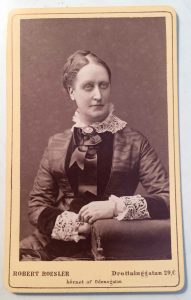 In 1870, the family moved to Stockholm. They bought a house in the same block as where Elise and her sister had lived with Mrs. Edgren! The house was just around the corner from Mrs. Edgren’s school. They also rented a small farm, Edeby on the island Lovön.

Elise also had her portrait taken by Robert Roesler who in 1877 opened his photography studio on Drottninggatan 29 C in Stockholm. 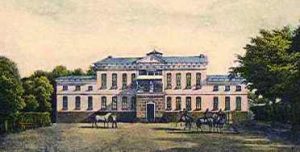 Josefine belonged to a very old, noble family in Sweden. Her full name was Baroness Josefina Albertina Charlotta Fredrika Lovisa Stenbock. Her name appears in documents as Josefina, Josefine, Josephine, and Josephina – spelling variations were very common in the 1800s. She was 6 years younger than Augusta, born 7 May 1833 at Torsjö estate in Skåne. Her father, Count Magnus Albert Carl Gustaf Arvid Stenbock, was a chamberlain at the royal court and had also been an adjutant to the crown prince. Her mother was Countess Jeannette Margareta Hamilton. Josefine had an older brother and three younger siblings. Her youngest sister Sophia was born in 1843. According to genealogy websites, all of them were born in Skåne. It thus made sense that Josefine was sent to a boarding school in Stockholm.

In 1857, Josefine married Chamberlain, Count Jacob Fredric Theodor Uggla. With the marriage, she became a countess. They had two children, Margareta Charlotta Johanna Fredrika born in 1858 and Carl Otto Knut Teodor born in 1859. Sadly, her husband died in 1864 at the age of 34 and interestingly, he died in Dax, a small town in south-west France. Dax was famous for its hot springs and was the first established spa in France. Did he have tuberculosis? Did Josefina travel with him?

Josefine’s son, Carl Otto, emigrated to America and took the last name of his maternal grandmother – Hamilton. He became a captain in the US army and participated in the Spanish-American War. He married, had 6 children, and died in 1933. According to genealogy sites, he was also an artist (painter).

Josefine also did not live long. She died in 1881 at the age of 48 in Copenhagen. 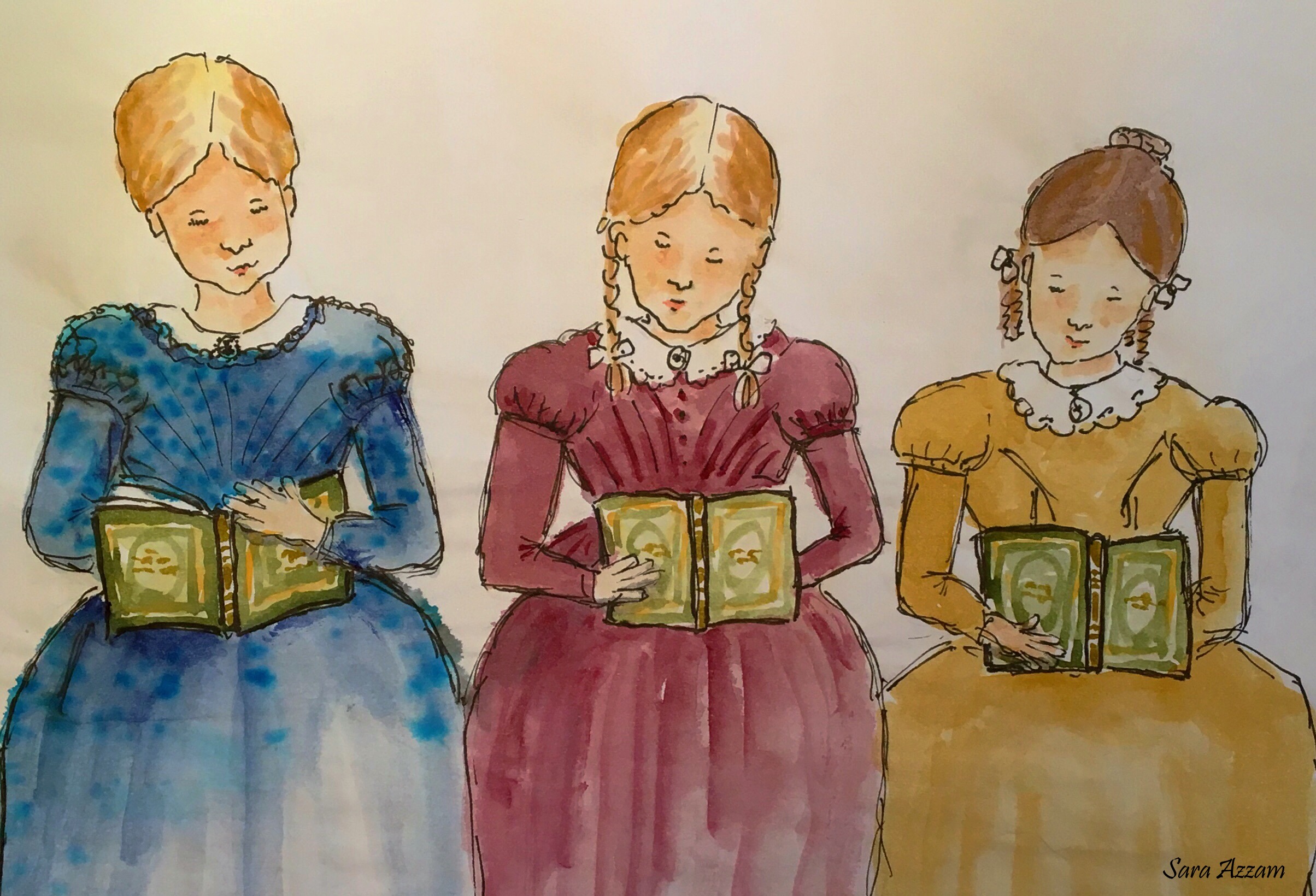 My illustration of how I imagined the three girls looked when reading in Mrs. Edgren’s class.