Two Dresses in Parramatta and a Book about Domestic Life

Two Dresses in Parramatta and a Book about Domestic Life

My own beloved Augusta! 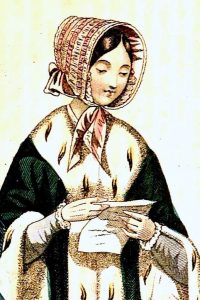 I should probably start by thanking you for your good wishes for the new year. I thank you for your wish that my heart will be free and I share your thoughts that one is happiest that way. I have received a very opposite wish from Dora; she wished that I would seriously fall in love with someone. Let’s see whose wish will come true by the end of the year. I am on your side so there are two wishes against one.

Have I written to you in the New Year and sent my well-wishes? I think so. If not, you know that I wish you all the best. My good friend, what many Christmas presents you got! It is a shame that they will not be seen in Stockholm this winter. You wish to hear mine; although they did not measure up with yours, I was completely satisfied. Here you have them:

What did Augusta get for Christmas in 1845? Maybe similar items. Clothes and accessories were obviously important Christmas gifts for 19-year-old women.  Did Augusta also get clothing made of Parramatta – beautiful and modern?

I had never heard of Parramatta before and had to look it up. Parramatta was a type of fabric that became popular in the 1840s. Many advertisements in the daily papers, both in Norrköping and Stockholm, listed Parramatta among the fabrics for sale. So what was it? 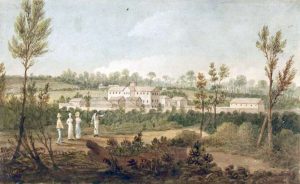 Parramatta is a suburb of Sydney, Australia. In the 1840s, it was a British settlement. It was famous for its woolen mills and infamous for The Parramatta Female Factory. The factory was a penitentiary for women convicts who were sentenced to labor in the form of manufacturing woven cloth for export. It also served as a workhouse for incapacitated women. The factory opened in 1821 and in 1827, the women rioted because of cut in food rations and poor conditions. In 1842, over 1200 women and children lived in the factory. By 1848, the factory closed.

Parramatta as a Textile Term

Most of the fabric exported from Parramatta was wool fabrics. In textile terms, Parramatta refers to a light, twill, dress fabric with a silk or cotton warp and a woolen weft. So Parramatta fabric could be produced in Europe as well as being imported from Australia. Lotten’s dress fabric could have come from the Parramatta Female Factory or from some textile mill in Europe. But to Lotten, it was simply beautiful and modern.

The Book: Accounts of the Domestic Life 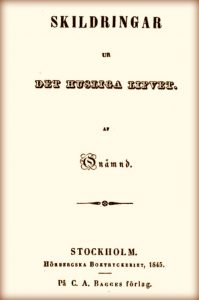 If there had been a bestseller list in December of 1845, Accounts of the Domestic Life would have been on the list. The book, “Skildringar ur det Husliga Lifvet” was penned by Anonymous.

The real author was Anna Fredrika Ehrenborg, born Carlqvist (1794-1873). She was deeply spiritual and a follower of Swedenborg.  I don’t know if Lotten liked the book, but it would have been the kind of moral book a young woman should read.

I am sure Lotten never wondered about Parramatta manufacturing or why her gifts were considered suitable for young women.  She was “completely satisfied” with her gifts. And I am sure the dresses and accessories were beautiful, just like those depicted on the fashion plates  – the fashion in Stockholm, 1845.