Who was Tante Cordier?

Who was Tante Cordier? 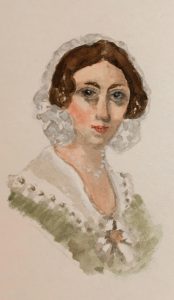 I couldn’t find any picture of Tante Cordier, so I painted a miniature portrait of how I think she looked.

Last week, I wrote about the time before sidewalks, about winter in Stockholm, and how nice it was when the dirty slush in the streets froze. Augusta’s friend Lotten had described it in a letter to Augusta. Lotten also wrote about taking a walk with the lovely Tante Cordier.

I don’t remember having seen that name before in any of Lotten’s letters to Augusta.

“This morning when I woke up, I saw through the window a clear blue sky and was told that it was below freezing outside. You know how happy one gets about dry streets after walking in dirt, 2 feet deep. I hurriedly dressed and, accompanied by my lovely Tante Cordier, walked far, far out, admiring and delighting in the glorious nature. Is there anything more lovely than a clear winter day? It made me so happy and it will keep me going for a whole week in case the weather gets dreadful again.” (Lotten’s letter to Augusta, dated 24 November 1845)

In search of Tante Cordier

So who was Tante Cordier? When I look for someone in Stockholm, I usually start with the digitized census records. This time, I search for Cordier but there are no results for 1845.

Church record of Tante Cordier in 1844

After the census records, I usually check the church records. Besides the government, the Church of Sweden also kept an eye on the citizens. Each household was subjected to a yearly household examination, making sure that the inhabitants could read the bible (and were vaccinated against smallpox!). Within each parish, the results of the examinations were recorded in the church ledger, sorted by city block and house number – listed the way it would have been recorded by the pastor as he walked down the street and visited each family. The records are now digitized, but they are not searchable, so reading through the ledgers is like visiting each address and checking in on each household. It is time-consuming to look for someone, but it is also pretty fascinating.

Since I know Lotten’s address, I decide to start there. I could always just check on her neighbors as well. Tante Cordier would probably have lived close to Lotten.

Widow, Wife of Professor, M.C. Cordier de Bonneville reads the entry. She lived at the same address as Lotten. 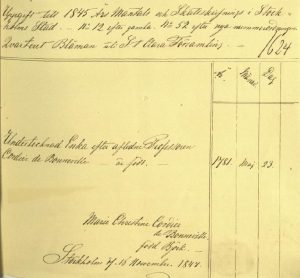 Now that I know her full last name, I go back to the census records and find her handwritten declaration for the 1845 census.  Marie Christine Cordier de Bonneville was the widow of professor Cordier de Bonneville. Her maiden name was Björk and she was born 23 May 1781.

With the unique name and title of her husband, I am sure Google will find him.

Professor Bonneville was born in Amiens, France in 1766. He was a painter and an engraver. In 1798, he moved to Sweden to work on the engravings of a series of paintings “Voyage Pittoresqe de la Suède“. The final series consisted of 19 plates, finished in 1802. Some of his engravings can be found at the Swedish National Gallery.

Bonneville was also a teacher of French and was appointed as professor of French at Karlberg, the military academy in Stockholm. There are amusing stories about Professor Bonneville by Wilhelm von Braun and others from this time. There is even a story about him and his wife, our Tante Cordier, who he referred to as his “little friend”.

Tante Cordier and her husband didn’t have any children but they had a foster daughter, Sophia Carolina Eleonora, who took the name Cordier. Professor Bonneville died in 1843 – 2 years before Lotten’s and Tante Cordier’s winter walk.

It is amazing how a single name in a letter can lead to stories and pictures and add to the knowledge of a time and a place. I now see Tante Cordier, her colorful French husband’s “little friend”, and imagine how she and her husband went to the theatre together. He was fond of food and they probably had nice dinners. Maybe they had his paintings or etchings framed in their parlor.

I am sure Tante Cordier was delighted to have Lotten as a neighbor.

The view of the town Gustavia on the island of St. Barthelemy. Engraving by  J. A. Cordier de Bonneville