Last week, I wrote about Augusta’s lieutenants – the ones she met at balls, theatres, and concerts. The image for the blog was a painting of Lieutenant Bergenstråhle dancing with a girl in a yellow ball gown. The painter, Fritz von Dardel, had “tagged” her as E. Schwan.

In another painting, von Dardel also included her and tagged her as Elisabeth Schwan. At General Peyron’s Ball, 19 Dec 1844. Elisabeth Schwan is the dark-haired girl in the lilac dress. Painting by Fritz von Dardel.

Who was she? Did Augusta know her? Was Augusta at this ball? Is she one of the girls in the background?

Since I had not seen her name among Augusta’s school friends, I decided to check if she and Augusta might have known each other through church. I searched the 1844 records of first communion in the archives for Jacob’s Parish in Stockholm. Sure enough, Elisabeth Mathilda Schwan, born 2 February 1828, was listed as the 5th girl in the class, according to the social rank of the father (Augusta was listed as number 10; Elisabeth’s father was a wealthy merchant).

So, Augusta and Elisabeth were friends! 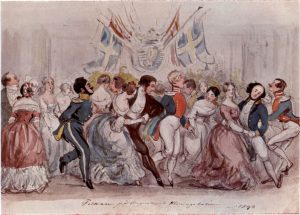 Another ball in 1844. Elisabeth’s father, J. G. Schwan is the first gentleman from the left. Painting by Fritz von Dardel. 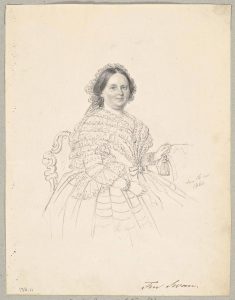 It didn’t take long to find out more about Elisabeth’s family. Her father, Johan Gustaf Schwan (b. 1802), was a wealthy merchant who had married his cousin, Augusta Eleonora Schön. She was the daughter of another important merchant in Stockholm – Johan Schön (b. 1781).

I was already familiar with the wealthy family Schön. The mother of one of Augusta’s friends, Adèlaide (Adèle) Peijron, was born Schön. After some genealogy searches, I found out that the mothers of Elisabeth Schwan and Adèle Peijron were sisters.

So Elisabeth and Adèle were cousins!

Elisabeth must have been a favorite of von Dardel as he singled her out in two of his paintings. So what happened to hear in life. Who did she marry?

Another familiar name from Augusta’s diary. Or did we get that wrong? In an earlier blog, I wrote about a young man in a straw hat that Augusta met on a Göta Canal cruise in July of 1850. He was from Stockholm and his name was Cassel. I had concluded that it most likely was Knut Cassel. But if Augusta knew Elisabeth, and Cassel was engaged to Elisabeth, wouldn’t they have made the discovery that Augusta knew Cassel’s fiancé? Wouldn’t she have mentioned that in her diary? So in retrospect, it was probably not Knut Cassel who was the fellow passenger.

Knut Cassel was born in 1821 and had studied law at the university in Uppsala. In 1843, he got a position in the Department of Finance in Stockholm.

There is one more Cassel mentioned by Augusta. In the spring of 1846, Augusta asks her friend Lotten if it is true that Lieutenant Cassel has left for Russia. Lotten assured her that the rumor was true. Now, who was this Cassel? I search for lieutenants with the name of Cassel, and there are several in 1846. We’ll probably never know who Augusta referred to.

Elisabeth Schwan in 1855. Drawing by MariaRöhl.

Anyway, Elisabeth and Knut had a long life together. They had 5 sons and in 1860, the family purchased a castle from the royal family – Stjernsund. Today, it is a museum. Kerstin and I are planning on visiting it on our Summer Sejour in June – wearing our new summer dresses! 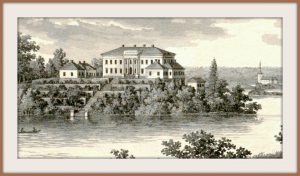 Stjernsund Castle in the 1850s

2 responses to “The girl in the yellow ball gown: Elisabeth Schwan”