Mrs. Brandt, the seamstress who left few threads to follow

Mrs. Brandt, the seamstress who left few threads to follow 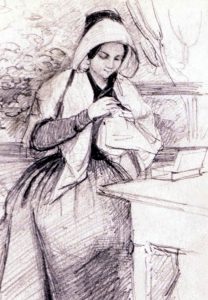 Today, on the International Women’s Day, I thought about Mrs. Brandt. A sought-after seamstress who didn’t leave many historical threads to follow. All her handiwork is long gone – dresses and shirts all worn out. The only traces of her are a few sentences in Augusta’s diary and in letters between Augusta and her mother Anna.

Mrs. Brandt was never mentioned with a first name. She was simply referred to as Mrs. Brandt, Branta, or Brandtan.

“Mrs. Brandt is here since yesterday, altering a few of my dresses.” (Augusta’s Diary, Loddby, 21 August 1850)

“We were at Krusenhof last Wednesday. Little Nann bought my red silk dress. Brandtan was there, sewing a whole outfit for their move to Stockholm, which is planned for Christmas and then, in God’s name, it is the end of that joy.” (Augusta’s Diary, Loddby, 28 November 1850)

“Soon after the New Year, I will take Branta here to help me sew Lejdenfrost’s shirts and also August’s. She is now with Thoréns in Qvillinge.” (Letter from Anna to Augusta, Loddby, Autumn 1852)

“Branta was here for two days and August and she did not get along. She had said something about him that he was angry about. She left 10 Rdr that I put in your seashell.” (Letter from Anna to Augusta, Loddby, 27 November 1852)

“Branta came out < ?> drunk and has now been in bed for 3 days. They have now taken her to Skärlöta to sew a wool dress for the wife and alter a coat that the wife inherited from her mother. We’ll probably berate her when she comes back; she’s really mean and wants to pit people against each other.” (Letter from Anna to Augusta, Loddby, Winter 1852 – 1853)

“Branta asked me to send you her regards, also Malla.” (Letter from Anna to Augusta, Loddby, Winter 1853)

“If you could let me know when in June you are planning on coming home because then we will need Branta and she is now sought after in several places.” (Letter from Anna to Augusta, Loddby, Spring 1853)

“… my Branta has sewn 1 ½ dozen shirts. And put new breasts and collars on a dozen and finished 6 quilts for you. This is easily said than done. Branta is now sewing on a cardigan for me and then she will sew your mantilla, which is well washed, and a little else she will sew for me. I have 14 days before she goes to Tåby where she will be until June 5th when she will be at your disposition.” (Letter from Anna to Augusta, Loddby, May 1853)

“We, Branta and I, are now stuffing your quilts. There will be 4 single-size quilts and 2 for the people. Lina is sewing your everyday sheets and Malla does nothing but ironing.” (Letter from Anna to Augusta, Loddby, Spring 1853)

Who was this traveling seamstress?

Kerstin and I have discussed Mrs. Brandt many times. When we are making our own dresses, we comment on how Mrs. Brandt would have worked at a time before sewing machines. 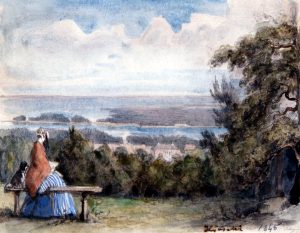 This is how I envision Mrs. Brandt, the traveling seamstress. Painting by Fritz von Dardel 1845.

Mrs. Brandt was a traveling seamstress. She went from one family to the next, helping them make or alter clothes. And she helped with Augusta’s trousseau. Given this lifestyle and the fact that she was referred to as Mrs., she was probably a widow. A woman who had to make a living and stayed with various families as she did the work.

How do you search when all you have is a family name and an occupation?

Who was Mrs. Brandt?

Where do you even start searching for a seamstress whose last name was Brandt? And when that is all the information you have.

Google is of no help with so few unspecific keywords. Then there are the Household Examination Records kept by each parish, but then you would need to know in which parish she lived.

Kerstin and I discussed the dilemma this week. Should we just gang up on reading the household examination records for all possible parishes? Take one parish at the time. Mrs. Brandt would be in one of those church records.

Kerstin started with Kvillinge parish where Augusta lived. Then she read through all the records in Norrköping’s Hedvig parish. I spent an evening reading through all the records for Norrköping’s Johannes parish. By this time, we had found no Mrs. Brandt. I next opened up Norrköping’s S:t Olai parish household examination records and realized that the population was so large that the records had to be published in 7 separate books covering 4 city quarters: Strand, Norra, Dal, and Berg. Each book could have up to 400 pages of scribbly and crossed-over handwriting by some old pastor.

I was not going to read through those books. There had to be a better approach.

I racked my brain – what other archives existed that allowed you to search on names?

This was a long shot, would a seamstress appear in a local newspaper? I guess only if she died and her death was of interest to the readers. Would anyone care about a seamstress dying?

I decided to search within the Swedish Royal Library’s archive of daily newspapers. I limited the search to the years 1835 – 1870 and to the local newspaper, Norrköpings Tidningar. The search word was Brandt.

The search resulted in a lot of hits – traveling merchants named Brandt, some famous Swedish actress named Mrs. Brandt, a run-away delinquent boy with the name of Brandt, to mention a few. I read the results in chronological order. When I got to 1869, I found a good candidate! She was listed under the heading of Death:

There was no more information. Just the single line with her name and age.

Back to the Church Records

With this information, I could now go straight into the chronological church records of Death and Burial. I just had to check every parish, but that was now a minor problem as I had a date and the records were chronological.

Sure enough, I found Catarina Brandt in Norrköping’s S:t Olai parish. The record affirmed what I had read in the paper. The only additional information was that she died of old age (66!!!), that her household examination record would be on page R22 in the household examination books, and that she actually died in Kvillinge parish and was buried there.

I of course checked the Death and Burial record for Kvillinge parish and found that she had been buried there. The only difference was the spelling of Katarina (K versus C) and that the cause of death was recorded as “weakness”.

The Register of the Rest

With the information that her household examination record would be on page R22, I would now be able to find her in S:t Olai’s records. Page 22. But in which quarter: Strand, Norra, Dal, or Berg?

I checked page 22 in every book and didn’t find her. Then I realized that other entries had a prefix of S, N, D, and B. I assumed, and then confirmed, that they referred to the quarter. But Mrs. Brandt’s record was supposed to be on page R22 and there was no quarter starting with R.

What could R mean? In Swedish, I imagined it could mean Resterande (remaining) or Resande (traveling). I looked at the list of church books, but no book seemed to match. Then there was a book called Böcker över obefintliga (Books of  Non-existent). On top of the first page was the title: “R=Restlängd (Rest Register). I flipped to page 22, and there she was.

According to the parish, Mrs. Brandt did not live within the parish anymore and didn’t attend S:t Olai’s church. But she had also not registered a move to any other parish. She was obviously traveling or staying with other people, or both. A likely traveling seamstress.

There was some additional information on this record. It stated that she was born in Ringarum parish on 11 December 1802 (I checked the parish birth records but didn’t find her on that date. However, the pastor had such horrendous handwriting that I could have missed it – see image). Her last household examination page was N197. And there was a note that she was a widow for the second time in 1833. 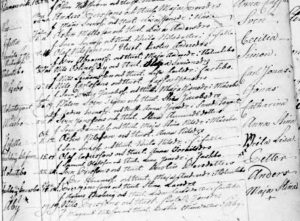 Aha! Maybe Mrs. Brandt’s husband’s death was also announced in the paper, just like hers. I was back in the newspaper archives again. This time I focused on 1833.  I included earlier years too, just in case there were other interesting hits.

The death was announced:

“That the master shoemaker, Clas Gustaf Brandt, through a terrible accident, died on Sunday, the 9th of June at the age of 33, tenderly mourned and missed by the surviving spouse and friends, is hereby reverently announced.”

And then there was an earlier announcement in the paper, in 1830, about a few houses that would be sold at auction. One was the house in which CG Brandt and his wife were living. As I now knew the year and the address, House No. 8 in Strand, in the block named Bakungnen, it was easy to find them in the household examination book. There they were, CG Brandt born 1800 and his wife Eva Catharina Hanqvist, born 1802. So now I had her maiden name too!

Finally, there were a few announcements in the newspaper by Mrs. Brandt. There she used Eva as her first name and C. as a middle initial. In May of 1833, she advertised flower seeds that she was selling on commission. And after her husband’s death, she wanted to settle his affairs and asked his former customers to get in touch with her.

And then the trail goes cold 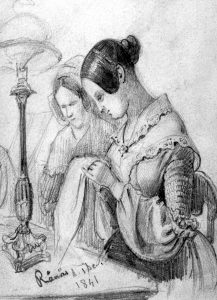 Sometime after her husband’s death, she must have realized that she had to support herself and that she had the skills to do it. That is when the trail goes cold. She eventually ends up in the Register of the Rest in the Books of Non-existent. But the fact that her death was announced in the paper, 36 years after her husband’s death, means that she was well known in the community.

So despite having only circumstantial evidence, I conclude that Augusta’s Mrs. Brandt was Eva Catharina Brandt. And the next time Kerstin and I visit Kvillinge cemetery, we will certainly look for her grave.

But today, I wanted to tell the story of this forgotten woman who made exquisite dresses for young girls’ first balls, sewed beautiful mantillas for brides, and filled bridal quilts with goose down – all hand stitched. And in between, she made shirts for men and altered old hand-me-down clothes.

One response to “Mrs. Brandt, the seamstress who left few threads to follow”