Thou Ancient, Thou Free

Thou Ancient, Thou Free

The paper, STOCKHOLMS FIGARO, of which the first issue hereby is presented to the public, will be published during the year 1845, every Sunday afternoon, and will be available these days between noon and 2 in the afternoon in Bonnier’s Bookstore at the Bazar, with the entrance on the side.

Well, I thought, what a cool coincident! This year, 1845, was the year when Augusta was a debutante and coming out into society, which meant going to balls, and attending concerts and the theatre. This brand new weekly magazine sold itself as an artistic and belletristic Sunday paper. It would have articles about art, literature, and theatre both in Sweden and abroad. Subscribers could also look forward to a monthly extra insert – a small poster of a famous singer or dancer or of the latest fashion. Or the insert could be musical notes for some new or popular piece of music that one could then learn to play on one’s pianoforte. 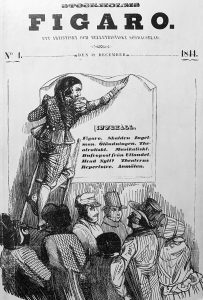 So where could I find copies of this weekly magazine? First I learned that the magazine was short-lived. It was only published in December of 1844 through the end of 1847. But that was perfect; Augusta’s late teenage years. Then I found out that the magazine was only available at Sweden’s Royal Library (Sweden’s library of congress). And you would have to order it and read it at the library.

This morning, I was at the library as soon as they had pulled the books from the archives. It was exciting to open the bound copies of the 175-year-old magazines.

But with a total of 3 years x 52 weeks x about 7 pages each, I would have to look at 1092 pages. That meant looking at, not reading. I decided to quickly scan for interesting topics and also to take pictures of the weekly column called “What’s New?” (Hvad Nytt?). It seemed to be a summary of literary, musical, and theatrical news in Stockholm.

The monthly inserts were also interesting. I can imagine young girls (and guys) framing the portraits of young beautiful actresses, dancers, and singers.  And then there were the music sheets. You could be the first one to learn the Tivoli Gallop or the aria from the opera The Black Domino! 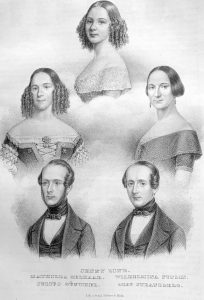 Poster of the top 5 singers in Stockholm in 1845

But there was also a piece of sheet music with the title of Swedish Folksong from Jemtland. The text started with “Thou ancient, thou free” (Swedish:  Du gamla, du fria). 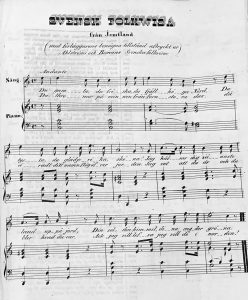 What? This is the beginning of the Swedish National Anthem!

I looked at the whole page and both the melody and the text were that of the Swedish National Anthem. Had I missed this in some history class – that our national anthem was actually a Swedish Folksong that got a new text in 1845?

When I got home, I did some research.

The national anthem was written by Richard Dybeck in 1844 to the music of a folk melody that he had heard in his home province and is actually considered to be a ballad from the middle ages. The song with Dybeck’s text was first performed in Stockholm at a soirée at Kirsteinska Huset in De la Croix Salon on the 13th of November 1844. The soirée was advertised by Richard Dybeck as an Evening Entertainment with Nordic Folk Music. It turned out to be a success. It was an almost sold-out performance and the King and the Queen were in attendance. Was Augusta also there? It is possible.

The song became popular, which is probably why it was included as an insert in the Stockholm Figaro a year later (16 November 1845).

Over the years, this song has just become the Swedish national anthem even though it has never formally been declared as such.

This topic was not what I thought I would learn about today, but sometimes research isn’t a straight road – it’s more like taking a scenic bypass.

One response to “Thou Ancient, Thou Free”