Dashing through the snow…

Dashing through the snow…

You can get to Stockholm’s international airport either by train or by car. Either way, you will pass Rosersberg, a small community northwest of Stockholm. If you are having a rental car, this is where you start looking for a gas station to fill up the car. If you are going by train, you just enjoy the beauty of the landscape. In the winter, there will be stretches of snowy fields, small farms in the distance, and dense evergreen forests. You could paint it for next year’s Christmas card. 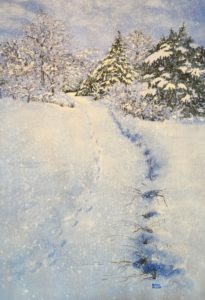 When the train stops at Rosersberg, some people will get off and maybe some will take the connecting bus 577. That is how you get to Skånela Church and Skånelaholm Castle. I have never taken the bus and never visited the places. But now it is on my list for next summer’s excursions!

I just can’t let go of an image of a teenage girl learning to shoot a pistol there and learning to drive a sleigh from Skånela Church to her home in central Stockholm. I can imagine her proudly driving the whole length of Drottninggatan, or Queen Street, in Stockholm. It must have been like a rite of passage – like getting your driver’s license and showing off by driving all the way up to your front door – and hoping your neighbors and friends are watching!

Thank you, my dear friend, for your long-awaited letter; you will not be angry with me for letting you wait a few mail days for an answer. I have been thinking of writing to you each mail day, but as you see, this has not happened. This Christmas has been the nicest one I can remember. First, we spent the Christmas holiday, or rather, the Christmas days as usual with our family. Then we traveled out to the countryside, to Pastor Schröderheim, where we spent 14 days – the most pleasant days you could ever imagine. We went to several balls at the neighbors, we went sledding, and in the evening, when we were at home, we sat in Uncle’s room and read aloud. I learned to shoot with a pistol and to drive a horse. On the way home I drove 10 miles* and then the whole length of Drottninggatan [Queen Street] all the way to our door. (Lotten’s letter to Augusta, Stockholm, February 9, 1847).”

Augusta’s friend, Lotten Westman, was a wealthy city-girl. She was born and raised in Stockholm. Lotten and her sister Clara lived with a foster mother after becoming orphans. But the sisters had many aunts and uncles in Stockholm and distant relatives in the countryside. Those were the families they visited during the holidays.

Pastor Göran Ulric Schröderheim was one of them. He had married his cousin, Anna Charlotta Westman, and both of them were also Lotten’s father’s cousins. Schröderheim had been a pastor at the Royal Court but was at this time pastor at Skånela Church north of Stockholm. He and his wife had two sons, Göran and Johan.

“The pastor’s wife is a very decent, but ordinary woman. The sons, the lieutenant and the student, are also decent, especially the latter who was my real favorite. He is the most cheerful and kindest man you can imagine. Because we had had such a happy and fun time there, the first days after my return were so quiet, and I especially missed my favorite.”

Lotten liked Johan who was a student in Uppsala. He would later marry his neighbor at Skånelaholm Castle, Hedvig Lovisa Juliana Jennings.  The same neighbors whose balls Lotten had attended.

Today, Skånela parsonage is listed as a B&B for conferences and Skånelaholm Castle is open to the public.

Let’s plan on an Augusta excursion to Skånela; imagining Lotten in a silk ballgown dancing in one of the castle’s halls, or dressed in a warm wool dress with layers of petticoats and shawls, practicing target shooting in the castle garden, or sledding down some slope – shawls flying! 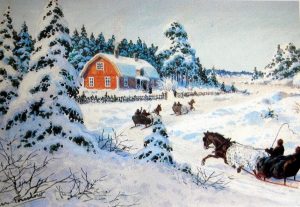