There are some entries in Augusta’s diary from 1847 that made an unforgettable impression on me as a teenager:

“At 5 o’clock in the morning, we started our walk in the loveliest surroundings up to Kuhstall, three hours from Schandau. Through a vaulted gateway, which nature itself has formed, one arrives on a terrace where the view is like the most inviting and, at the same time, wild painting”.

“Describing what we saw here would be in vain, and it would be an ungrateful effort to paint the landscapes with pencil and ink.” 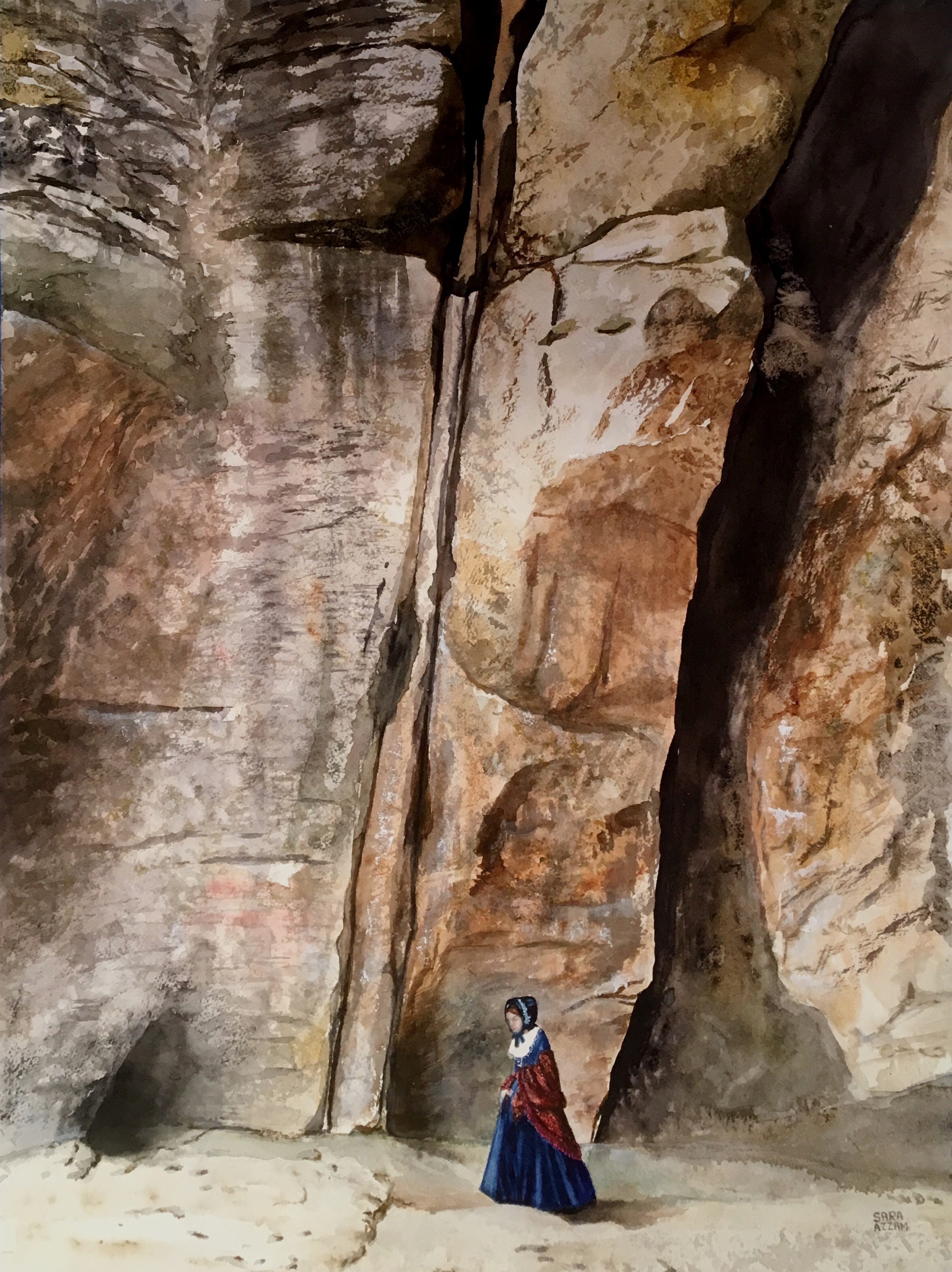 When I was a teenager, I wondered about this place and what it looked like. I dreamt about one day being able to go there. 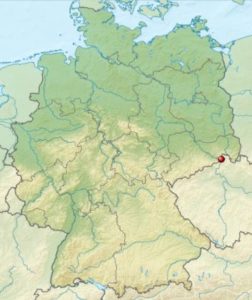 Bad Schandau is a small town on the shore of the river Elbe in eastern Germany, close to the border with the Czech Republic. It is also the gateway to the famous Saxon Switzerland National Park with its famous Elbe Sandstone Mountains. This area became famous in the late 1700s and early 1800s through the early landscape painters who were drawn to the rugged and dramatic mountains. The landscape was well suited for the European Romantic era.

Bad Schandau was also a popular spa town and many Swedes visited this area in the 1800s and described it in their diaries.

In 2017, my teenage dream came true. Kerstin and I had spent almost a year planning for a trip in Augusta’s footsteps and on a misty day in October, we were hiking up to Kuhstall. In my own diary from this day, I wrote:

“We are coming out of the dense forest and suddenly we see the huge opening in the cliff – the vaulted gateway. It feels like we have been inside a cave and see the sky through the cave’s opening. At this exact moment, the sun breaks through the clouds and through the opening, the light is blinding. All the mist in the valley below flow like heavy smoke on a theatre stage, as if on purpose to create extra drama.” 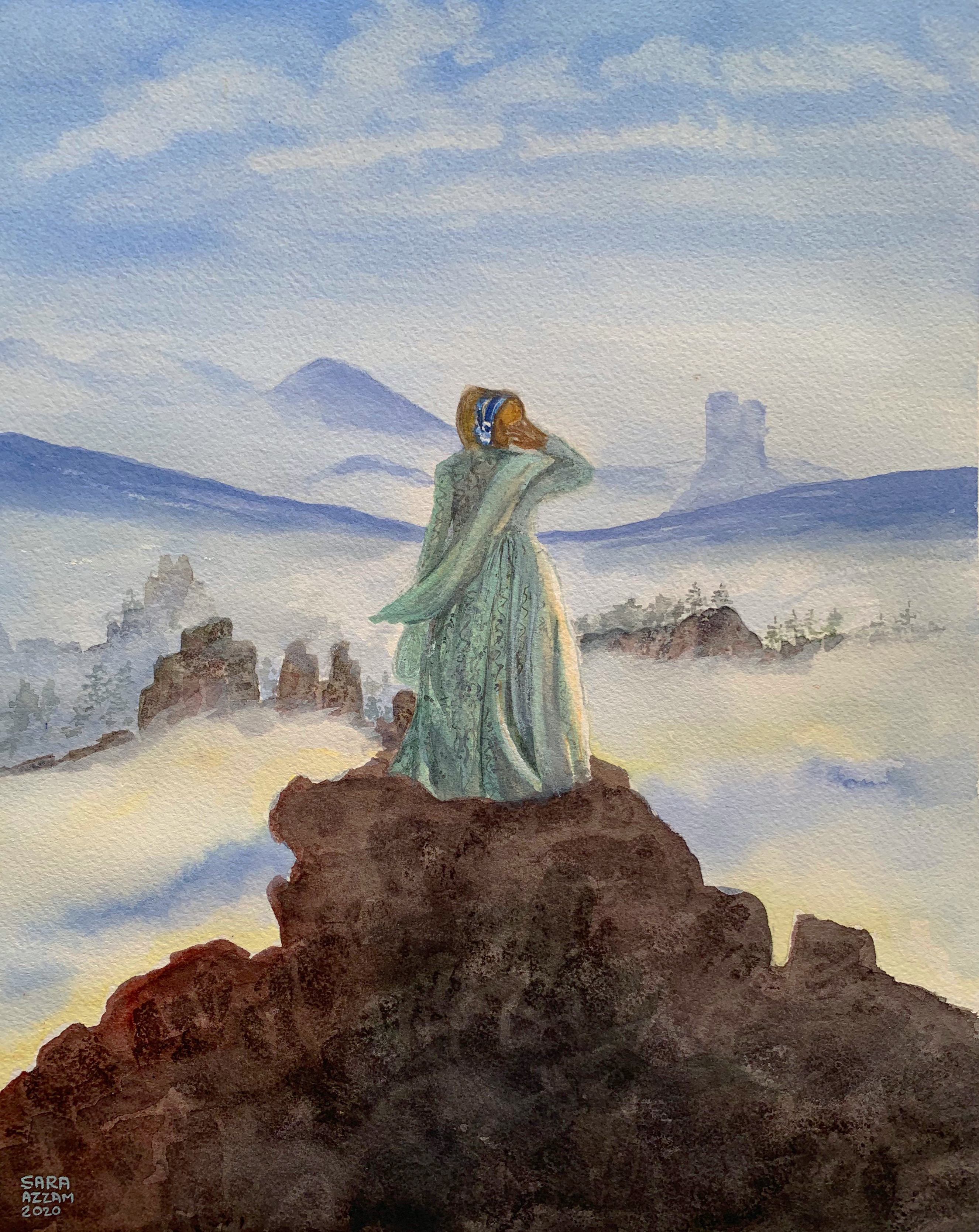 At Kuhstall, we realized that this site was just one of several stops on what is called die Malerweg (the Painter’s Trail), a historic route the landscape painters took when traveling from Dresden to Saxon Switzerland. Today it is a popular hiking trail.

Of course, Kerstin and I didn’t bring our art materials with us, but we took a lot of photos. And several of those are included in Kerstin’s beautiful book, Augustas resa.

Besides hiking the Malerweg, one can also take a steamer on the Elbe to get to some of the other stops where artists painted the landscape.

Two Swedish travelers wrote about their journey on the Elbe. They also tried to explain in words what an artist would have tried to paint.

“To paint a landscape with pen and ink is an ungrateful effort. Therefore, I am pleased to mention only Bastei, a 470 foot tall and 6 foot wide, over the Elbe protruding rock, from which on my journey back to Dresden I enjoyed the most divine view. From our view, the Elbe flows through fertile fields and meadows, while an array of hills and mountains are visible in the distance, and of which Königstein and Lilienstein tower over all the others.”

“A place we passed at the beginning of our trip was called Bastei and it is both the most beautiful and strangest sight. Here the cliffs are completely bizarre: they emerge in shapes that one cannot even imagine and which are unexplainable to the viewer, and above all this hang lush green trees.

No – now I finish my description: cliffs, mountains, hanging greenery, vineyards, fortress ruins, inviting towns, cozy villages, dark-blue high sky, and sunshine that could awaken the dead! Oh dear, what is all this on paper? – Words and only words, but in reality, it is heaven on earth! – Enough about this.” 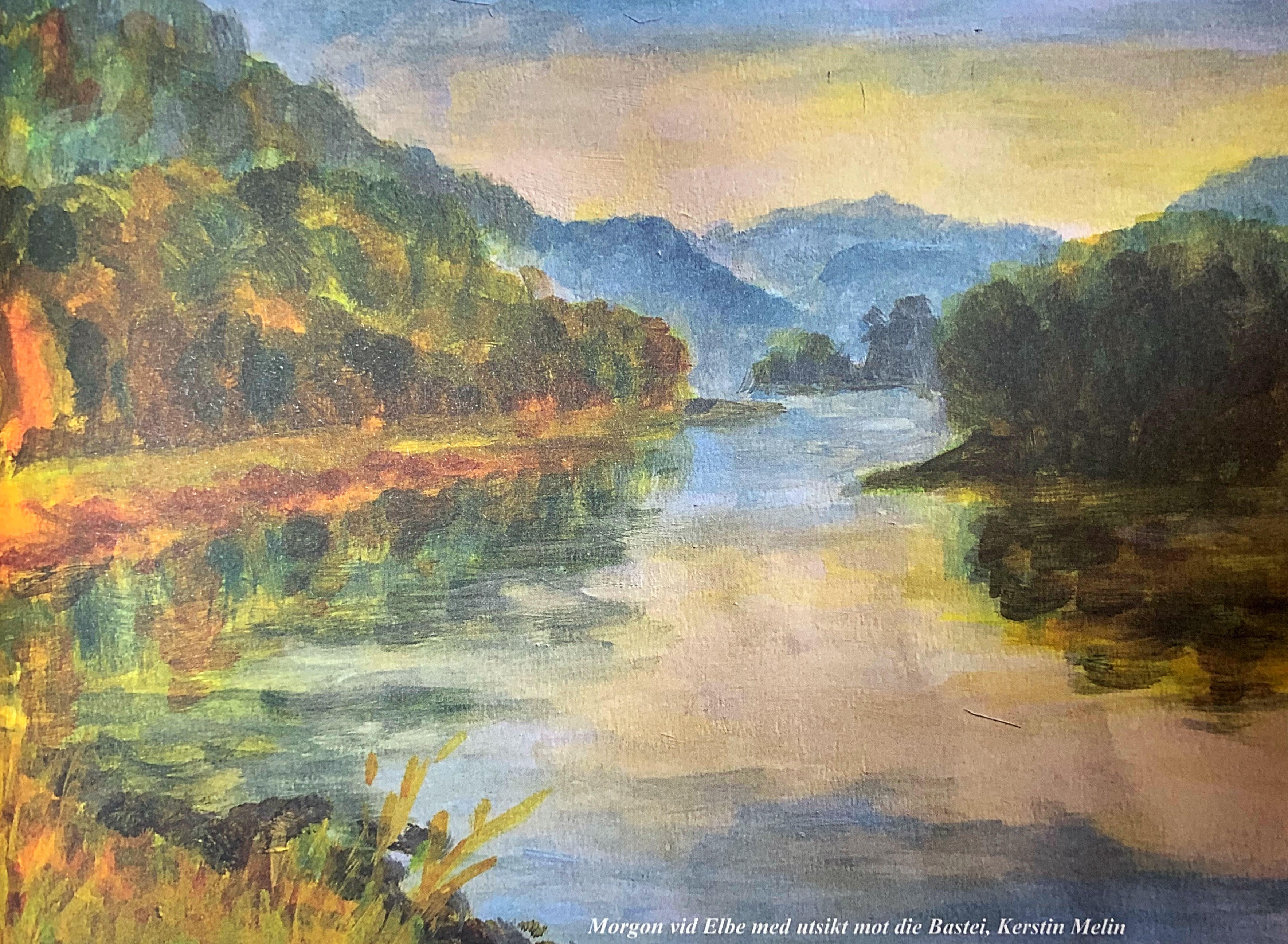 Morning on the Elbe – View towards the Bastei (Kerstin Melin, 2020)

Bastei Bridge is one of the most spectacular sites in the region. The bridge, which connects several sandstone formations, is visible from the river. It is also a hiking destination and the panoramic view from the bridge is breathtaking.

Augusta wrote the following in her diary in 1847:

“Now we started to walk higher and higher uphill until we found ourselves at the highest altitude of the Bastei. Here was an inn where we took some refreshments and then we were shown the way to the cliff where we got to see the famous view. And here I stood, mute with admiration and amazement; all the splendor I had seen before was nothing compared with this beautiful, living painting.

The whole rock juts out high above the Elbe. Straight ahead of me, I saw – deep under my feet – large forests, high mountains, towns, and villages as far away as the horizon, where the Bohemian mountains, appearing like tall foggy shapes, raised their heads towards the sky.

It is not even possible to describe the simplest view of Saxon Switzerland; everything is so magnificent, so beautiful, so incomprehensible that one does not think it is anything but the most pleasant, most enchanting dream.”

Kerstin and I were also stunned by the beautiful view from the Bastei and this is what I wrote in my diary:

“After many stops, to catch our breaths and take pictures, Kerstin and I have finally reached the first cliff that will give us a scenic view of the Elbe and beyond. The panoramic view is stunning. In the far distance, a small paddle steamer is making its way down the Elbe.

Kerstin and I walk up the next flight of stairs, carved out of the rock, and there it is – the famous bridge! It is a little dizzying to walk across the bridge. Once across, the path continues to a viewing platform on the right. This is even more dizzying! But what a view! This is the view depicted in all old oil paintings and etchings. This one I have to paint – in a large scale!” 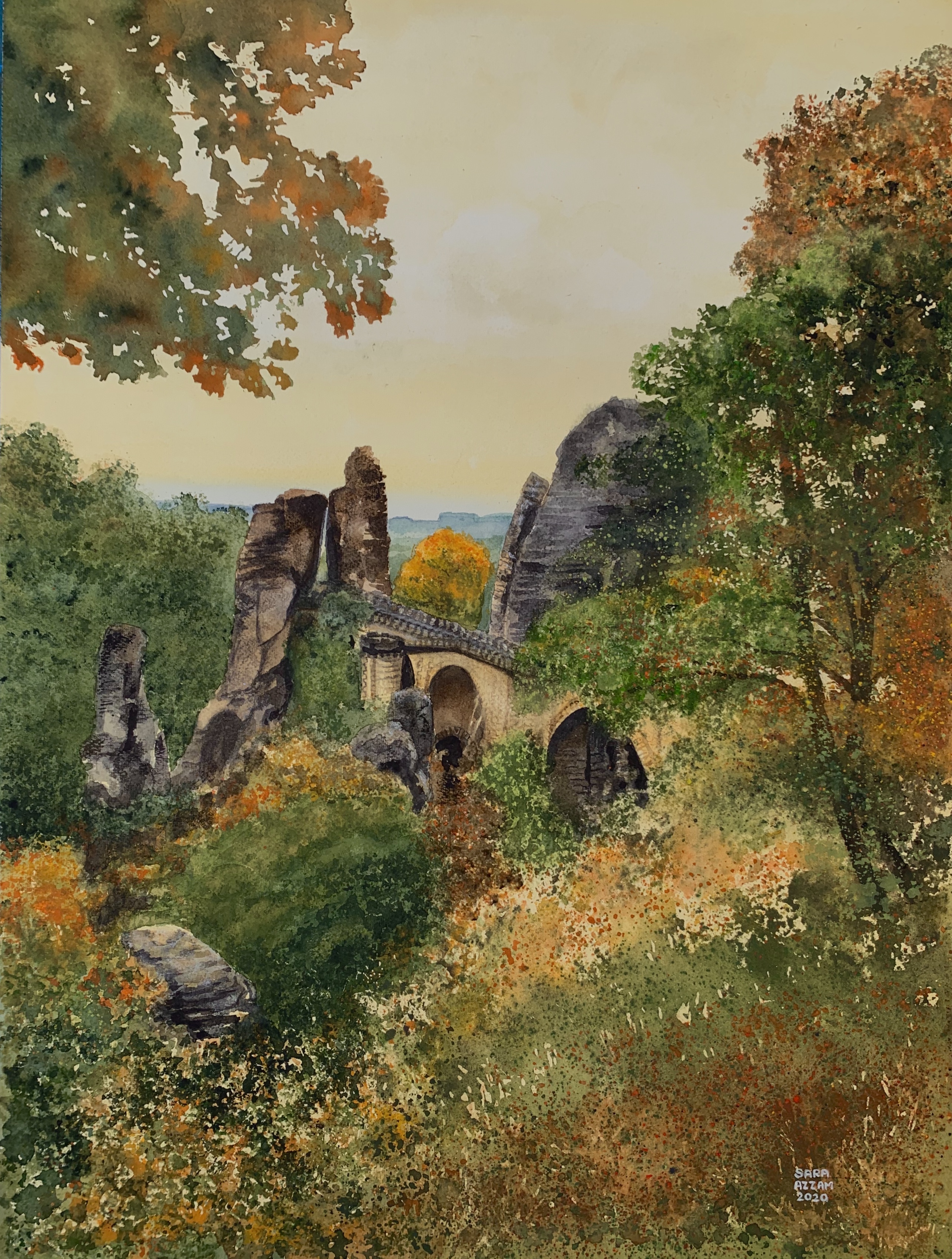 Now, three years later, I have finally had time to paint some of the sites from the Malerweg. It brings back wonderful memories of our journey. And I hope I will someday be able to be back in Saxon Switzerland.

Some famous paintings from the Malerweg 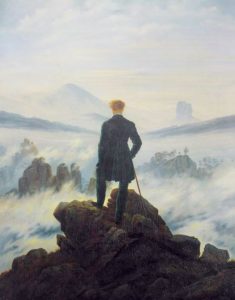 Wanderer above the sea of fog (Caspar David Friedrich, 1818). 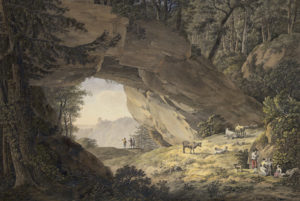 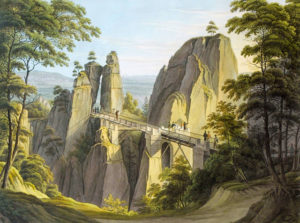 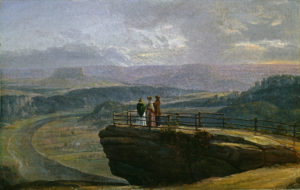