It is a beautiful, late-summer Sunday. The Wester family at Loddby has attended church and listened to Pastor Mobeck’s sermon about the importance of rest and of keeping the Sabbath. Now they are back at Loddby and that is what they are doing. At least the women, resting. The three young men have decided to go fishing. The matriarch, widow, and owner of Loddby, Carolina Wester, and her daughter Caroline are sitting in the sunny parlor downstairs.

Sofia Ulrich is upstairs with the younger girls: Ulla, Ida, and Lotten Wester. They are sitting by the window, talking. Through the trees, they can see the sun glitter on the bay and the small rowboat in the distance. Sofia can’t tell if it is Berndt or Carl or Markus who is rowing. They are too far out on the bay. Suddenly there seems to be some commotion in the boat – is someone standing up? Then things happen fast. For a split second, it looks like the boat is listing, and then, with horror, she realizes that the boat is capsizing. 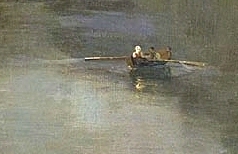 “Today, we received very sad news, that little Markus Wester has drowned at his mother’s Loddby and that both Berndt Forsgrén and Ulla’s fiancé Hülphers almost drowned as well. Poor Tante Wester who has just lost a beloved son in such a horrible way, and poor Caroline! Imagine losing one’s brother and fear for one’s husband’s life, especially as she is still ill, for it has not even been two weeks since she gave birth at Loddby to a baby who died the following day, and such a more heartfelt loss as they have been married for 3 years without being able to have any children, something they really wanted.

Poor Ulla, who lost a brother and was close to have her fiancé perish. She was with her sisters, Ida and Lotten, and my aunt Sofia upstairs and saw from the windows the little rowing boat capsize. They hurried down and sent a boat to the rescue, but the distressed men were several hundred meters from the shore. Berndt was about to take his last breath when the boat reached them. Young Hülphers, who was swimming towards the shore carrying Markus on his back, was completely exhausted and when the help reached him, Markus was already dead in his arms. Because of all the water he had swallowed and the horror he had experienced, he had passed out and died.”

Lotten Ulrich (1806-1887) and Edla Ulrich (1816-1897) lived at the Royal Palace in Stockholm where their father, Johan Christian Henrik Ulrich, was the secretary to King Carl XIV Johan. The two sisters’ diaries were published in  Systrarnas Ulrichs dagböcker by Margareta Östman. When the king died in 1844, the family had to move to Norrköping (close to Loddby) and Augusta’s best friend in Stockholm, Lotten Westman, encouraged Augusta to get acquainted with the two sisters.

Who was Lotten Ulrich’s aunt Sofia Ulrich? She was indeed one of Lotten Ulrich’s father’s sisters (there were 9 children in the family). Sofia was born in Norrköping and in 1831, at the age of 33, she was living with the Ulrich family at Loddby. How was she acquainted with the Wester family? We don’t know.

The matriarch, widow, and owner of Loddby, Carolina Wester, was born Heitmüller. In 1807, she married the 34-year-old widow, Markus Wester (1773-1820), who owned the ironworks at Molnebo. Together, they had 8 children. 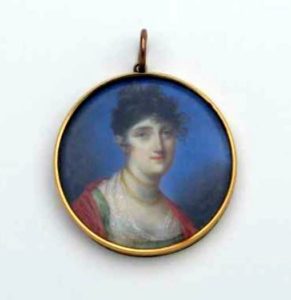 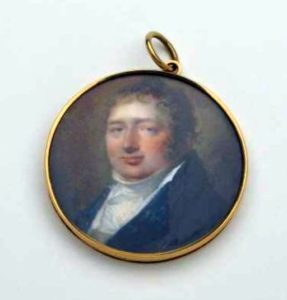 Kristina Hedda Karolina ”Caroline” was the oldest daughter in the family. In 1829, she married Berndt Gustaf Forsgrén (1799-1888) who was a silk and clothing merchant in Stockholm. His store was located at the excellent address of Stortorget 1 in the Old Town, right across from the bourse. In the summer of 1831, Caroline must have stayed with her mother at Loddby for the birth of her first child. And now she had lost both her baby and her brother. It could have been even worse. She could have lost her husband too in the boating accident.

So how did life turn out for Caroline and Berndt? According to the census records in Stockholm, the couple had 9 children and, in 1845, the family lived at Stora Nygatan 22. Berndt Forsgrén was very successful and became extremely wealthy. One of their daughters, Carolina Elisabet, married Erik Swartz (b. 1817), and their son, Carl Swartz, became Sweden’s prime minister in 1917.

Interestingly, the daughters of the two sisters, Caroline and Ulla Wester, married the two brothers Swartz (Erik and Johan).

Aronina Arvida Gabriella ”Ida” married Frans Adam Björling (1801-1869) in 1842. It was his second marriage. Ida did not have any children but she was a stepmother to her husband’s son, Carl August Theodor. The family owned and lived at Slagsta, an estate south of Stockholm.

Markusina Charlotta ”Lotten”, the youngest daughter in the family, had a short life. She did not marry and died in Norrköping at the age of 22 from dysentery (Swedish: rödsot).

The image of the 3 men in a rowboat is from a larger painting by Josefina Holmlund (b. 1827):