It was early fall when Christina Mathilda Georgina af Trolle suspected that she was pregnant. She was 19 years old and unmarried. What would she do? To have a child out of wedlock was in 1848 actually a crime, although few mothers were prosecuted. But worse was the shame.

She had three choices. She could tell the baby’s father, bookkeeper Lars Johan Lindqvist, and if he agreed, they could get married as soon as possible. Or she could leave Stockholm and give birth somewhere else and give up the child. Both options meant that she had to tell her parents, and she didn’t know how she would be able to face them. Her father was an army officer and her family belonged to the aristocracy. That was the reason that Pastor Petterson had ranked her has girl number 8 of the 92 girls who got confirmed in St Jacob’s church in May of 1844. Having a child out of wedlock would definitely be a family scandal.

Or she could have an abortion. Then she wouldn’t have to tell anyone and nobody would ever know. But having an abortion scared her. It could go wrong, and she could die. And, abortions were illegal and punishable by death. But how would anyone find out? On the other hand, giving birth was also dangerous.

In the end, she decided to face her parents and Lars Johan. Getting married was her best option.

But maybe that was not the story at all. Maybe she was in love and excited about being pregnant. Without diaries or letters, one can only speculate. The outcome was in any way the same. Georgina would get married and have her baby. 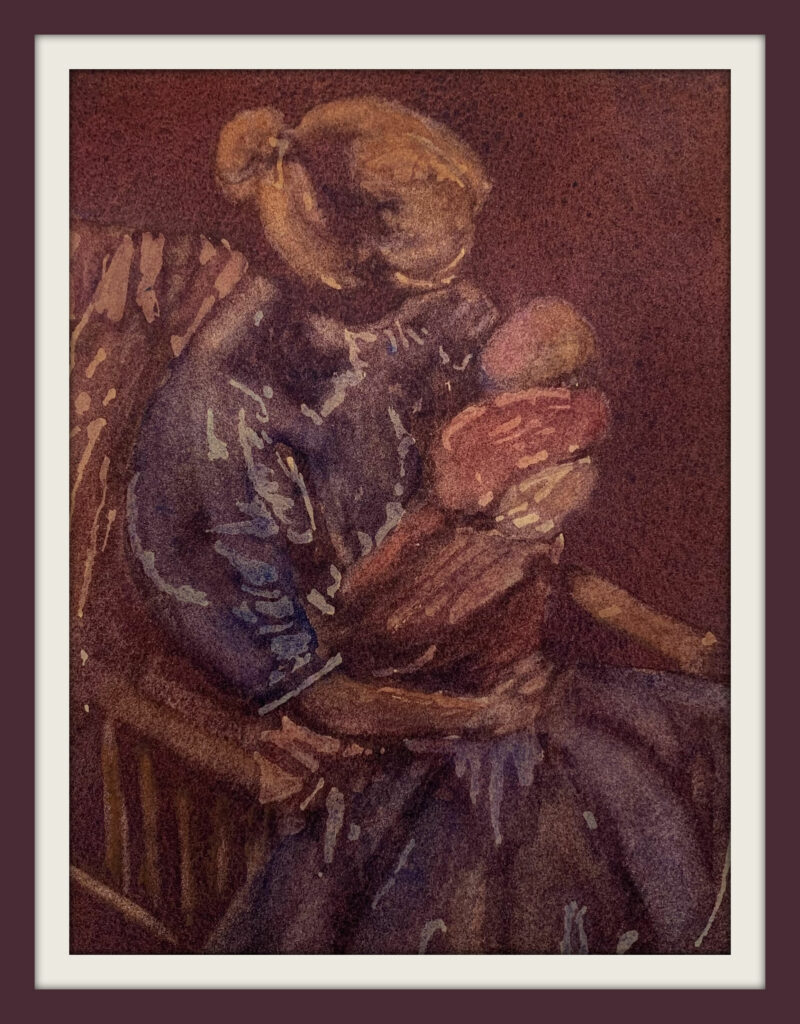 My watercolor of a mother and child (inspired by a sculpture by Bessie Potter Vonnoh, called The Young Mother, 1896)

Christina Mathilda Georgina was born in Stockholm on January 21, 1829. Her father was Carl Georg af Trolle, born in 1791, and a captain in Svea Artillery Regiment. He retired the year before Georgina was born. Her mother was Eva Christina Magdelo, born in 1810. Georgina had 9 siblings, but 4 died at an early age. In 1844, when Georgina was confirmed, the family consisted of 2 older half-brothers, a 9-year-old brother, and 2 sisters, 5 and 1 years old.  In 1846, her father bought Lännersta, a farm in Boo parish on an island east of Stockholm. The family moved from the city out to the country.

So how did Georgina’s life turn out? Sometimes, the easiest way is to start from the end. That is, to search for an obituary in the digitized newspapers. The obituary would list the grieving family members and where the family lived. With this information, the next step would be to dive into the church records.

The church records would include wedding dates and birth dates of children. In Georgina’s case, her first child was born 5 months after her wedding. So what happened and who did she marry?

Lars Johan Lindqvist was born on January 9, 1816, in Fägre parish close to Göta Canal and Lake Viken. His father was a bricklayer. On June 1, 1837, at the age of 22, he married the 26-year-old Margareta Björkqvist in Nyköping. He now had the title of materials manager (Swedish: materialsförvaltare). On June 4, 1839, they had a son, Ernst Johan Lindqvist. And in 1846, Margareta died and Lars Johan and his son moved to Gustavsberg, a small community in Värmdö parish outside Stockholm.

In 1825, the owners of Gustavsberg had started a porcelain factory which is still in operation. Lars Johan now had the title of bookkeeper at Gustavsberg. In the church records, he was listed as a widower and living with his 7-year old son. 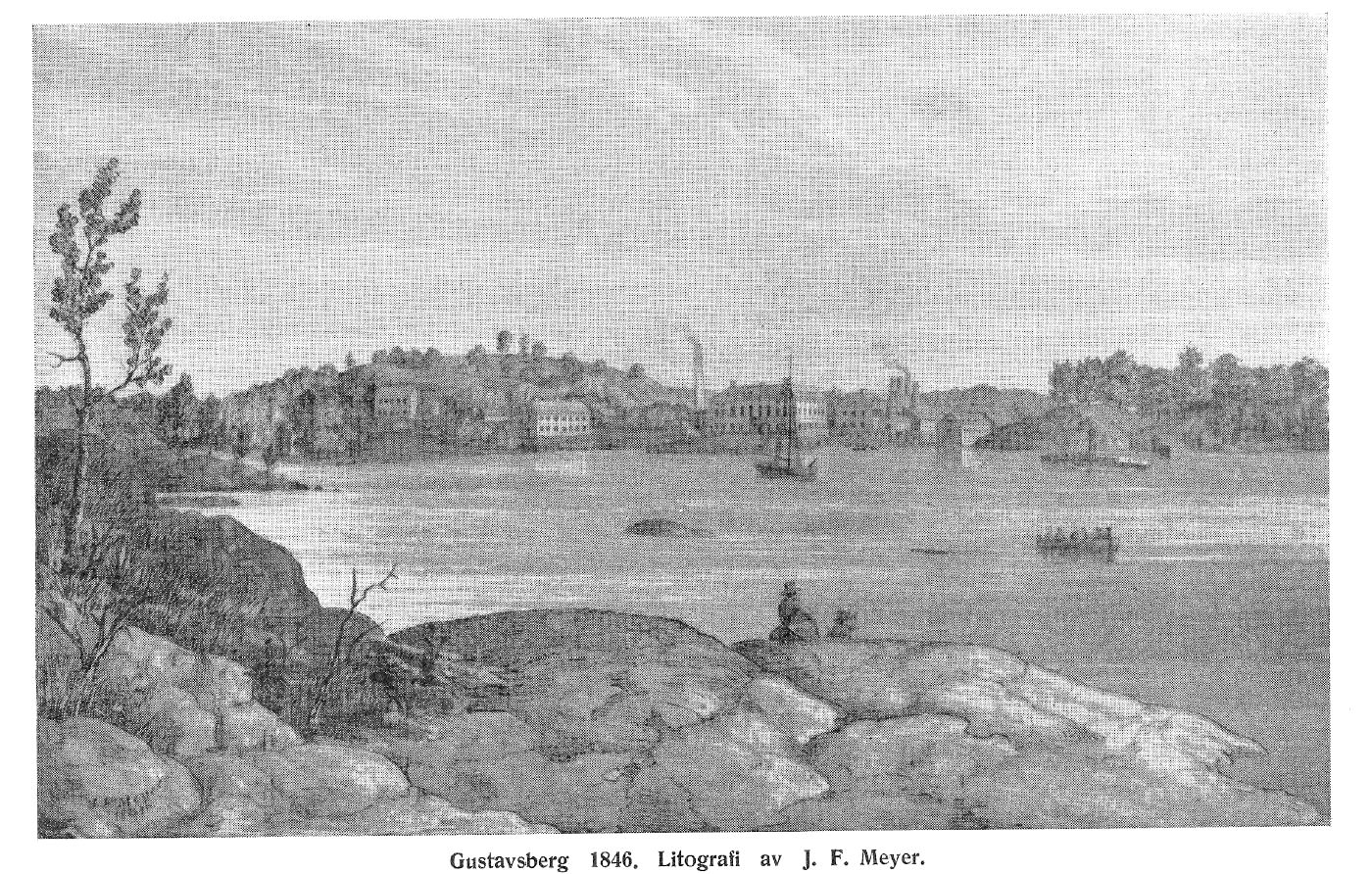 How did Georgina, belonging to the upper class – affluent and aristocratic – meet Lars Johan, the son of a bricklayer? He was also a widower with a young son and was 13 years older than Georgina.

Georgina and Lars Johan both lived in the countryside east of Stockholm, in neighboring parishes but by no means close to each other. Without any saved diaries or letters, we would never know how they met or the circumstances that lead to them getting married, except for the fact that Georgina had gotten pregnant.

In 1852, the small family moved to Örebro where Lars Johan had been hired as an accountant (Swedish: kamrer) for the newly formed Royal Swedish Company for the Railroad Örebro-Hult. The Örebro-Hult Railroad was to be Sweden’s first railroad where trains were pulled by locomotives. 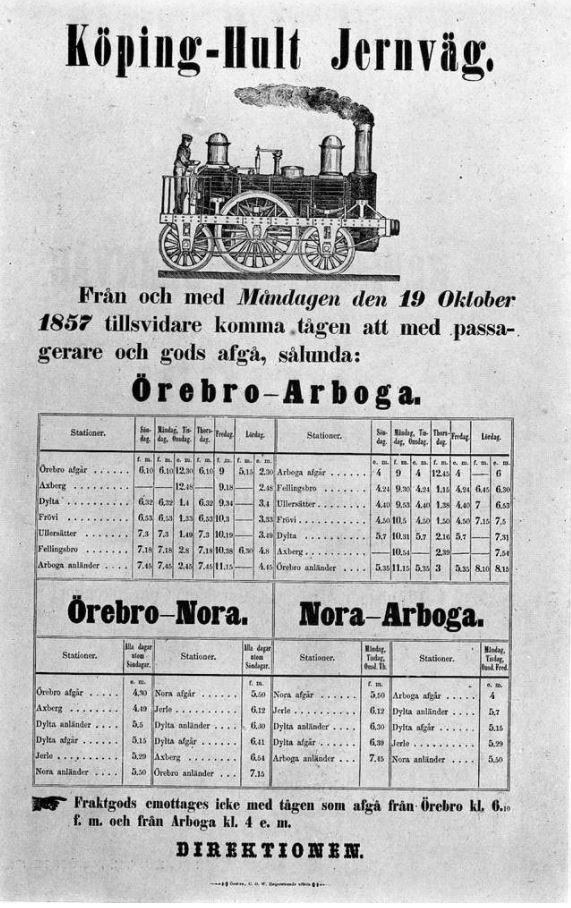 Timetable for the Köping-Hult Railroad in 1857

Two years later, in May of 1858, Georgina’s obituary appeared in the paper. It stated that she had died at an age of 29 after a long, consuming illness. Although the church records did not state the cause of death, one can assume that she died from tuberculosis like so many other young women. The obituary also listed the family members as her husband, 3 daughters, a stepson, parents, and siblings.

What happened to children?

All three daughters stayed in Örebro and married.

Agnes Johanna Georgina married her 14-year-older neighbor, Oscar Alfort in 1872.  They had no children. Agnes died in 1919.

Lovisa Anna Maria (Louise) married the postmaster Fredrik Oskar Klemens Lindh in 1882. He had a daughter, Helfrid, born in 1879.

Jenny Mathilda Augusta married Johan Otto Mauritz Serrander in 1874. They had 8 children. Jenny died in 1940. At the link above, and then scrolling to the top, there is a large family photo of Jenny and Johan getting married. They are the couple sitting in the middle of the photograph.