Pastor Josef Nordlund looked across his desk at Emma Wiiger, the young mother who had come to see him. Emma was visibly upset and his role was to dissuade her from taking action against her husband. Why would a young woman like her, with three young children, even think about leaving her husband? Divorce! He had to convince her to, instead, be a better wife and mother.

“Listen,” he told Emma, “I would like to read something to you to make you understand that it is you, and only you, who can make your marriage work.”

Emma was quiet. She knew what was coming.

Pastor Nordlund picked up the bible on his desk and quickly found Peter 1:3.

“Likewise, ye wives, be in subjection to your own husbands; that, if any obey not the word, they also may without the word be won by the conversation of the wives.

“What Peter teaches us,” he continued, “is that it is women’s calling to step back and avoid confrontations. God’s word and nature direct you to different means of victory.  You will win by quietly rectify what has gone wrong, to faithfully guard against your own temperament, to interpret your husband’s actions in a positive light.”  He quickly added, “Of course, if this is difficult to do, then forgive rather than condemn.”

Emma was still quiet. Nothing that Pastor Nordlund was saying would make her change her mind. What did he know about her and her husband’s relationship? Nothing!

Pastor Nordlund was not quite done. He also wanted to give her hope.

“It is God’s will that you should be submissive. Put your quiet hope to God. Will you promise me that?”

Emma was walking home from her visit with Pastor Nordlund. He was a very nice and well-meaning pastor but probably didn’t know that all marriages were not as happy as his. And she knew that her decision would bring hardship. But she also knew she had to go through with the divorce. It would be best for everyone, including the children. And they were still so young, they would do fine.

Maria Magdalena church, where Pastor Nordlund had his office, was only a short walk from her home at Lilla Bastugatan 6. When she first met her husband, she was very impressed with his apartment and during the first years of their marriage, she thought about how fortunate she was to be living there.

Now, it was with heavy steps that she walked home. She had to tell her husband that she had visited Pastor Nordlund about getting a divorce. She had set her plan in motion.

For each girl who got confirmed in St Jacob Parish in May of 1844, there is an entry: her name, birth date, parish (if she lived in another parish than St Jacob), and the title of her father. The order that the pastor listed the girls was based on the girl’s father’s status in society. Emma was ranked as number 18. She belonged to Hedvig Eleonora Parish and her father was a “Prot. Secreterare”.

Who was Emma and what happened to her?

How do you search?

I start with the digitized census records for 1835 and find the following. Emma Olivia Wilhelmina Wiiger was born in Stockholm on April 8, 1828. Her father, Ole Peder Wiiger (b. 1792) was Norwegian but worked in Stockholm as the Royal Secretary for Norwegian affairs. Her mother was Maria Fredrica Wilhelmina Nybohm (b. 1803).

Her father died (in 1837 or 1838) when Emma was around 10 years old and her mother remarried a Danish bookkeeper named Johan Albrecht Fredrik Wullff (b. 1809).

The next step is to search in digitized newspapers. Here I find a wedding announcement. On December 29, 1846, Emil Adolf Theodor Kihlberg married Emma Olivia Wilhelmina Wiiger.

So who was Theodor Kihlberg? He is easy to find because he became a postmaster and his bio was included in a book about Swedish postmasters. The interesting thing was that he took over the position from our great-great-grandmother Augusta’s daughter’s father-in-law, Johan Samuel Svinhufvud.

So Emma had died? Between the birth of her son in 1848 and her husband’s marriage in 1856? There is no obituary in the papers and no record of an estate inventory (these are sometimes digitized). How could I find out when she died? I decide to spend a couple of hours reading all the death records for the parish I assume she had lived in (Maria Magdalena) for the years 1848-1856. That’s is tedious work! Visually scanning all the handwritten entries for a name.

When I get to the fall of 1853, I realize that there were several members of each family who had died. The column for the cause of death is shocking – at the top of the page is written “cholera” and then an abbreviation for “ditto” for the rest of the entries on the page. And this continues page after page. It was the cholera epidemic of 1853!

But Emma didn’t die of cholera and didn’t die at all during these years, at least not in this parish.

I just don’t want to give up. How else could I find what happened to her? If I knew her exact address, I could then go into the parish’s house examination records. This is where the pastor, after making a yearly visit to each and all his parishioners, would write down how well they could read and understand the bible as well as other notes about them (and if they had had or been vaccinated against smallpox).

What if she actually moved in with her husband when she got married? I decide to look at his census record for 1845. He lived in south Stockholm, close to Slussen, in a block called Lappskon Större #6. Now I can look up the address in the Maria Magdalena Parish’s House Examination Records for 1845. 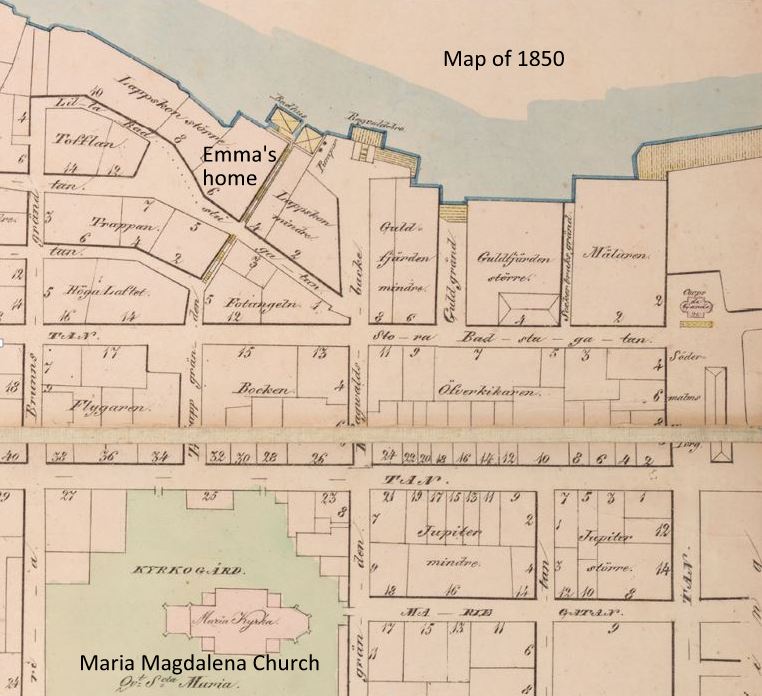 And there he is!

I then check each additional year. I find Emma moving in. Then on February 6, 1848, they have a son, Robert Theodor. That matches the information I had found in the book about Swedish postmasters. But then there are more children. On April 1, 1849, they have a daughter, Alfhild Emma. And on September 22, 1851, another daughter, Hilda Louisa.

Then comes the bombshell! Emma didn’t die. Theodor was not a widower when he remarried. Emma and Theodor had divorced!

Divorce was uncommon in the mid-1800s. The most common reasons in the early 1800s were infidelity and abandonment. Abandonment was characterized by one of the spouses leaving Sweden with the aim of not returning. In 1810, the law had changed to include as a reason for divorce “wastefulness, drunkenness, and a violent temper, and when such a strife in the mood and mindset of both spouses, which manifested itself in perpetual outbursts, finally turned into disgust and hatred.” 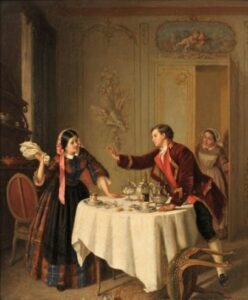 Divorce proceedings started with the couple meeting with the pastor in their parish. The pastor and the church council were to counsel the couple and convince them to not go through with the divorce. If this failed, the case would be heard in court. Once the divorce was approved, the couple would apply for proof of divorce, a so-called divorce deed.

The details of Emma’s and Theodor’s divorce was noted in the parish household examination records under the columns of marriage and permits. It is hard to decipher the handwritten notes. In the column of marriage, it seems like the divorce was granted on the 4th of May, 1852. There is also an earlier date listed as 14th or 18th of April, 1852.

Under the column of permits etc., the text is as follows:

For disagreement reported at the wife’s request and after previous fruitless warnings at the Stockholm City Consistory, 14 March 1851.

And there is one more column. There, the pastor has written:

So Emma moved out a year after their divorce, on 15 April 1853, and would now live in the parish of Storkyrkoförsamlingen. Now I go to this parish and look at the record of new parishioners in 1853. And there she is. The church kept great records of the citizens of Sweden. Emma is listed with the comment “divorced wife”. This “title” will follow her for the rest of her life. Her sister also moves into this parish. Their mother, stepfather, and their siblings already lived in this parish and it is possible that Emma and her sister moved in with them.

One more person moved with Emma: her 1 ½-year-old daughter, Hilda.

Did Theodor get custody of the other two children, Robert and Alfhild? In the census records for 1855, they are listed as living with him. Six-year-old Alfhild dies on August 5, 1855. And soon after, Theodor moves to Gothenburg. Did he take Robert with him? Eight months later, he has remarried and in Gothenburg’s church records, he is listed as a widower. Is that what he reported or did the pastor decide that it sounded better than a divorced husband?

Emma, her Children, and her Mother

So what happened to Emma? She moved to Tavastgatan 11, a few blocks from where she had lived with her husband. She did not remarry. On June 4, 1863, she died from pneumonia at an age of 35.

Her son Robert did well. He studied theology at the university in Uppsala and became a pastor in Söderhamn. He married and had two children, Leif Teodor Kihlberg, Ph.D., and Liv Karin Maria Duplessis-Kergomard.

Hilda married Carl Otterström. They had one daughter, Emma Gustafva Otterström, born on January 27, 1879. Hilda died 24 days later, at an age of 28. The daughter, Emma Gustafva, married Anders Theodor Chrysander. She contracted typhoid while pregnant and both she and her prematurely born daughter Ingrid died on January 29, 1899. She was 20 years old.

And Emma’s mother, Wilhelmina, survived two husbands and some of her children and grandchildren. She was born in 1803 and died in 1890.

This genre painting is about going home or staying. It could depict Emma and her children after the divorce. The young mother in the green bonnet is moving out and taking the youngest daughter with her while the older daughter is staying. The maid is helping the little girl with her cape. 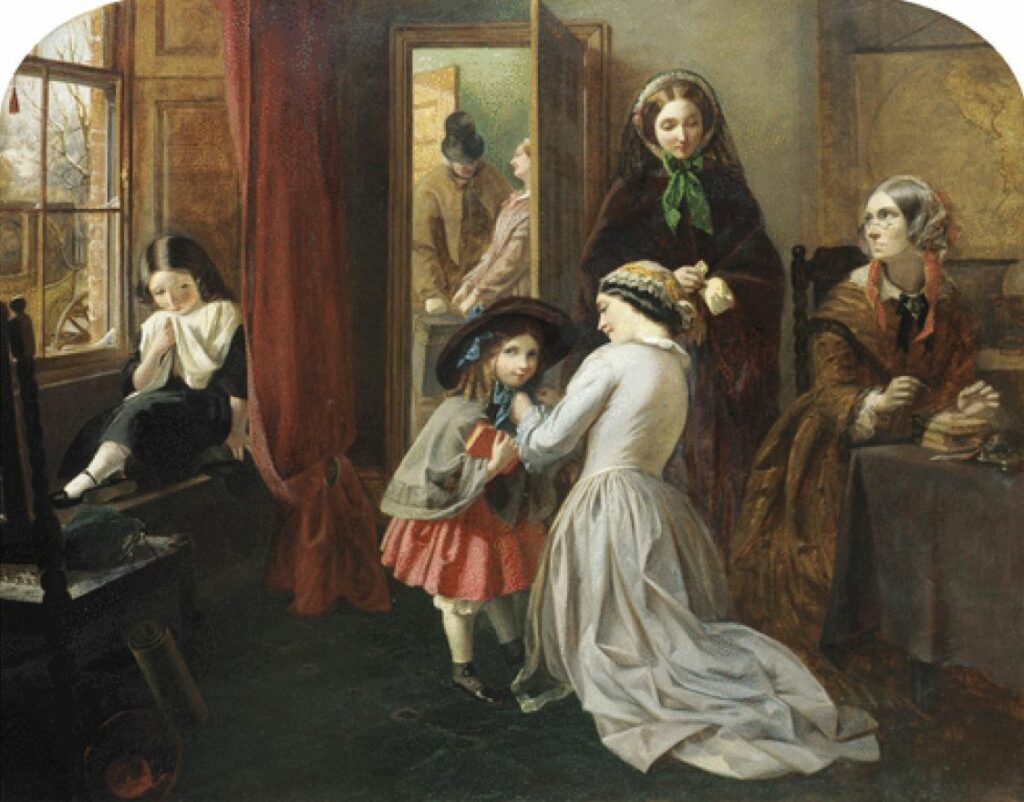 One response to “18. Emma Olivia Wilhelmina Wiiger and an Unwanted Husband”