Therese Gustafva Aspegrén was ranked as girl number 16 out of the 92 girls in our Augusta’s confirmation class. Like so many of the other girls in her class, she had a father who was a wholesale merchant.

In 1833, the family had moved from Katarina parish to the more desirable address in Old Town – Västerlånggatan 78. And that is where they lived when Therese’s little brother, Henric, was born.

The following year, Therese’s and her siblings’ lives would be changed forever. 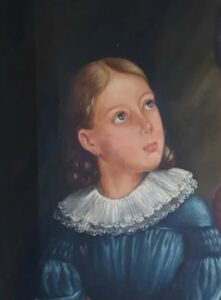 The Cholera Epidemic of 1834

On August 25, 1834, Stockholm officially declared a cholera outbreak. It would last until the 12th of October. During these 49 days, the official number of cholera cases was 7,895 and 3,277 persons died. In 1834, nobody knew what caused cholera and doctors had limited means of treating patients.

I found a Swedish text, published in 1882, where the authors described a typical day in the life of a middle-class family in Stockholm during the 1834 epidemic. The following is based on some of the text. The full text (in Swedish) can be found at the following link: http://runeberg.org/gsthlm/0204.html

A Typical Day During the 1834 Epidemic

The father of the family and his wife had, as usual, risen early. A few drops, which were supposed to be useful against infection, were taken before the coffee. Although the plague raged, the daily chores had to be carried out. The maid came from the bakery and had a lot to tell the family. She had stood outside the baker’s window for a long time and talked to the madam inside and with the other women outside. The most horrible stories had been told.

A woman had said that in the hospitals those who were taken there were just disposed of. And that the wells were poisoned. That was nothing new. “You see, the rich want to get rid of the poor!”

A cholera-stricken worker from Söder had been taken to the hospital. His dog had followed. Once the patient was in bed, and the nurse was going to give him some medicine, she spilled a few drops on the floor. The dog licked up the drops and died immediately. “That should tell you what kind of medicine it was!”

And a madam from Ladugårdslandet had also been taken to a hospital. A large hole was burned in her scarf from a few drops that fell next to her when she was about to take the medicine. Sure, cholera could be dangerous, but it would still be more dangerous to go to a hospital.

That was the opinion of most people. The stories that circulated grew in numbers and became ever more horrific.

While the children were washed and dressed and told to behave, they listened to the grownup’s stories. They were also told that naughty children would immediately get cholera. But of course, the parents worried about their children. They tied copper plates on each child’s chest to protect against infection. No coppersmith had ever contracted cholera and, therefore, anyone could protect him or herself with such a plate, which was either round or square or triangular with rounded corners, but which would always cover the chest and which hung there and verdigrised to little health benefit until a new type was found – finely polished plates that did not cause any inconvenience. Instead of the plates, or together with them, amulets or silk bags with camphor were also used. 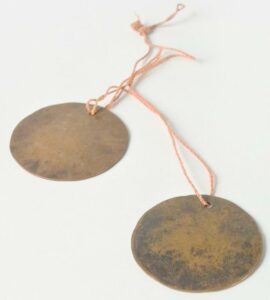 Cholera Amulets from 1834. Used to protect children from cholera.

Stomach belts were also common, even for children. The best one was, it was said, the so-called Polish belts, with “the same kind of lining that the Polish army used during the war.” They were sold by hatmaker Brandelius at Gustaf Adolf’s Square.

When the children were fully equipped, they were given a glass of tar-water to drink, and a piece of Calamus root was put in their mouths. It was supposed to be very beneficial and was given to them since they didn’t want to chew garlic (which would have been even more beneficial). They were not allowed to go out and play, because they could easily expose themselves to infection. Besides, a child in the “city” does not have many playgrounds; they often have to stay indoors. More severe was the ban on eating fruits. It was known that at Munkbron, the most delicious plums were sold, but not a single one was brought home by the mother.

The father, who had gone to work early, had already returned from his work and looked worried. Now he had to check how many had fallen ill and died during the last 24 hours. He would find it in the newspaper, Dagbladet. The father, who had taken another teaspoon of double-strength Wormwood drops and felt a pleasant warmth in his stomach, read aloud.

Every morning Dagbladet was read, and in the evening Aftonbladet was consulted. At the beginning of September the number of the sick rose to over 200 a day, 100 died, and 400 remained ill!

“How will this end?” people asked, as they looked around with concern. If you looked through the window, you noticed one stretcher after another being carried past. Those out walking backed up against the walls of the houses in the narrow street. They feared infection from the carriers of the sick, they covered their mouths and noses and turned their heads away. And yet people had to continue with their daily activities.

There were endless disputes about the origin and spread of cholera, if it was contagious or not, how it would be cured, etc. Everyone thought they understood the matter. One said that one should eat only vegetables to avoid cholera. Another claimed that meat was the best. One said he had heard from Söderköping that Dr. Lagberg advocated blood-letting, dozens of leeches on the head, piles of leeches on other parts of the body. The storyteller was suddenly interrupted by a heartbreaking scream from an upper floor. It was someone with cholera writhing in unbearable cramps.

The group who had shared rumors, hastily dispersed. Even those who said they did not believe the cholera was contagious, were suddenly in a great hurry to leave this dangerous neighborhood. After a few hours, the person upstairs with the horrible cramps was just a corpse. The other floors of the house were smoked. One used smoke balls, smoke cards (bought from Benjamin Leja and smelled quite good), raw coffee beans, or smoke men that were for sale in Tjäder’s tobacco shop at Brunkeberg. In the cramped yard stood a pot of tar that smoked the whole house. The air was saturated with the stench of the gutters lining the narrow street, odor from the cholera-sick, and fumes from the many smoke-devices. There was no such thing as fresh air.

The smoke balls were made by mixing 1 lb of powdered sulfur, 1 lb of resin, 1 lb of table salt, 1 ½ lb of tar, 3 oz of purified nitrate, 2 oz of purified camphor, and wheat bran and then forming it into balls the size of walnuts.

It was only in the evening that one got some air, as fresh as could be had in the cholera-infected city. The father took his family on a usual evening walk. They always returned home early. The evenings were already dark, as they were already in the middle of September.

When the family returned home, the evening meal was eaten, which did not always consist of easily digestible foods. The father took his usual vodka for the appetite. Old habits should not be interrupted. Immediately after the heavy meal, one went to bed. At the slightest feeling of nausea, camphor and elderflower tea were taken.

The disease grew alarmingly. From 8 am on September 10th to the same time the next day, 217 people died of cholera, 449 fell ill, and 1,661 remained hospitalized. But from that day on, both the number of the sick and the number of the dead decreased. And by the 12th of October, there were no more reported deaths.

Therese’s Life after the Epidemic

When the epidemic hit in the fall of 1834, the family Aspegrén lived in an apartment in a large house overlooking a town square – Järntorget. There was, of course, no indoor plumbing. There were rows of outhouses behind each large house and water was carried from the pump in the town square. The iron pump in the middle of Järntorget is still standing. 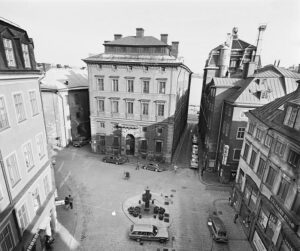 The view from Therese’s apartment at Västerlånggatan 78 (picture taken in 1976). The houses and the square are still the same and the public water pump is still in the middle of the square.

Despite taking all precautions and being pretty well off, Therese’s mother fell ill.  On the 13th of September, at the height of the epidemic, mother Gertrud died from cholera. The rest of the family survived.

In May of 1844, when Therese was confirmed in St Jacob’s church, the family was still living at the same address. But in the fall of that same year, she and her oldest sister, Anna, registered their move from Stockholm, as documented in the church records. Anna stated that she was leaving for Finland and Therese was leaving for Karlstad. Therese became a governess in the family of Otto August and Sara August Malmborg at Lilla Wåxnäs. Therese must have been busy as there were 9 children to take care of by 1845. The oldest was 11 years old. In 1847, Therese returned to Stockholm.  In later census records, Anna had returned to live with her father but Therese was nowhere to be found.

So Therese didn’t leave many footsteps in the digitized records, but one can still visit her childhood environment. Her childhood home, a house that was built in the 1600s is still standing, and is now…a Burger King restaurant! 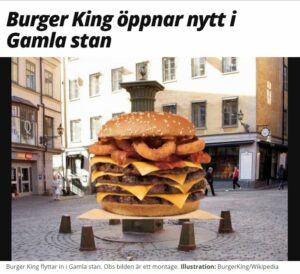 Burger King opens in Old Town. The picture is a montage of a hamburger over the old water pump. The house in the background is where Therese and her family lived.

3 responses to “16. Therese Gustafva Aspegrén and the Cholera Epidemic of 1834”