My last two blog entries told the story about Hedda Heijkenskjöld and Marie-Louise af Forsell, who wrote about a party that the two of them attended. It was described in Marie-Louise’s diary of 16 September 1847:

“During our absence, the family of Colonel Prytz from Malmö had come to visit. Nycander now wanted us to return the visit and I promised, therefore, to put on the gray silk dress on condition that we would then visit Dimanders in the afternoon. It turned out that the Prytzes had already left for Finland – but on our way there, Nycander recognized Tante Netta’s carriage in Jakobsgränd street with Adelaide Rütterskjöld in it. He mentioned to them that we intended to pay them a visit – and when we returned home, Tante Netta had already sent word that they would be home this afternoon.

Thus, at 6 pm, we took the same route as yesterday to Djurgården. To my delight, there were unusually few people at Dimanders, only Nymans, Mrs. Wijkander, ….

The gentlemen played, to which Mrs. Dimander first requested our permission, and Mrs. L. (one of the decent Mamselles Strömberg), together with the girls Rütterskjöld and I, spent the whole evening in the parlor, conversing. It can easily be understood that I had fun, as my stocking was allowed to rest undisturbed in Hedda’s admirable valérie.”

One of the girls Rütterskjöld was Augusta.

Augusta Mariana Rütterskjöld was ranked as 12 of the 92 girls who were confirmed in St Jacob’s parish in Stockholm in the spring of 1844. Her high ranking was of course due to her father’s wealth and title. He and his siblings had inherited the ironworks at Aspa and Olshammar on the northwestern shores of Lake Vättern. He thus had the title of Patron of Ironworks (Swedish: brukspatron), a respectable title that signaled wealth.

But the truth is that by 1844, he was likely not the reason for Augusta’s high rank. Pastor Petterson would have been aware of Augusta’s father’s problems at this time. It is more likely that her high rank was based on the status of her uncle, Anders Dimander.

This is Augusta’s story. But it is also a story about her mother and grandmother.

Augusta was not surprised that her father was not attending her confirmation. And she was used to explaining her father’s absence.

“He can’t leave his ironworks, of course.”

Actually, all she had to say, as a way of explanation, was that her father was an owner of some ironworks. Everyone would understand that he had great responsibilities far from Stockholm and couldn’t come home. Augusta even believed that. And she didn’t miss him; she didn’t even know him.

Augusta’s mother, Sophia, devoted all her time to running the large household in Stockholm. They lived in a grand house on Regeringsgatan 66 which Sophia and her sister, Anna (Netta) Dimander, had inherited from their parents. Netta Dimander was a wonderful and socially prominent woman. Everyone in the upper social circles of Stockholm knew her, and the parties she hosted were splendid. Her husband, Anders Dimander, was equally well-liked and respected. He was Stockholm’s “stadsmajor” a high position within the city’s military defense. Having lost their only child, Augusta’s uncle had become a surrogate father to her. The Dimanders also lived in a large house that they owned, at Regeringsgatan 71. They were almost neighbors.

Augusta’s parents were Ulrica Sophia Nyman and Gustaf Rütterskjöld. They had married in Klara parish on 2 December 1822. Their first daughter, Lovisa, was born the following year. Two more daughters, Adelaide and Jaquette, were born before they moved to a house on Stora Nygatan 20 in the Old Town. It was the house where the famous poet Bellman had once lived. Sophia had inherited the house when her father died, but as a married woman, she had no rights to her own wealth, so her husband, Gustaf, was the one who became the legal owner of the house. Sophia now gave birth to their first and only son, Ewert. The following year, she took the 4 children, the oldest being 4 years old, and moved home to her mother in the big house at Regeringsgatan 66. Gustaf stayed behind with a live-in maid. And then, the following year, Sophia gave birth to Augusta. 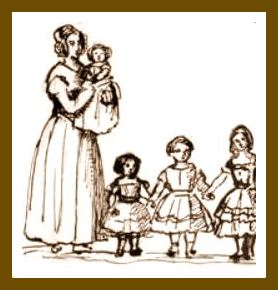 Mother with 4 daughters (part of drawing by Queen Victoria)

As there are several generations referred to in this story, I thought a summary of the family members would be helpful:

(I have written about Adelaide and Jaquette previously in a blog entry about Mrs. Dimander.)

I have spent several evenings looking through census and church records, trying to figure out the family situation. Where was Augusta’s father?

It was obvious that Gustaf had left the family. In 1833, Sophia changes her name in the church records from Mrs. Rütterskjöld to Mrs. Nyman, her maiden name. In the 1835 census records for Sophia and her 5 children, it is her brother-in-law, Anders Dimander, who has signed the form and added a note that the husband’s whereabouts are unknown. And in 1844, Sophia changes her title to widow – maybe a socially acceptable way of explaining her husband’s absence.

I then search for Gustaf Rütterskjöld in the church records of the parish where his ironworks are located, Hammar parish. It shows that he and his brother Rutger moved to Olshammar in 1836 to join their older brother Carl. He now resides in Olshammar and only makes visits to Stockholm.

The next step is to look at the property deeds for their home at Regeringsgatan 66. It had first belonged to Sophia’s father, Israel Gustaf Nyman, a fabric merchant (Swedish: klädeskramhandlare). I look up his estate inventory in 1824 following his death. His wife would inherit half of his estate and the two daughters would each get a fourth of the total value of the estate which would be around $4 million today. Sophia gets her share in terms of property – a house at Stora Nygatan 20 in Old Town. That explains why Sophia and Gustaf moved there around 1827. But as married women did not have the legal right to their own wealth before 1874, it was her husband Gustaf who became the legal owner of the house – something that would turn out to be disastrous. 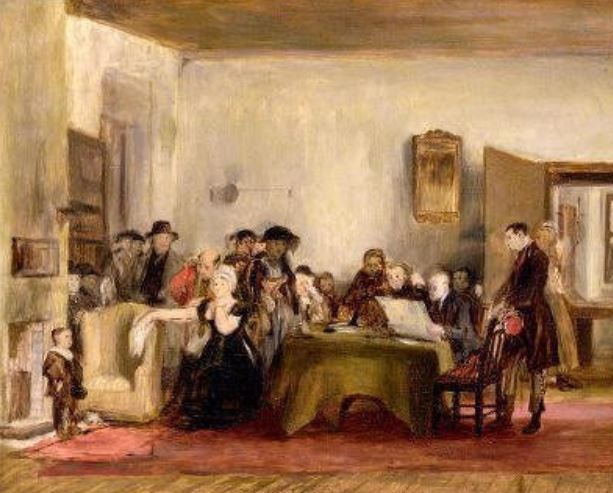 Sketch for Reading of the Will, by Sir David Wilkie c. 1820

Augusta’s grandmother, Helena, dies five years after her husband, in 1829. Now the estate will be divided between the two sisters, Netta and Sophia. This will be interesting.  The property deed shows that the ownership of the house at Regeringsgatan 66 will be split equally between Sophia and Netta’s husband, Anders Dimander. According to the law, it should have been split between the two husbands as a wife wasn’t legally independent. So what does it mean that Sophia and not her husband Gustaf became the owner of half of the house?

With anticipation, I look up the estate inventory following Helena’s death. It is a balance sheet of credits and debits. The total worth is only $476,00 in today’s value. But on the pages following the balance sheet are Helena’s last will and testament. Reading it is eye-opening and highlights the plight of women in a time when they had no financial rights and their husbands were their guardians.

“After my death, my estate shall … be equally divided between my dear daughters Anna Helena and Sofia Ulrica who are both equally dear to me.

The part of the inheritance that will be bequeathed to my eldest daughter, Anna Helena, will be given to and be at the disposal of her and her husband, the tobacco manufacturer and City Major at Stockholm’s Citizens’ Infantry Corps, Mr. Anders Dimander, who for his orderliness in the conduct of his affairs and his propitious lifestyle has my full confidence and my utmost esteem.

A completely different arrangement should be made with the inheritance that will be bequeathed to my younger daughter Sophia Ulrica, married to the ironworks owner, Mr. Gustaf Rütterskjöld.

This brother-in-law of mine, ironworks owner, Mr. Rütterskjöld, has revealed the most certain and imperceptible signs of his inability to take care of himself and his wife’s estate, to which he is also unjustified even if he is placed under guardianship.”

Helena then documents her son-in-law’s mismanagement of Sophia’s inheritance from her father. He had borrowed on “his” house in Old Town and defaulted on his loans. There wasn’t much left of Sophia’s inheritance from her father. This in turn had led to legal action and Gustaf had himself been put under guardianship by the court. That meant, he was not allowed to do business or manage his own money anymore. Helena wrote this will in 1827, about the time when her daughter left her husband. The will (in Swedish) can be found at the following link. It is fascinating. 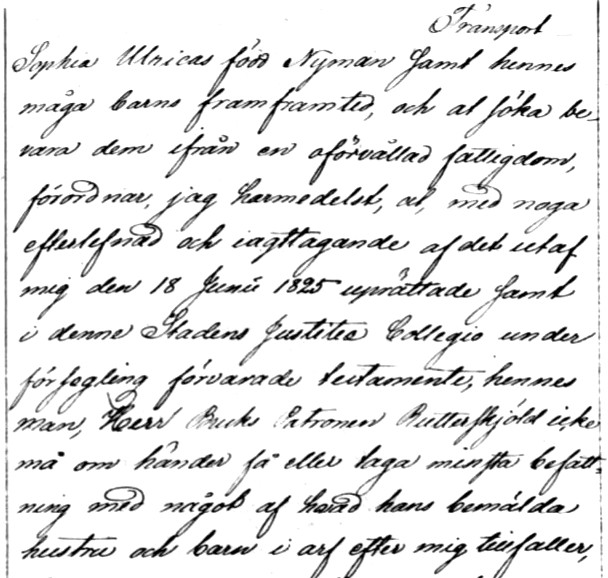 So when Helena died, the ownership of Regeringsgatan 66 was passed to Anders Dimander and Sophia Nyman, each owning 50%.

“It is good that I have had so much fun earlier this winter because now, it is the end of it. The last amusement I had was a sleigh ride to Haga that Mrs. Dimander organized; very charming. It was awfully fun. I rode with Carl Hedin, … , Emma Hedin was also with us and we drove home in the most splendid moonlight – it beautifully lit up the white snow. Too bad we rode in a covered sleigh. The road conditions were perfect for the sleighs and it was not cold. Imagine how many layers of clothing I was wearing: at least 15 shawls, cardigan, and anything one could think of….” (Letter from Lotten Westman to Augusta Söderholm, March 1846)

In 1848, Jaquette marries Theodor Wijkander. Anders Dimander signs the marriage banns instead of her father.

Then in 1852, Augusta’s mother, Sophia, dies of tuberculosis at the age of 59. There is a note in the church records that she is divorced. Her obituary doesn’t mention her husband – only her children and grandchildren.

In 1857, Anders Dimander dies and the ownership of Regeringsgatan 66 changes again. Now the husbands of Jaquette and Adelaide become part-owners of the house.

Augusta’s father, Gustaf, dies in Stockholm in 1875. There is no obituary, just a note in the paper.

And Ewert becomes a farmer.

The sisters live long lives, travel to spas at Marstrand and Strömstad in the summers (yes, that is noted in the daily newspapers), and do as well as their grandmother had hoped for when she wrote her will in 1827. She would also have been delighted to know that all her granddaughters would in their lifetime see major changes towards women’s independence from men and legal guardians. In 1863, the laws changed so that single women became independent and allowed to manage their own finances at the age of 25. In 1874, married women were granted the right to manage their own money. In 1884, single women became legally independent at the age of 21, and in 1921 that also included married women.

Today, all women are legally independent at the age of 18.

2 responses to “12. Augusta Mariana Rütterskjöld and her Absent Father”