Cecilia Koch was ranked 7 out of the 92 girls who were confirmed with Augusta in St Jacob’s parish in Stockholm in May of 1844.

Two months earlier, Augusta had received a letter from her mother Anna. Augusta had been attending Mrs. Edgren’s school and boarding with the family Edgren, but now the Edgrens were moving to Morup on the Swedish west coast. Augusta and some of her classmates would be transferring to a school run by Miss Andriette Frigel. As Augusta would not board with her new teacher, the letter from mother Anna instructed Augusta to inquire about new boarding arrangements for the coming fall.

My beloved child, I have now written to Mrs. Edgren and asked her where and with whom I shall let you stay; we will see if she knows a suitable place for you if you need to remain [in Stockholm]. It is truly a great sacrifice of me to let you stay up there for another year, I need you so much at home.

…It would be helpful and fun for both of you if Cecilia Koch made sure that she came to the same place as you – tell her that. Now ask Mrs. Edgren to find a good place for you and I will take care of the agreement when I come up. By the way, ask how much Miss Hellberg charges and find out what kind of person she is and with what kind of people she socializes, and if she can bring out into society those in her charge. It is very important to find a place that has a good reputation and where people are known for their honorable character. If you can find a place where they daily speak a foreign language, that would be good for you. Tell Mrs. Edgren that. If she knows of such a family and they could take you in, that would be very good. I think she knows many foreign families.

…Write to me soon and tell me what you know, also what Mrs. Edgren has said about you remaining in Stockholm if she thinks that’s what you should do. On Wednesday, I sent you your black everyday dress – I hope you have picked up the package. I hope you like it. There were also a pair of black silk gloves.

God bless you my own child and make you as happy as your mother wishes.

Well, Augusta did find a suitable family to board with – the family of Baroness Jaquette Ribbing. Not a foreign family but certainly one that met all the other wishes regarding reputation, character, and high society.

But what happened to Cecilia Koch who Augusta’s mother mentioned in her letter? And who was she?

Johanna Cecilia Mary Lovisa was born on February 14, 1828, to Michael Koch (1792-1869) and his first wife, Johanna Amalia Fröding (1801-1830) on their estate, Vågsäter, north of Uddevalla on the Swedish west coast. The Koch family was a powerful and wealthy family in Uddevalla. Michael Koch was a major in the navy. He had even sailed to the West Indies. Later in life, he would live in Uddevalla and contribute to the establishment of a cotton mill and a railroad. 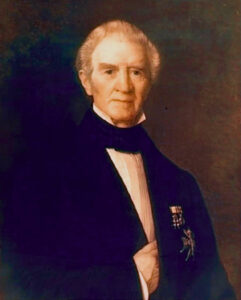 Cecilia’s mother died in childbirth in 1830, leaving her husband with 2-year-old Cecilia, a 1-year-old son, and a newborn baby. As was common practice, Cecilia’s father remarried. He and his second wife, Emma Wilhelmina Iggeström (1809-1891), had 4 daughters and a son. The children Koch (those who survived to adulthood) had interesting lives and married well. 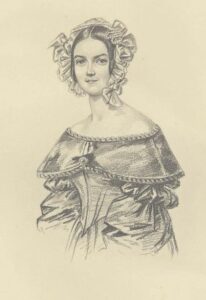 When Cecilia became a teenager, it was time to send her to Stockholm where she would get a good education, be introduced into society, and attend balls and concerts with the unspoken aim of meeting some suitable and eligible young man. Augusta, who was a year older than Cecilia, had likewise been sent to Stockholm in the fall of 1842. Augusta was boarding with the Edgren’s but Cecilia was living somewhere else and just attending classes.

When Augusta started in Miss Frigel’s school in the fall of 1844, we don’t know if Cecilia was still in Stockholm. Augusta studied with Miss Frigel during the fall of 1844 and the spring of 1845. Then she moved back home to her mother at Loddby but stayed in touch with her friends through letters. There is a letter from Lotten Westman in Stockholm to Augusta, written on October 20, 1846, that mentions Cecilia:

You sent me greetings from Cecilia Koch. When you write to her, please send my sincere greeting. She is like a bright spot from our school days. I only knew her for a short time but I liked her so much. Greet her a thousand times. She is such a fortunate girl who gets to be with Mrs. Edgren. She must be so loved by all of those around her. My aunt had heard about it when she was in Varberg.

Yesterday, I received a letter from Major Koch’s wife. Enclosed was the ring that Cecile always wore and which contained a lock of her hair. It was a dear memory of the untimely deceased childhood friend. She was too perfect to live here with us and, therefore, she also left us young. It was very thoughtful of Mrs. Koch to remember me.

Oh no, Cecilia died! I checked the newspaper and found her obituary. It stated that Cecilia had died at an age of 18 ½ years on October 23, 1846. She died peacefully at Vågsäter. I check her death certificate. She died from measles.

Measles epidemics were common and most started in coastal towns before moving inland. Gothenburg was one of those cities. A provincial doctor in the town of Vänersborg summarized the measles epidemic on the west coast of Sweden in 1846 as starting in the province of Bohuslän and arriving in Vänersborg at the end of October. It spread mainly through the schools and by December, most homes had reported cases.

Maybe Cecilia contracted measles while in school in Morup and died later at home? Morup is located on the coast, south of Gothenburg.

The 1846 measles epidemic was one of the worst in Gothenburg in the 1800s. Young children who had not been exposed during previous epidemics were vulnerable and around 10% of the young children in the city died.

Cecilia was buried in the Koch family burial place on a peninsula by Vågsäter. It is a beautiful place to visit today. 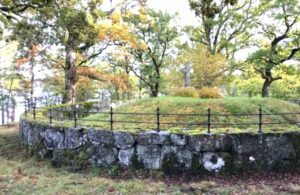 The feature image is a detail from a painting by Christian Krohg, 1883.