1. Eva Charlotta (Lotten) Mörner af Morlanda – “The Good and Sweet Lotten” and “the Miss with the Cup”

1. Eva Charlotta (Lotten) Mörner af Morlanda – “The Good and Sweet Lotten” and “the Miss with the Cup”

For each parish in Sweden, there is a library of church records – births, baptisms, confirmations, etc. Early on, I found that one of the best places to find Augusta’s friends in Stockholm was to look at the records of confirmations and first communions. Some parishes listed them alphabetically but in St Jacob’s parish, Pastor Petterson listed them first by gender and then by his perception of their importance – based on their family names and their fathers’ professions. Augusta was listed as number 10 out of the 92 girls.

A little over a year ago, I decided to find out more about the first 20 girls on the list. I have now written about 19 of the girls and I will finish my series with the top-ranked girl: Eva Charlotta (Lotten) Mörner af Morlanda.

Lotten Mörner was born on August 17, 1827, in Växjö, a small but important provincial town. Both her parents were from noble families. Her father, Count Carl Mörner, was the provincial governor and her mother was a baroness: Constantina Charlotta Ottiliana Wrede af Elimä. Lotten was the couple’s second child; the firstborn son had died in infancy. She also had a 3-year-old younger brother, Stellan Fabian.

Lotten probably grew up in Växjö but was sent to Stockholm to be introduced to society. She might have lived with relatives in Stockholm. Some family members had positions within the Royal Palace. Lotten’s father had been the queen’s chamberlain before he became governor and his cousin, Charlotta Eleonora Ebba Erika Emerentia Mörner, was one of the queen’s maids of honor.

But what happened to Lotten after her confirmation?

I usually start by searching for an obituary. Sometimes an obituary will tell me details about the woman’s life and her family. Lotten’s obituary was long and informative. The first major event in her life was the untimely death of her mother in 1855. Now, Lotten had to take on the role of hostess in the governor’s residence. She continued to take care of the household even after her father retired. When he died in 1870, Lotten returned to Stockholm and lived in an apartment at Norra Smedjegatan 34. That is where the shopping center Gallerian is now located. 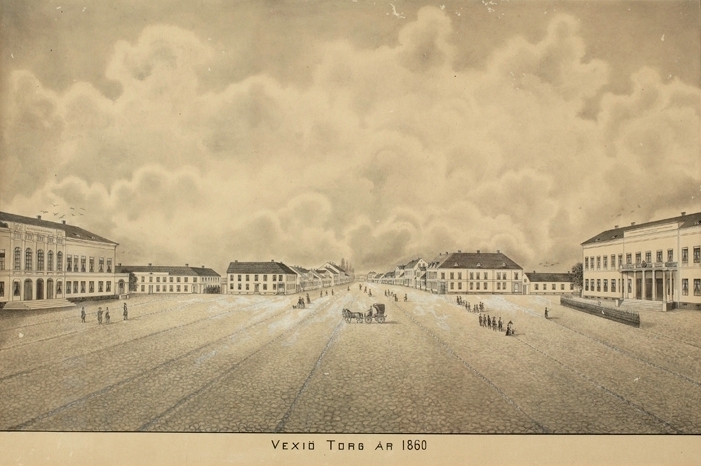 The building on the right is the Governor’s Residence in Växjö as depicted in 1860. This was the home of Lotten Mörner. The residence was built between 1844-1848 after a devastating fire in Växjö in 1843. Lithography by  A.G. Fagerholm.

This silver cake server was said to have been used by Lotten’s father, governor Carl Mörner as a trowel at the groundbreaking ceremony for the new governor’s residence in 1844.

Then I search for images of Lotten. The House of Nobility in Stockholm has a searchable archive of portraits and I find some of Lotten. All the pictures show her in profile. The accompanying text to one of the portraits states “Lotten Mörner (with the cup)”. 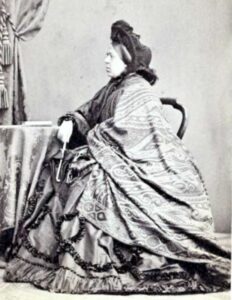 Lotten Mörner (with the cup)

Interestingly, I find a very similar picture of Lotten Mörner in someone’s old portrait album online. She is wearing the same paisley shawl and bonnet but the dress and her parasol are different! 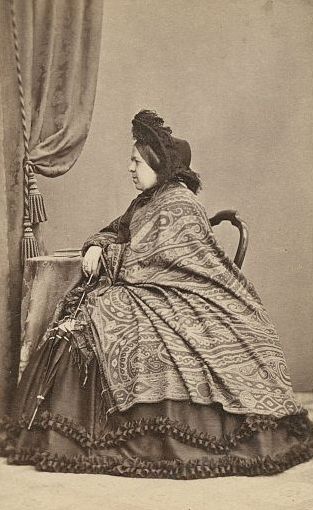 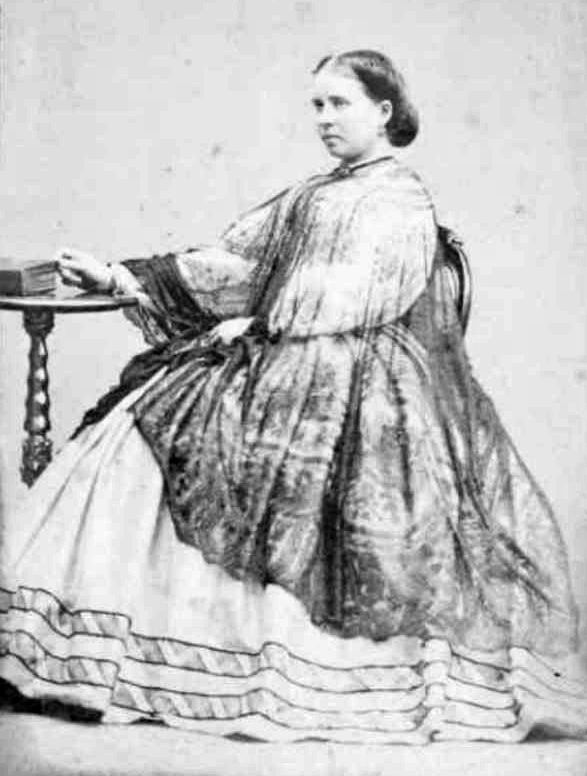 Lotten Mörner This one is also from the House of Nobility’s archive.

Then I find a picture of her in a museum. It is annotated with the text “Lotten Mörner (with the eye)”. 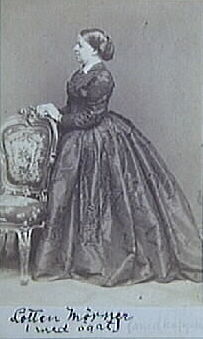 Lotten Mörner (with the eye)

I search on different combinations of words and within different domain names and suddenly I find something: A biography written in 1937 by another nobleman, Adam Lewenhaupt. He writes about his youth and how his mother’s friend would visit them in the summer:

“Another of mom’s childhood friends, who was born the same year and for once was someone who was not our relative, was Miss Lotten Mörner. She visited us every summer. The most distinctive thing about her was a most peculiar abnormality in one of her eyes. The upper eyelid severely drooped against her cheek. Mr. d ’Otrante always referred to her as “the Miss with the cutlet on the eye”. When she turned her eye, the “cutlet” trembled and jumped up and down. A modern surgeon would probably have been able to correct it. But at that time, it was out of the question.

Others referred to her merely as “the Miss with the cup” as she was the owner of a precious Sèvres piece with Marie Antoinette’s portrait. It was later bequeathed to the Nationalmuseum (Sweden’s National Museum of Fine Arts and Design).

Financially well-off, she liked to have small soirees in her apartment at Norra Smedjegatan in Stockholm, near the Catholic Church, which the Queen Dowager used to attend, and some small hotels, which others visited.

She was always happy to be invited, but if she had a small pimple or some other blemish, she would not show herself in public. On the other hand, she didn’t care about her abnormal eye.

She was the most indecisive person imaginable. Once, at the moment of departure from Sjöholm, she was asked jokingly if she did not regret leaving and if she might want to stay a few more days. “Yes, I think so,” she answered and got up to step out of the carriage. But Eriksson, the coachman, cracked his whip and the horses set off at full speed. The old woman fell back into her seat and the equipage disappeared down the lane.

By the way, she was benevolent in both word and deed. I got an idea to register all the “good Lotten” and “sweet Lotten” I heard in conversations. But when my mother thought that the courtesy required the same word in response, it became too much for me to record and I got tired of it.”

You can read the original Swedish text here. 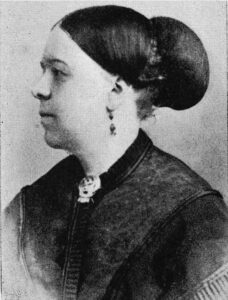 The other Miss Lotten Mörner

I mentioned that Lotten Mörner’s father’s cousin was the queen’s maid of honor. She was born in 1816 and thus 11 years older than our Lotten. The problem is, or was, that she was also referred to as Miss Lotten Mörner (until she married August Wachtmeister in 1852). So during several years in their youth, the two girls with the same name were both on the social scene in Stockholm.

The Swedish singer, Jenny Lind, also mentions Miss Lotten Mörner in her biography but it is also most likely the older Lotten.

So in 1870, at the age of 43, Lotten had returned to Stockholm and lived at Norra Smedjegatan 34 where she hosted small soirees for her friends. She died in 1879 after a long battle with breast cancer. She was only 52 years old. The good and sweet Lotten, as she was so often called in conversations, had included many charities and a girls’ school in her will. And of course, she bequeathed her beautiful cup (and additional pieces of Sèvres porcelain) to the National Museum of Art.

Lotten Mörner’s Sèvres cup of Marie Antoinette – and other pieces

One response to “1. Eva Charlotta (Lotten) Mörner af Morlanda – “The Good and Sweet Lotten” and “the Miss with the Cup””