I pick a random page out of Cecilia’s memory album. 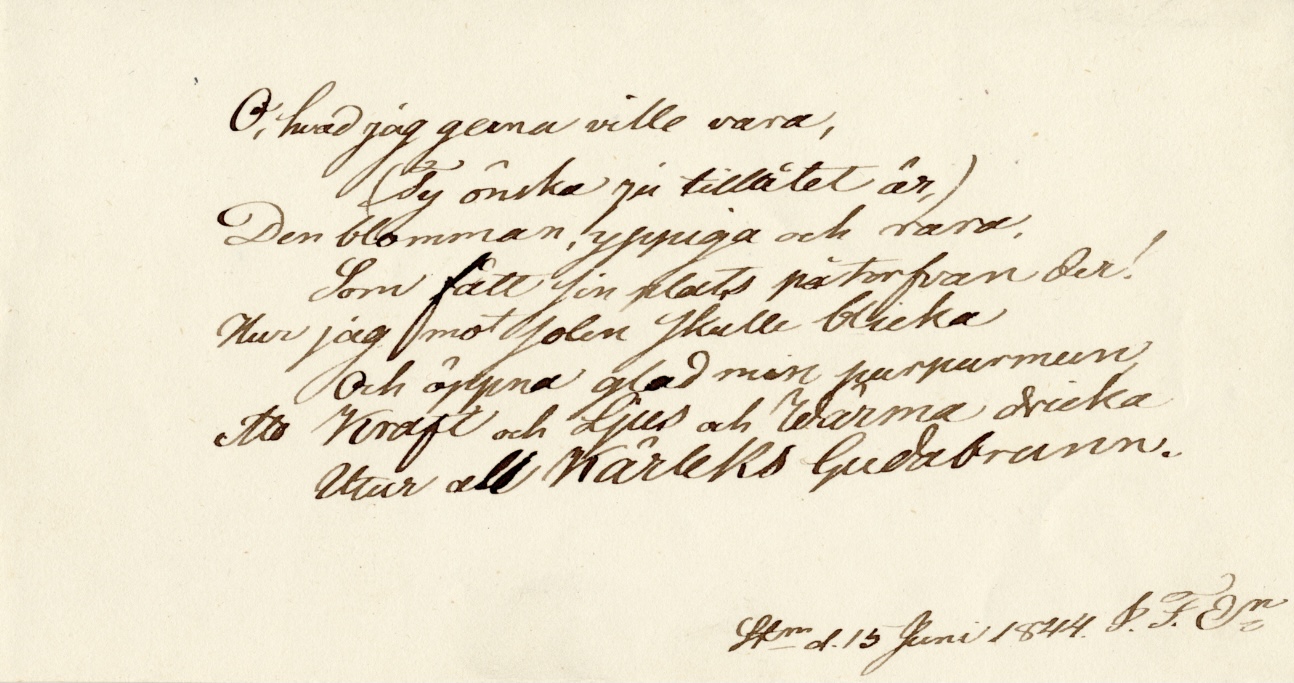 This one has a handwritten poem with the word Kärleks (Love’s) emphasized in larger letters. The page is signed with what I interpret as S. F. En. I am not sure about the S, but what else could it be? I wreck my brain; are there any friends of Cecilia and Augusta whose last name is En (it is a proper Swedish last name) or starts with En? I check the lists of confirmation friends, school friends, members of the secret orders – the Innocence and the Amaranth – that Augusta belonged to. I find nothing.

I then take another approach. I check to see if the poem might have been written by someone else and published. It takes some playing around with Google, like changing the preferred language and searching on various parts of the poem. It works and I find the source! 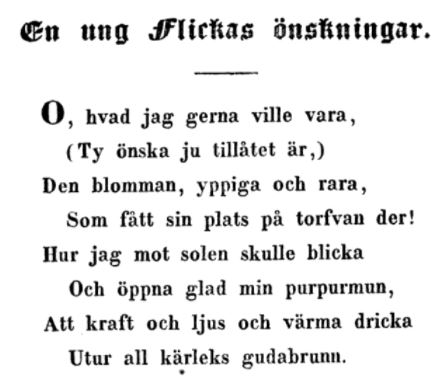 Oh how I would want to be
(for wishing is allowed)

The flower, lush and lovely
which sits there on the turf

To imbibe power, light, and warmth
out of God’s Well of Love 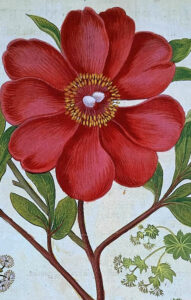 The poem appeared in a book Lyriska toner (Lyrical Tones) by Wilhelmina and was published in 1843, the year before Cecilia received the handwritten page for her album. The title of the poem is En ung flickas önskningar (The Wishes of a Young Woman) and what was copied was the first of the poem’s five stanzas.

There is an introduction in the book, written by the pastor in Clara parish (1825-1831), Frans Michael Franzén. Besides being a pastor, Franzén was also a famous poet. I can see why Franzén was moved by Wilhelmina’s poems. He wrote similar poems that also ended up in girls’ memory albums. And even the bishop in Stockholm, Johan Olof Wallin, wrote poems that were likewise copied.

At the time, women writers often wrote under a pseudonym, and Wilhelmina simply published under her first name. Later, when she became a rather famous author and translator, she used her real name, Wilhelmina Stålberg.

That is when it hit me. The handwriting of the poem in Cecilia’s album looked like that of an older person. It was definitely not written by someone of Cecilia’s age, someone who had perfected their cursives, dipping the quill in the inkwell and making beautiful letters. If this was a poem that was known by pastors, could S. F. En belong to the clergy?

The answer was staring me in the face! En could mean that the last name started with E and ended with n, not starting with En. Cecilia and Augusta attended Edgren’s school, founded and operated by Pastor Johan Fredrik Edgren and his German-born wife, Lovisa Carolina Wilhelmina Dethmar. And the initials were J. F. and not S.F. Pastor J. F. Edgren had written the poem for Cecilia before she was leaving Stockholm in June of 1844.

Pastor Edgren later became important in Augusta’s life. He officiated the wedding between Augusta and Adolf Nordwall in Morup’s parsonage. I wonder if she also got a poem or if he recited any during the wedding ceremony.