In Cecilias’s memory album, there is a lovely drawing of a steamboat named Le Vivant, moored to a pier and with a line of people waiting to board. There is also a small island in the drawing with tall poplars and a sculpture. The island is connected by a walking bridge to the opposite side of the river. On that side, there is a prominent, 5-story building. The painting is annotated with “Genève” in the lower-left corner, “L’Île de Rousseau” under the drawing, and “Auror” in the lower right corner. I assume Auror (or Aurore) was the name of Cecilia’s friend who gave her the drawing. 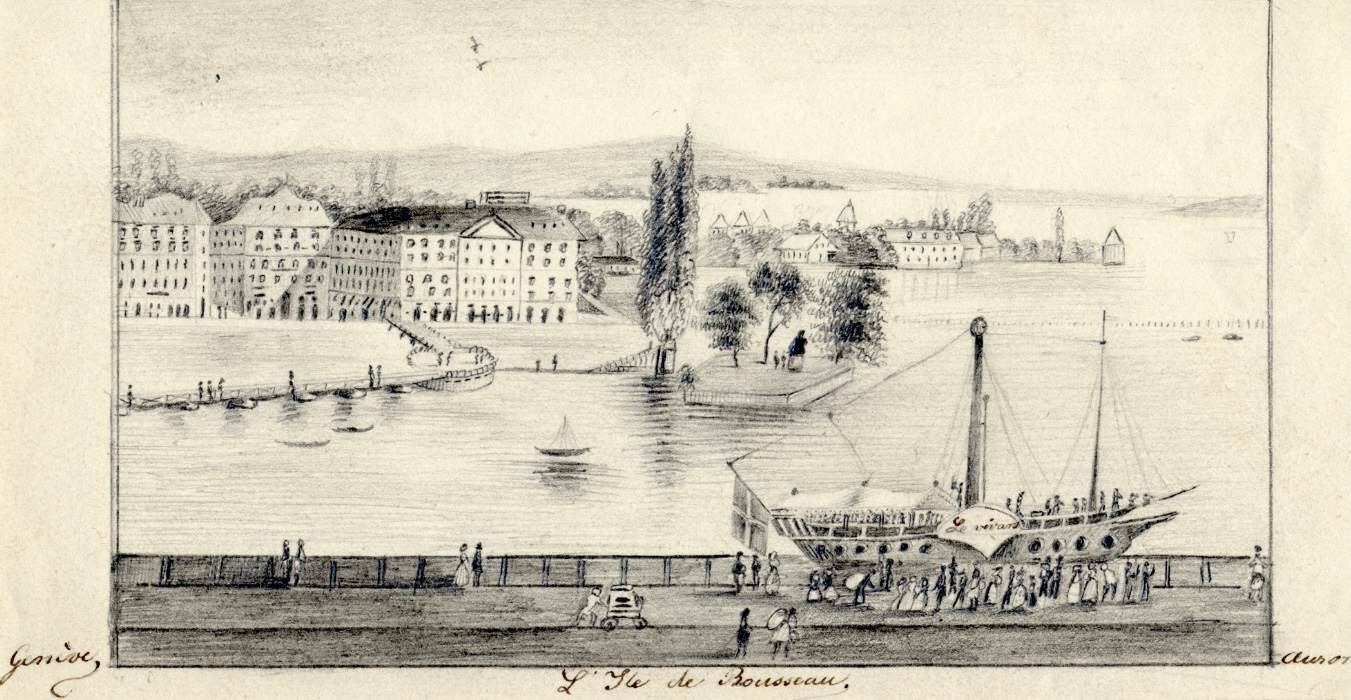 Île Rousseau is a small island in the Rhone River at the center of Geneva. It was named after Jean-Jacques Rousseau, the famous Swiss philosopher and writer. In 1834, a bridge was built across the river with a connection to the island. The bridge – Pont des Bergues – was named after the magnificent hotel at the end of the bridge, Hotel des Bergues (the large 5-story building in the drawing and nowadays the Four Seasons Hotel des Bergues).

It is easy to find old paintings of Île Rousseau online but most seem to be later renderings of the island. Some paintings feature buildings on both sides of Hotel des Bergues. These would have been painted after 1850. Other paintings feature two bridges. The second bridge, Pont du Mont-Blanc, was built in 1862.

Aurore’s drawing depicts Geneva between 1834 and 1850. I initially pictured Aurore sitting on a bench in Geneva on some journey through Europe with her parents. On her lap is a loose-leaf sketchbook and she is busy sketching the tranquil view with her small graphite pencil.

More googling, and I find an almost identical image! 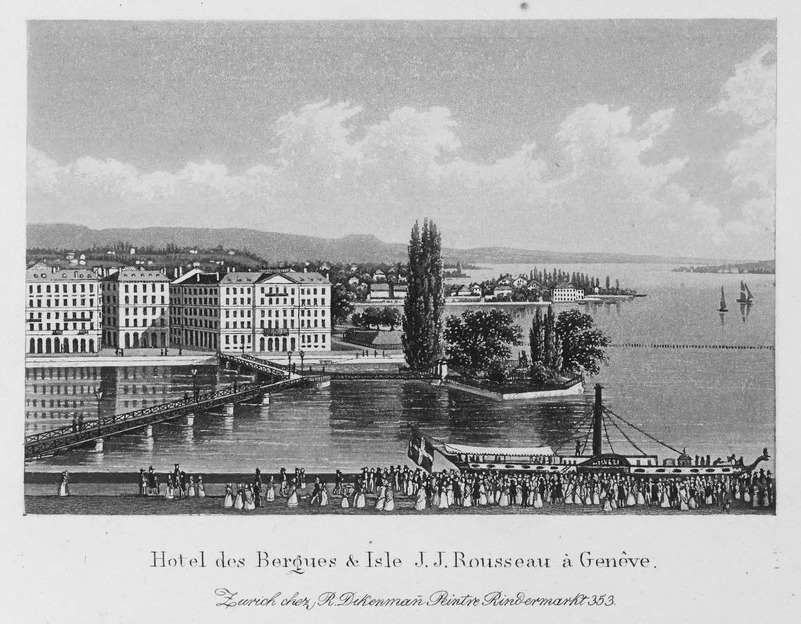 Besides being a much more detailed print, the main difference between Aurore’s drawing and this print is the steamboat. This one is much larger and ornate.

I just realize that Aurore, of course, did not make her drawing en plein air but most likely made it in school, learning to draw by copying a print. I am sure that in some illustrated magazine, or some book belonging to her teacher, there is an image of the steamboat “Le Vivant” moored in Geneva. I just haven’t found it yet. 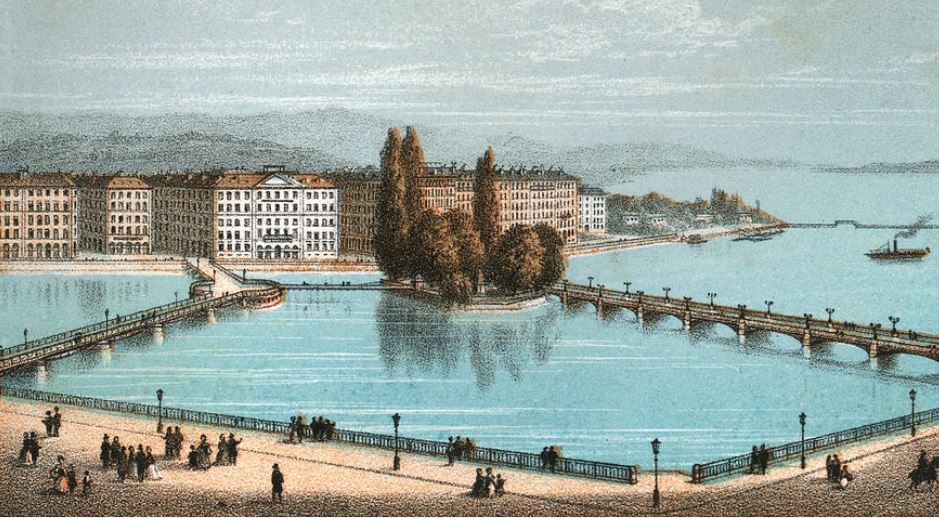 The steamer in the black-and-white print above is Guillaume Tell, the first steamboat in Geneva. It was built in 1823. 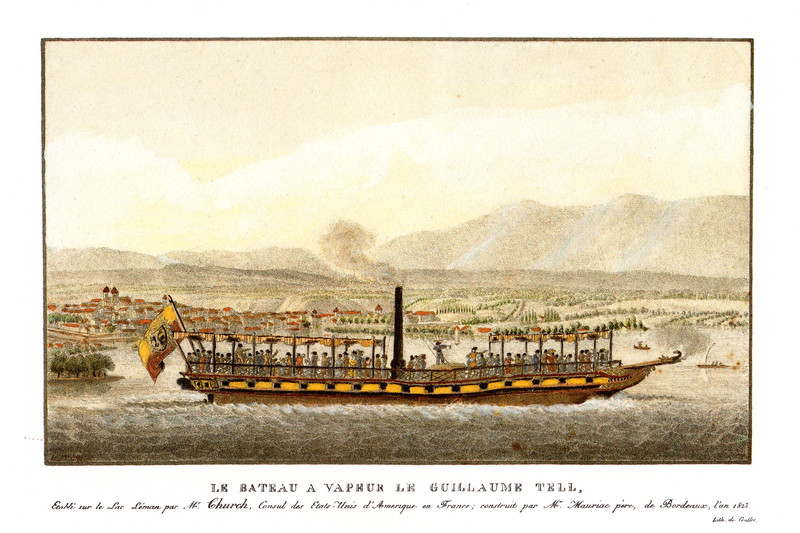 Images of Île Rousseau as seen from Hotel des Bergues

These images are from the opposite side of the river, maybe painted from a window in Hotel des Bergues. 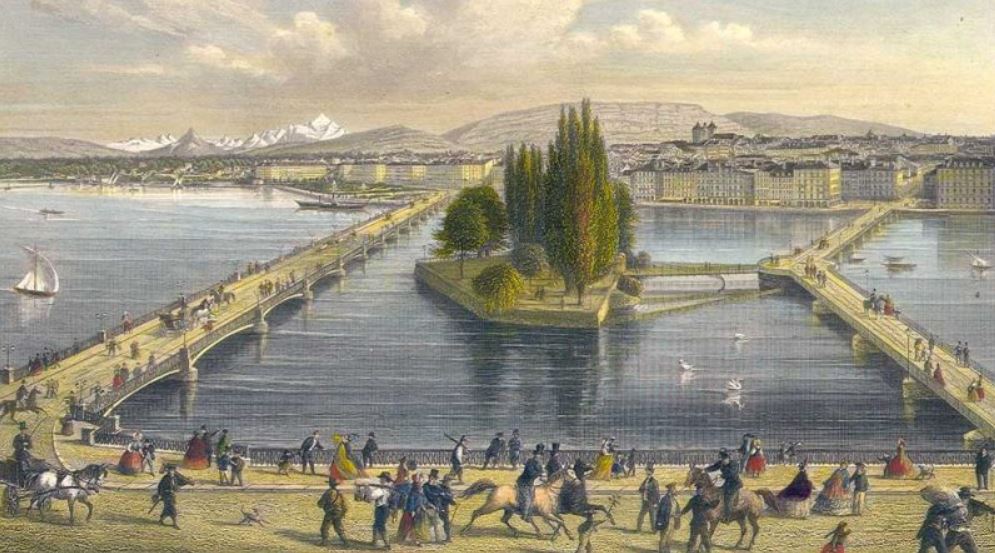 Lastly, I found a beautiful lithograph by Jacottet with credits also given to Adolphe Jean-Baptiste Bayot (1810-1866).  The view is from Hotel des Bergues with Île Rousseau to the left and the bridge (Pont des Bergues) to the right. Based on the dresses of the pedestrians (it looks like the women are not wearing crinolines, but rather layers of petticoats), I would guess that this lithograph was made in the late 1840s or early 1850s.

The following images are cropped (close-ups of parts of the print). 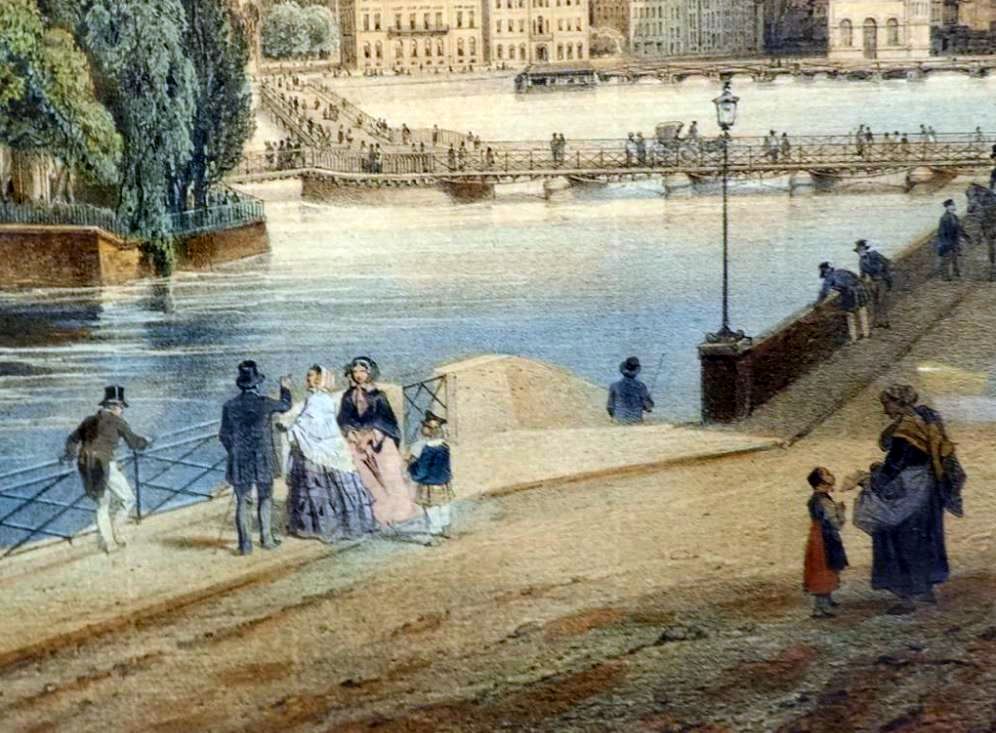 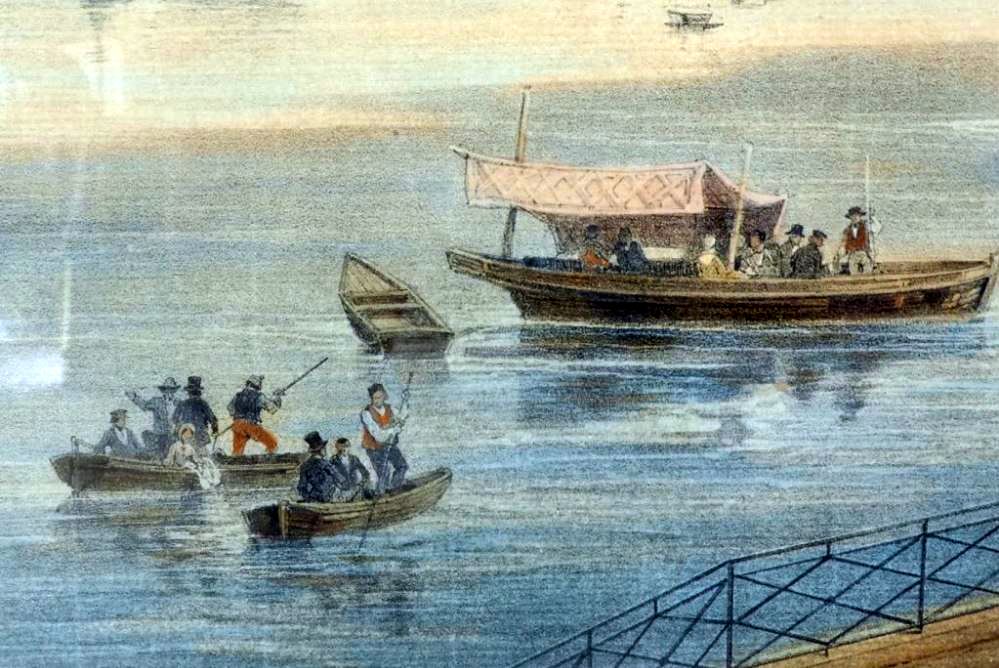