Last week I wrote about Amelie Ahlberg who drew a picture of Haddon Hall. I speculated that her older sister, Charlotte, might also have given Cecilia a drawing for her memory album.

In Cecilia’s album, there is a pencil drawing of a house. The painting is signed Charlotte and is dated 30 January 1844. Charlotte was a very common name in the 1840s and it is of course possible that the drawing was made by some other girl named Charlotte. However, because both drawings, Amelie’s and the one signed Charlotte, are excellent, I believe this one was in fact made by Charlotte Ahlberg. 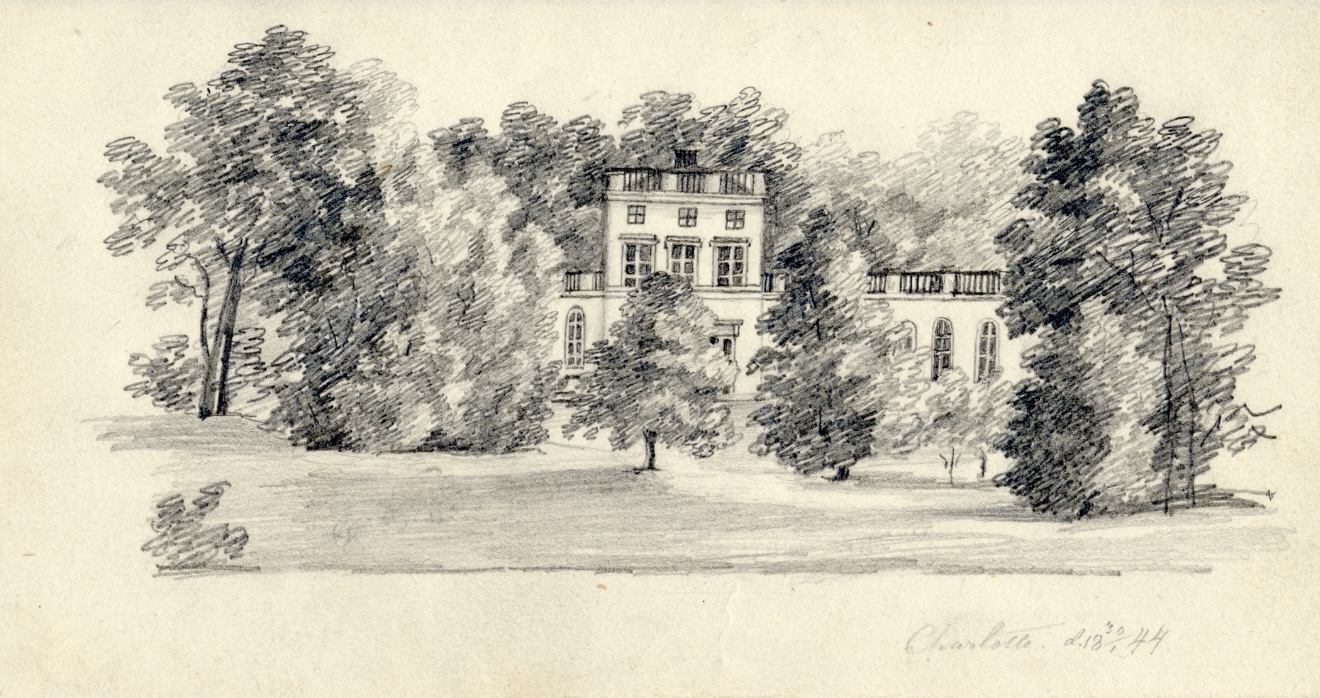 Again, Google Lens nailed it and I should probably have recognized it anyway. This is Haga Palace outside Stockholm. It is now the home of the Swedish crown princess and her family. But which rendering of Haga Palace did Charlotte copy?

I search the Swedish Royal Library for images of this palace and can hardly believe my luck. There is a digitized copy of a lithograph from 1835 and when I crop it, I am stunned. Charlotte was a great artist!

Here is the full-size lithograph print: 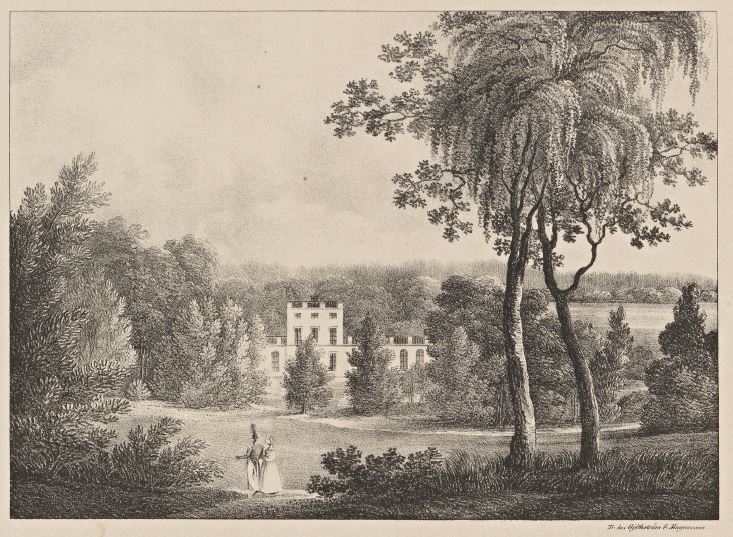 Charlotte Henriette Bothilda was the oldest child of Dr. Johan Daniel Ahlberg and his wife, Louise Henriette Moll.  She was born in Stockholm on September 20, 1828. She was confirmed in St Klara parish in 1845 and inducted into the Order of the Innocence in January 1846. Being inducted into the two secret orders, the Innocence and the Amaranth, was the introduction to high society. Augusta attended her first Innocence Ball in January 1844, a year before Charlotte.

Another important step was to have one’s portrait painted. To have a drawing made by Maria Röhl was also popular, and in 1852, the three oldest daughters – Charlotte, Emelie, and Eugenie – visited Maria Röhl. 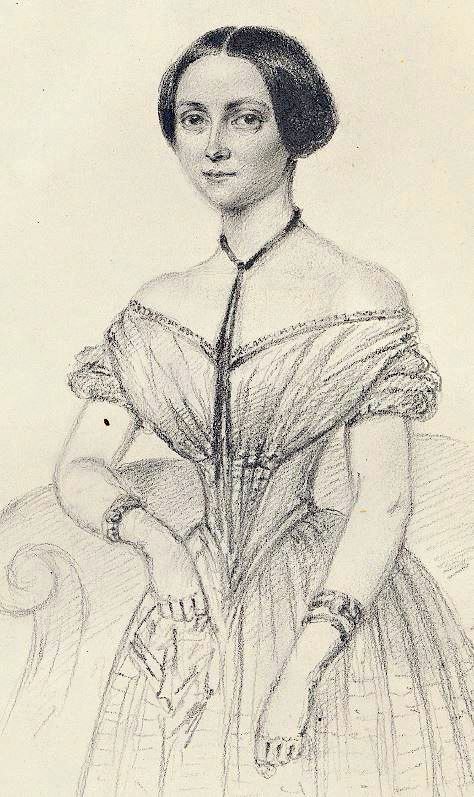 Erik Oskar Weidenhielm (b. 1816) was a nobleman and an officer. He also had his portrait drawn by Maria Röhl. 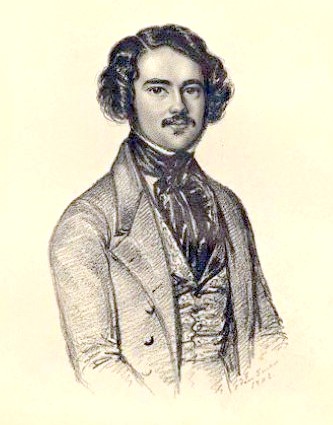 Charlotte and Oskar married in 1857. Oskar had an illustrious career. He became the minister of national defense (Swedish: Statsråd och chef för landtförsvarsdepartementet). They had two daughters, Agnes Charlotta Henrietta (b. 1860) and Dagmar Elisabet (b. 1868).

A friend of Charlotte, Ebba Ramsay , describes their friendship in her autobiography “Om flydda tider: ur en gammal dagbok“. The book (in pdf format and in Swedish) can be downloaded for free at the following link from the Swedish National Library (Kungliga Biblioteket, KB). (Charlotte is mentioned at several places in the book – the first, very endearing description is on page 23.)

Finally, I found several photographs of Charlotte later in life. Her outfits are really stunning. 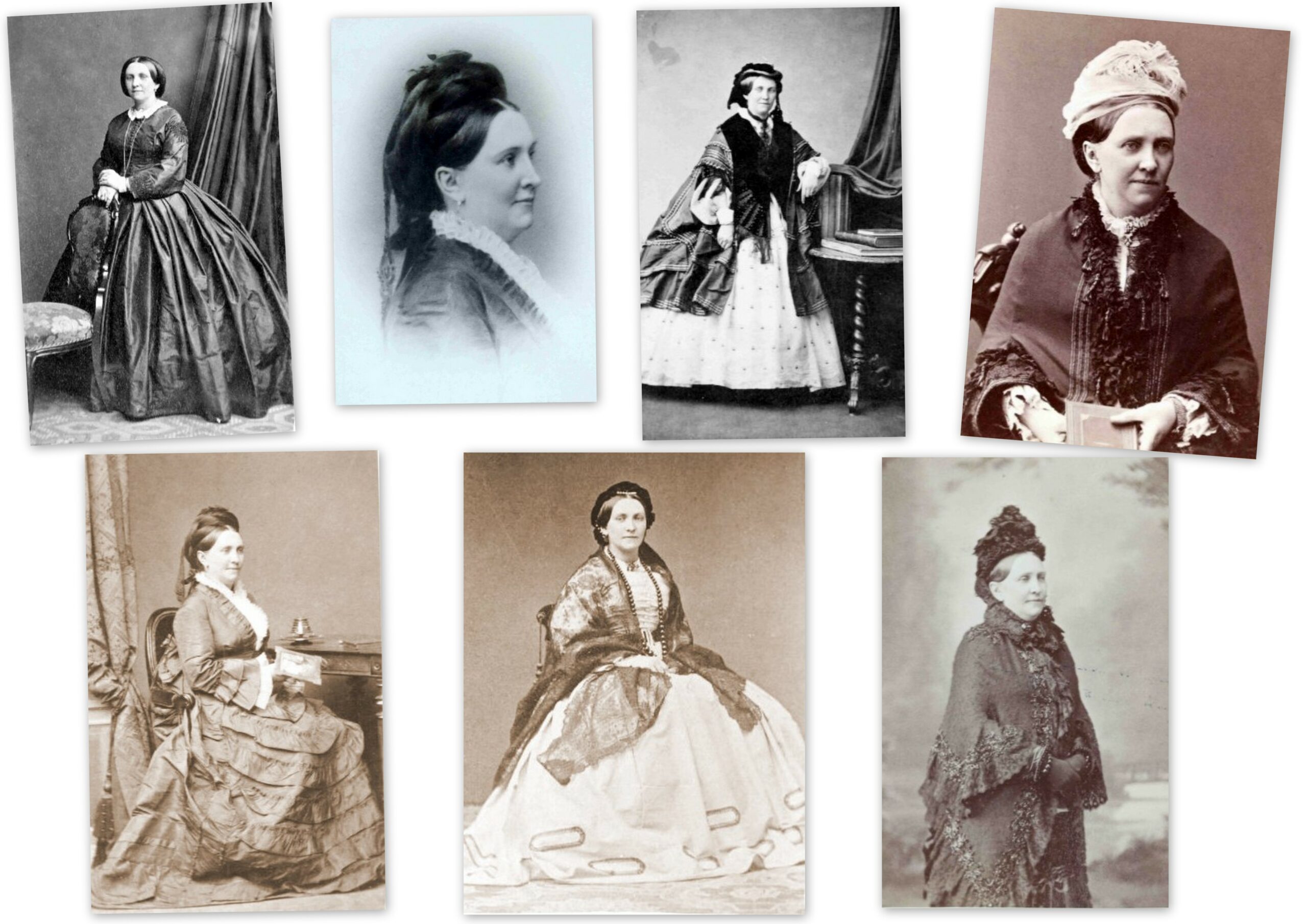