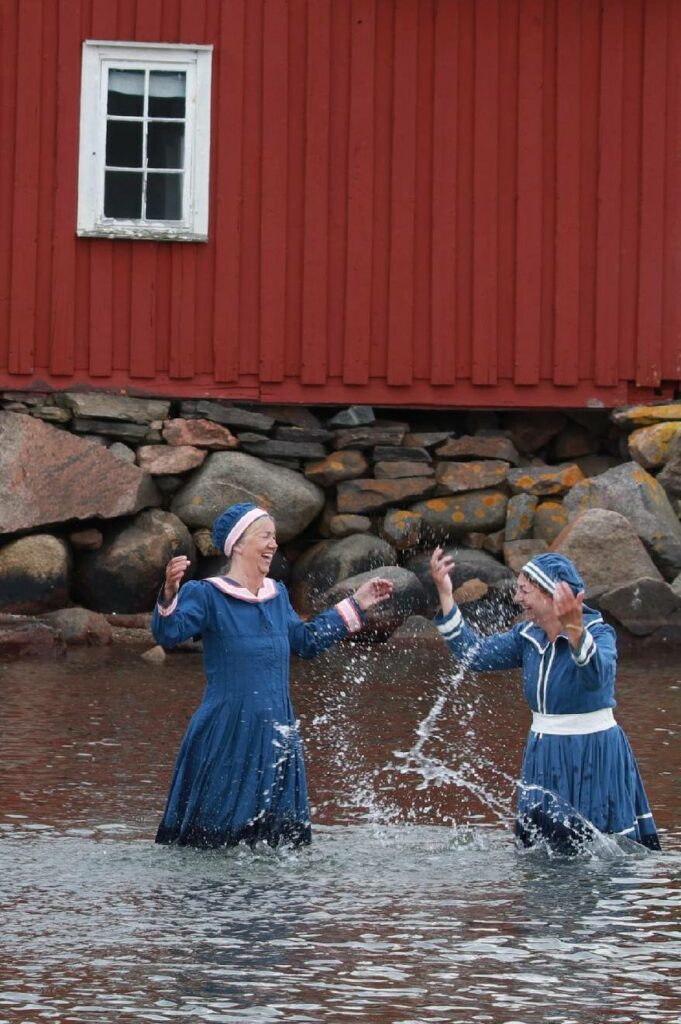 A couple of years ago, Kerstin and I made 1840s bathing costumes. At that time, I remembered a description of bathing costumes in an autobiography by a Swedish young woman. She had visited Charleston, South Carolina in 1854 and described them in a letter to her brother.

The other day, I found the book again: Travels in America 1851-1855 by Rosalie Roos (translated and edited by Carl L. Anderson).

Rosalie Roos was born in 1823, so she was 4 years older than Augusta. In 1851, she left Sweden for a teaching position at Limestone Springs Female High School, a boarding school in South Carolina.* She stayed at the school until the beginning of 1853 when she became the governess to two of her students on the Peronneau family plantation, Dungannon.

In the summer of 1854, the family vacationed in Charleston which she described in a letter to her brother Axel:

“I have another nice day to tell you about which was spent on Sullivan’s Island, just about the only summer resort which the city people have nearby. At 5 o’clock, good Mrs. Peronneau came to awaken me, and at 7 we were aboard the little steamboat which was to take us to the island.”

“The Company included Mrs. de Saussure with a couple of children, Clelia, Mary, and I. At the dock on Sullivan’s Island, we were met by old Mr. de Saussure, a little, portly, and prosperous-looking, exceedingly pleasant, and genial old fellow, in whose carriage we went to his residence and were welcomed there by his wife and two daughters. After breakfast, we sat on the piazza and I delighted in seeing and hearing the saltwater waves break against the fine sand of the shore just a few steps away from the house. Later we were invited to go out on ‘the beach,’ which at flood tide lies under water. Traveling across the white, fine-grained sand bar was especially pleasant, and we got down from the carriage to gather shells and seaweed which the waves had thrown up on the shore. Back at the house, we were invited to go bathing, which we accepted with pleasure.”

“One of the daughters let me borrow a bathing dress consisting of wide unmentionables and a jacket of red flannel, and a kind of coat of the same material to throw over my shoulders when descending into the water. Clelia and Mary received old bathing costumes of lesser elegance, and I assure you it was a droll sight to see us wandering off in this strange attire with old sunbonnets on our heads. In these bathing costumes, the women can quite freely enjoy bathing in the sea without being concerned about onlookers; they are excellent for this purpose, although I should not feel myself inclined to be dressed in this manner or to go bathing with gentlemen, although this is said to be quite usual.”

“It was glorious out in the water; it was thoroughly warm so that I did not feel one shiver when the first wave washed over me, and it was with difficulty that we could bring ourselves to leave the salty element after we had been in almost one hour. Later it tasted marvelous to eat watermelons, apples, pineapples, bananas, fresh figs, raisins, and almonds, along with lemonade – doesn’t it make your mouth water?”

Some American illustrations of bathing costumes in the 1800s: 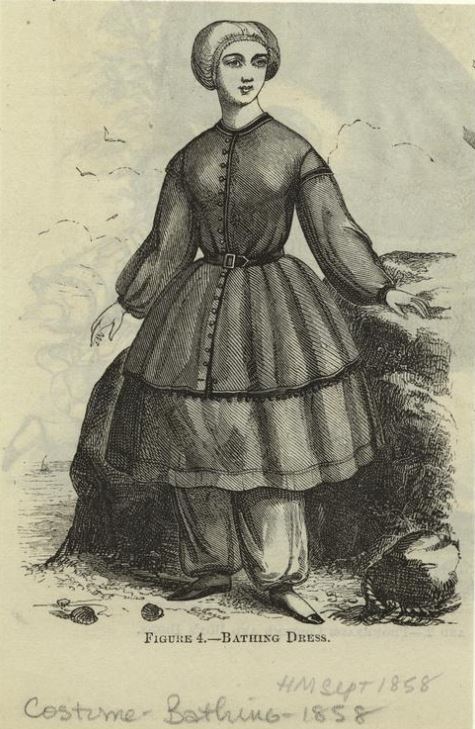 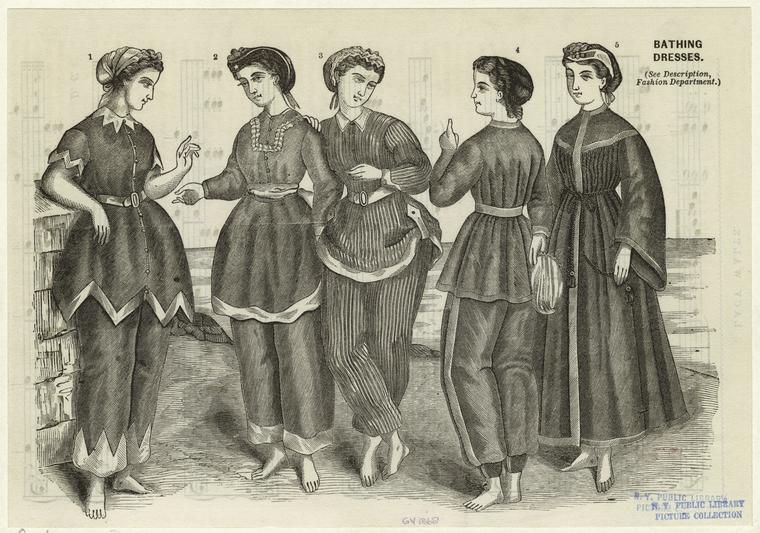 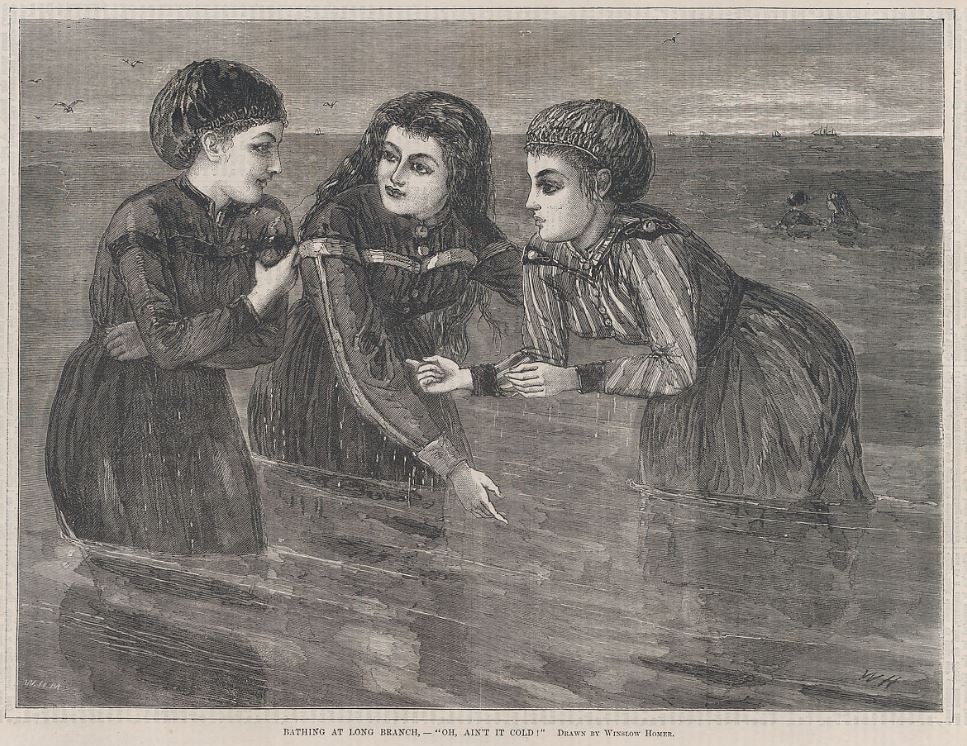 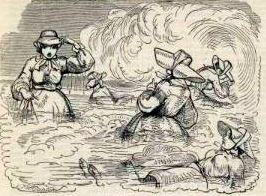 *“Originally named the Limestone Springs Female High School, the new institution attracted the daughters of the most influential families of South Carolina, who sought the finest liberal arts education available at that time. On November 6, 1845, a total of 67 young women began their classes at Limestone.” (https://www.limestone.edu/history-of-limestone)