Cecilia’s Album: Axelina Fries (Fock) – A lock of her hair

Cecilia’s Album: Axelina Fries (Fock) – A lock of her hair

Axeline Fries was 14 years old in May of 1844. When she sat down to write a card for Cecilia Koch’s memory album, she had already decided on her favorite poem. She knew it by heart.

(Literally translated as:
May new flowers adorn,
every day that greets you
Nothing lacking in your happiness
sanctified by friendship)

She made sure that her letters were perfectly lined up on the card and she underlined friendship (vänskapen).

But she wanted to give Cecilia something more and something personal.

A lock of her hair.

She gathered a few strands of her long, straight, brown hair and then, with her embroidery scissors, made the cut. She twisted the lock into two circles, like a pretzel, and tied it with a strand of red embroidery floss. 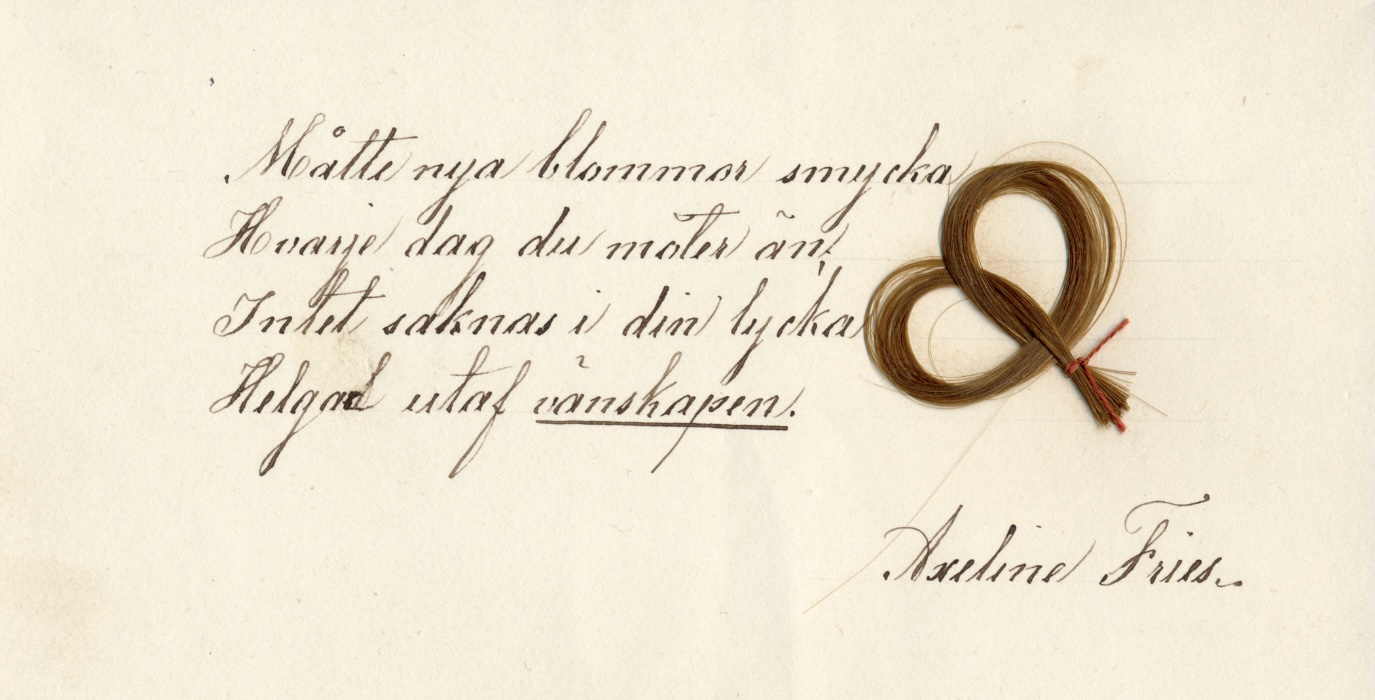 Two years later, her friend Cecilia died of measles and Axelina’s message would not bring any personal memories to those who read it. Now, 178 years later, I feel like I am finding a message in a bottle.

Who was Axelina? What did she look like? Did she marry? Did flowers adorn every day that greeted her?

Axelina was born in Malmö on September 5, 1829. Her father was Bengt Fredrik Fries (b. 1799), a professor of zoology who in 1831 became the curator of the Museum of Natural History in Stockholm. His wife, Axelina’s mother, was Anna Christina Lundberg (b. 1804). 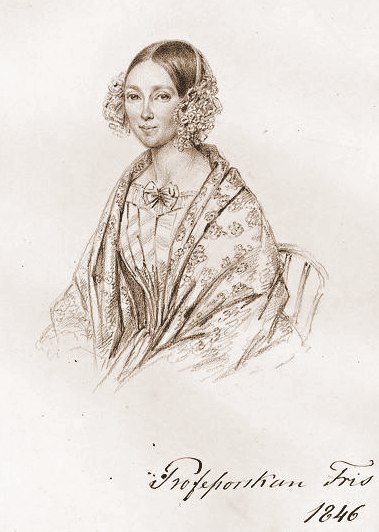 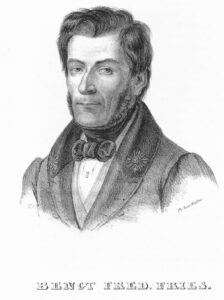 Axelina’s father died suddenly in 1839. In 1842, the family moved to Clara parish and to the house at the corner of Stora Vattugränd and Clara Östra Kyrkogata. It was the same house where Charlotta Lindström’s family lived (Charlotta, who also wrote a card for Cecilia’s album). The situations of the two families, Fries and Lindström, were similar. The fathers in both families were professors who had 3 young daughters when they suddenly died in their 30s. 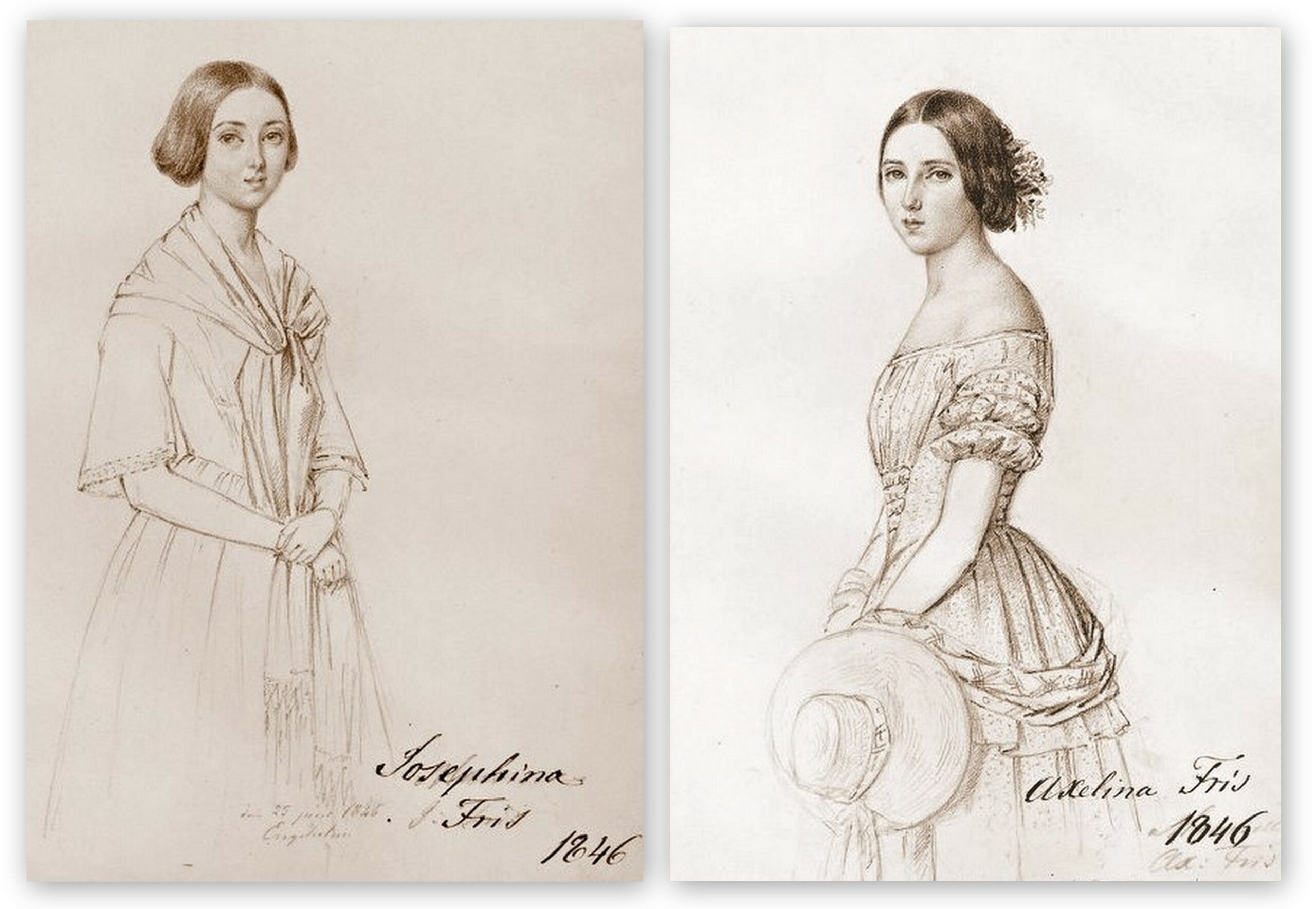 Josefina and Axelina Fries in 1846. Drawings by Maria Röhl.

“You probably already know that Axeline Fries is engaged to a Baron Fock, but they will not marry yet. He is awfully much smaller than her, it does not look very nice. When she takes his arm, he disappears right under her red coat.” (Lotten Westman’s letter to Augusta, March 6, 1848)

It was well known that Baron Alfred Henrik Edvard Fock was unusually short in stature. A friend of Alfred Fock, Fritz von Dardel, referred to him as “little Fock”.

“I had been asked to speak, but I instead persuaded little Fock to do it and he succeeded much better than I should have done.” (Fritz von Dardel describing a visit by industrialists and artists to thank Crown Prince Oscar for his support). 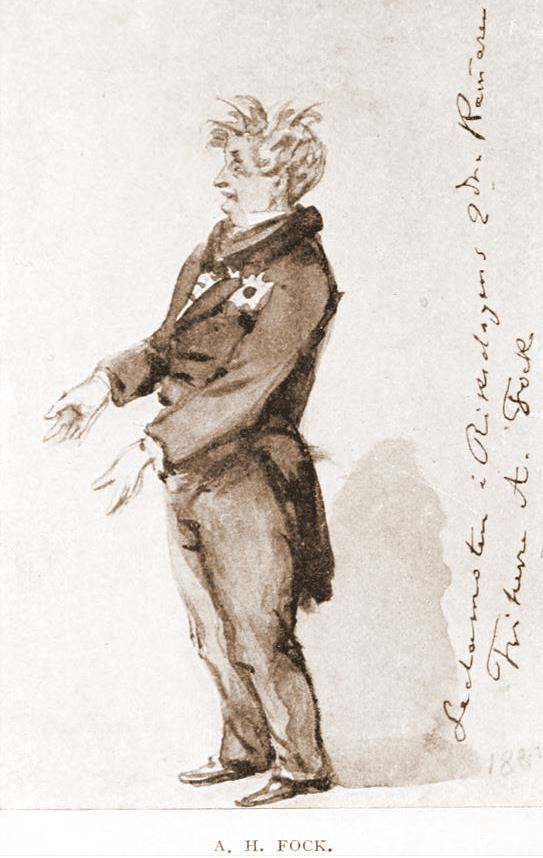 Alfred Fock was born in 1818 in Bjurbäck, close to Jönköping. When Axelina met him, he was a lieutenant and a teacher of physics in Stockholm. He would later leave the military and become a professor of physics at the Technology Institute in Stockholm; nowadays the KTH Royal Institute of Technology. He also became a member of parliament. 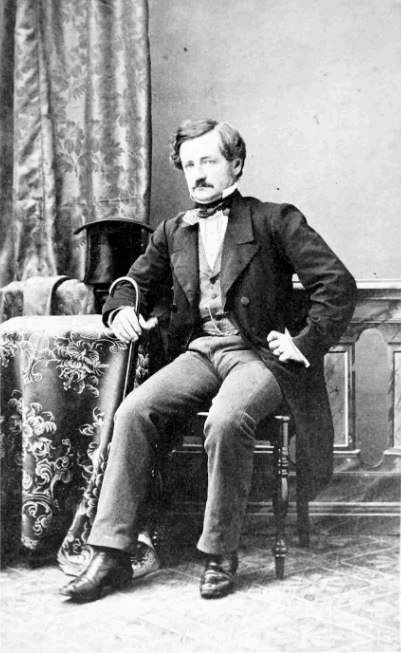 Axelina and Alfred got married on February 24, 1849. They had five children:

In the winter of 1858-59, Axelina and her two sisters visited Maria Röhl again. These are the artist’s quick sketches. She focused on the faces at these sessions.

A new home at Hantverkargatan 18, Kungsholmen

In 1851, the family moved to Hantverkargatan 18 (block Fikonträdet). They lived there until the end of the year 1856.

The address seems familiar, and in the house examination records, I recognize the names of Augusta’s childhood friends from Krusenhof in Kvillinge parish: the Hjort family. This is the house Augusta visited on her trips to Stockholm in the 1850s. And this is where she lived when she was ill with tuberculosis and was treated by Dr. Pehr Henrik Malmsten, a famous doctor in Stockholm. Augusta must have run into Axelina when she visited the Hjorts and when she stayed with them.

Augusta describes her visit to the Hjorts in her diary, March 12, 1851.

“The day after our arrival, we waded through quarter-deep dirt to our friends on Kungsholmen, where we were warmly received, had a pleasant evening and reminisced about our winter evenings at Krusenhof.

Aunt and Nanna have a small sunny and nice home, in the middle of a garden that extends all the way down to the lake shore. In the summer, this little place must be a real paradise where you have flowers and light, fresh air and Lake Mälaren’s blue surface and verdant islets to rest your eyes on, as well as the most magnificent views of Riddarholmen and Söder and, over all, the steamships that from different directions rush to their common goal – Riddarholmsbron.”

Axelina died on October 9, 1888, in Stockholm. That should probably be the end of this blog entry – one about a young, happy girl who wrote a lovely poem to her friend and gave her a lock of her hair.

But there are at least two of her grandchildren who should be mentioned. Axelina’s son, Carl Alexander, and his wife Huldina had 5 daughters: Fanny, Elsa, Mary, Carin, and Lilly.

My Memory of Axelina’s Granddaughter Mary

I actually have a memory of Axelina’s granddaughter.

I am around 5 years old and we are celebrating midsummer at Rockelstad Castle in Helgesta parish. I only remember two things: my parents dancing in a crowded place, and the old countess, who lived in the castle, giving me a large, shiny coin, maybe a 2-crown or 5-crown coin as a prize in a game organized for the kids. I curtsy politely as expected of me. It feels like a fairy tale, getting a shiny coin from an old countess who lives in a real castle.

Countess Mary von Rosen was Axelina’s granddaughter. She was born in 1886 and married Count Eric von Rosen (b.1879) in 1905. He was a pilot, an ethnographer, and the owner of Rockelstad Castle.

When I was a child, our family spent the summers at Ådö in Helgesta parish not far from Rockelstad Castle. There were lots of stories about Eric von Rosen, of his travels, parties, hunting trophies, etc. That is all I knew.

When I searched for Axelina’s granddaughters, I learned that Eric von Rosen died in 1948 and his wife in 1967. I guess she wasn’t as old as I thought she was when I was little.

Mary’s younger sister Carin married nazi-leader Hermann Göring in 1922. He was working as a commercial pilot in Stockholm after World War I and knew Eric von Rosen (also a pilot). Carin was visiting her sister Mary when she met Göring at Rockelstad. The couple moved to Germany in 1922 and became high-profile members of the nazi party. Carin died before World War II in 1931, at the age of 42, from a heart attack. Hermann Göring’s war crimes are well documented.

Axelina’s sisters Josefina and Ida never married.
The poem Axelina copied is an anonymous poem. It was published in a book in 1857.
All drawings by Maria Röhl are available at regina.kb.se