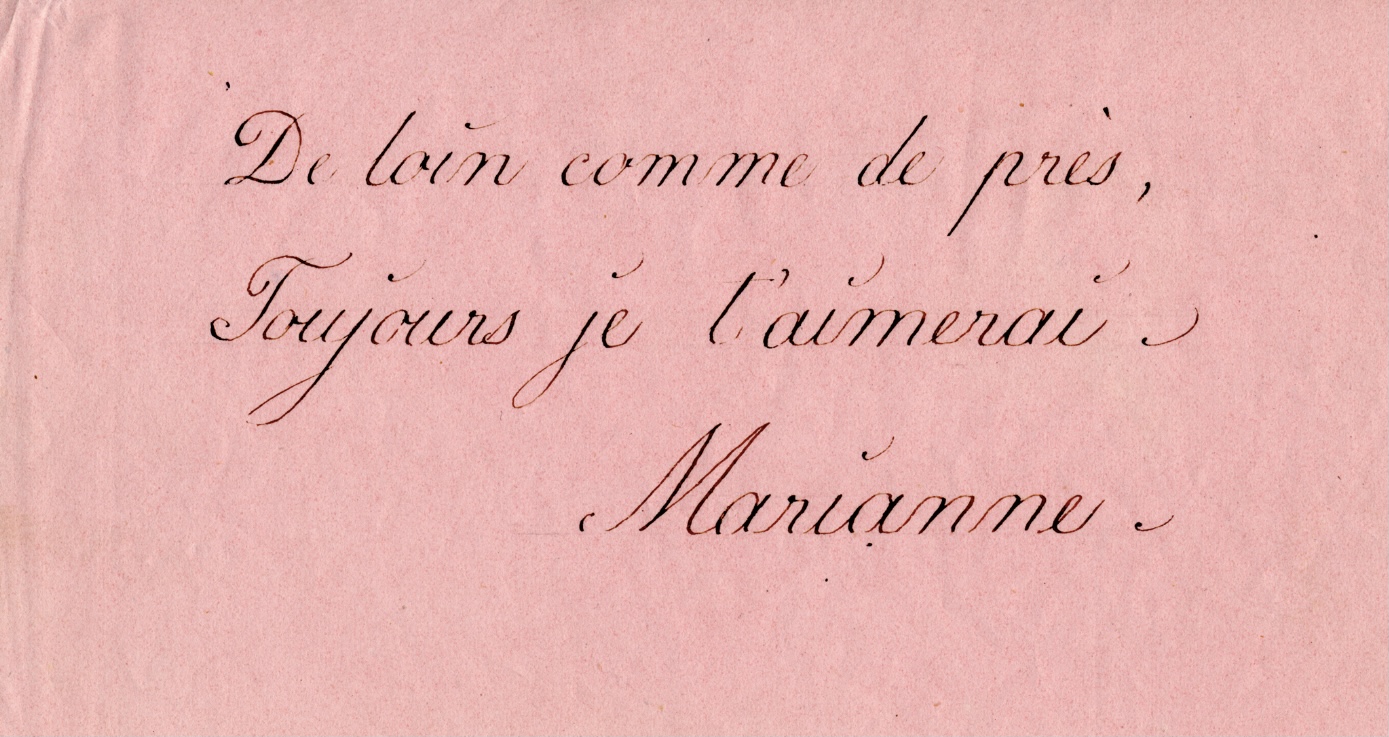 Afar or near
I always love you, Dear

Who was Marianne who wrote that short, sweet poem in French? The handwriting is impeccable. She didn’t include a last name or a date. Of course, with such an uncommon name in Sweden in the 1840s, there would have been no need to include a last name. Cecilia would have known who it was. But among Cecilia’s friends, there was no one named Marianne.

It wasn’t until I read a poem that someone had written for Cecilia’s funeral in 1846 that I saw the name, Marianne. One stanza of the poem read:

Shed no tears, grieving Father!
Forlorn mother, weep no more.
Among myriads of souls,
still, Cecilia smiles at you.
And in all the fates of life,
twin angels with each other,
follow you until death.
It’s her, and Marianne! 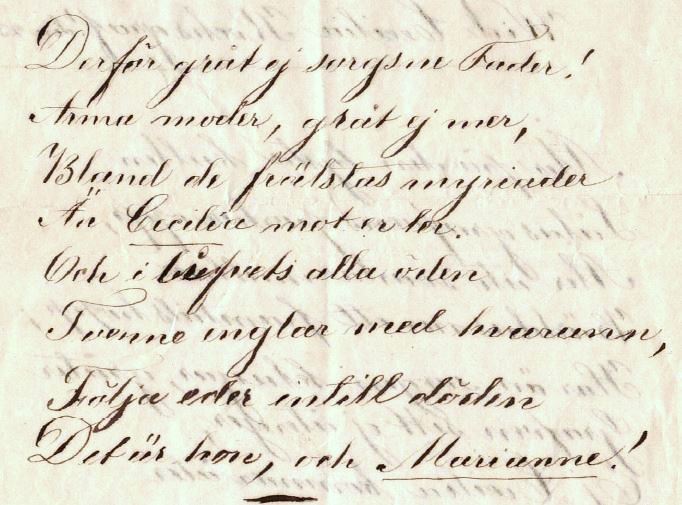 Cecilia was born in 1828, to Michael Koch (1792-1869) and his first wife, Johanna Amalia Fröding (1801-1830) on their estate, Vågsäter, north of Uddevalla on the Swedish west coast. Cecilia’s mother had died in childbirth in 1830, leaving her husband with 2-year-old Cecilia, a 1-year-old son, Carl Simzon, and a newborn baby, Michael.

As was common practice, Cecilia’s father remarried. He and his second wife, Emma Wilhelmina Iggeström (1809-1891), had 4 daughters and a son. The oldest of these children was Marianne, born at Vågsäter on April 15, 1834.

In the spring of 1844, Cecilia’s friends were writing poems for her memory album. She was just finishing her studies in Stockholm. Marianne was 10 years old and presumably being taught at home – maybe with her 9-year-old sister Clara. Her two older brothers and her 8-year-old brother Arthur had a private teacher who lived with the family.

And then there was little Ida, who was 3 years old and everyone’s favorite. But soon there would be one more baby in the house.

Bertha Isabella was born in March of 1845. By the summer, the little kids could play outside and it was so much easier to travel and visit family. Visiting a spa, like Gustafsberg, which was close enough to Vågsäter, was for those who wanted to socialize. This was the summer that our Augusta and some of her family members visited Gustafsberg. It was a good place to look for a suitable young man to marry. You can read about her visit here. Augusta didn’t keep a diary at this time so we don’t know if she and Cecilia met up.

In the fall, Augusta was back home, and Cecilia might have been staying with her former teachers, the Edgrens, at Morup parsonage. As winter approached, childhood diseases spread. In late November, scarlet fever was circulating and Marianne got ill. Was she the only one among the children who got a sore throat, fever, and headache? Marianne didn’t respond to any remedies they tried – trying to soothe her throat and lower her fever. She was seriously ill. On December 5, she succumbed to the disease. She was only 11 years old.

Marianne was buried in the Koch family cemetery on a peninsula by Vågsäter. In June last year, Kerstin and I visited the private cemetery. It was a beautiful day and a serene place. 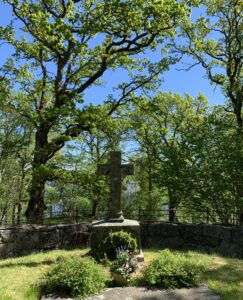 Cecilia was buried in the same private cemetery in October 1846. She died from measles at the age of 18.