There is only one wedding described in Augusta’s diary, the wedding of her cousin Carolina Schubert’s daughter Johanna (Hanna). Hanna was 2 years younger than Augusta and they were best friends. On August 7, 1851, Hanna married Count Lars Eric Georg Sparre. There are no descriptions of what the women wore and especially nothing about how the bride looked.

Given that Queen Victoria in 1840 had worn a white wedding dress, it is likely that the fashion in Sweden in 1851 also dictated a white dress. The pictures above are a few paintings from this time period of brides getting dressed.

“Hanna is married, but I will have to start at the beginning.

On the evening of the 6th of August, before the important day that would give Hanna the name, honor, and dignity of being a countess, her bridesmaids and the groomsmen were invited to merrily celebrate the last hours of her carefree time as a free woman.

I was the first to arrive. Shortly thereafter, Countess Sparre accompanied by her sister, an old dry and dull Mamsell, and two tall girls from Carlscrona, Miss Rappe and Mamsell Hjelm, both silent and inaccessible, arrived. Miss Ströberg, Mamsell Lenning, Rosa de Mare, Ada Sparre, and little Emelie Schubert were the other bridesmaids who, one after the other, made their entrance into the red parlor.

Soon, the groomsmen arrived. The first one to be presented was a Baron Rappe (cousin to the tall Miss Rappe) who displayed the forthright, trustworthy, and honest character that generally is associated with sailors and which makes you immediately comfortable and uninhibited in their company. Then followed a sharp-nosed Baron Falkenberg, a man I had previously met when he was a cadet. I think he was a little in love with Miss Rappe’s great merits as one always found him in her vicinity. Albert Schubert, the adventurer Ambjörn Sparre, Mr Victor Lenning, and the extraordinarily beautiful Baron Rehbinder were additional groomsmen. One of my Stockholm dance partners, Lieutenant Uggla, finished the lovable row of cavaliers.

After this short introduction, the dance began and continued until 10:30 in the evening without any particularly ingenuity and without any of us having made any advances in getting acquainted.

Thursday the 7th of August was the momentous day that would lead Hanna to a life of sorrow and despair or, with God’s grace, possibly to one with happiness and prosperity. Wållander officiated the ceremony in the most extraordinarily moving way; I think there was hardly any dry eye in the room. Weddings are all the same, a little monotonous and boring, but I had no reason to complain as my cavalier was a General.

The next day at breakfast, most of the wedding guests were assembled. General Boij and Lieutentant Colonel Tömgren conversed so diligently with me that they forgot to eat the stately breakfast. This gave rise to several sarcastic statements from the younger groomsmen, which I answered. My replies were not appreciated and made Baron Rappe my enemy. Baron Rehbinder and I, now at last, became a little more acquainted, but the two sailors and the two ladies from Carlscrona kept to themselves as peas in a pod and were impossible to form any closer acquaintance with.

I was asked to sing and I had to come forward to show my talent. It think it went reasonably well and I was thanked in the most flattering terms. The men sang a couple of quartets, very well, and finally we parted to get ready for the ball.

Twelve different uniforms swirled around the ballroom and offered a fairly lively view. The anticipation for the ball was high. As soon as I entered the hall I was asked to dance all the dances and, of course, I was not sad to feel so desirable. The ball lasted until 3:00 in the morning.” 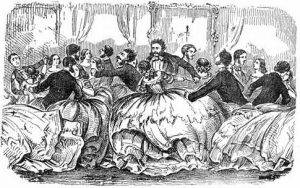