Kerstin and I are on standing on the deck of S/S Bohuslän, the steamer that will take us on the same journey that Augusta and her family made in July of 1850 – from Gothenburg to Strömstad. It is a beautiful day – no clouds in the sky and a slight sea breeze. We are not alone enjoying this day out at sea. We wave to families in sailboats and small yachts and they wave back. Even people onshore wave as we pass by because S/S Bohuslän is such a beautiful and historic steamer. 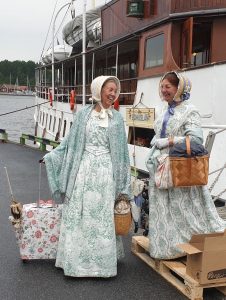 Our 2019 summer sejour: A cruise with S/S Bohuslän from Gothenburg to Strömstad. Augusta made the same journey in 1850 onboard S/S Freja. (Picture credit: Gunilla Rietz).

In the distance, we suddenly discern the island of Marstrand. This is and has been since the 1850s, Sweden’s most fashionable sea resort. So when Augusta visited Marstrand, it should not have come as a surprise that she met several of her wealthy friends from Stockholm

“At Marstrand, where the steamboat stopped for a short time, I met several Stockholm acquaintances, including Augusta Holmqvist and Lieutenant Claes Bergenstråhle.” (Augusta’s diary, July 1850). 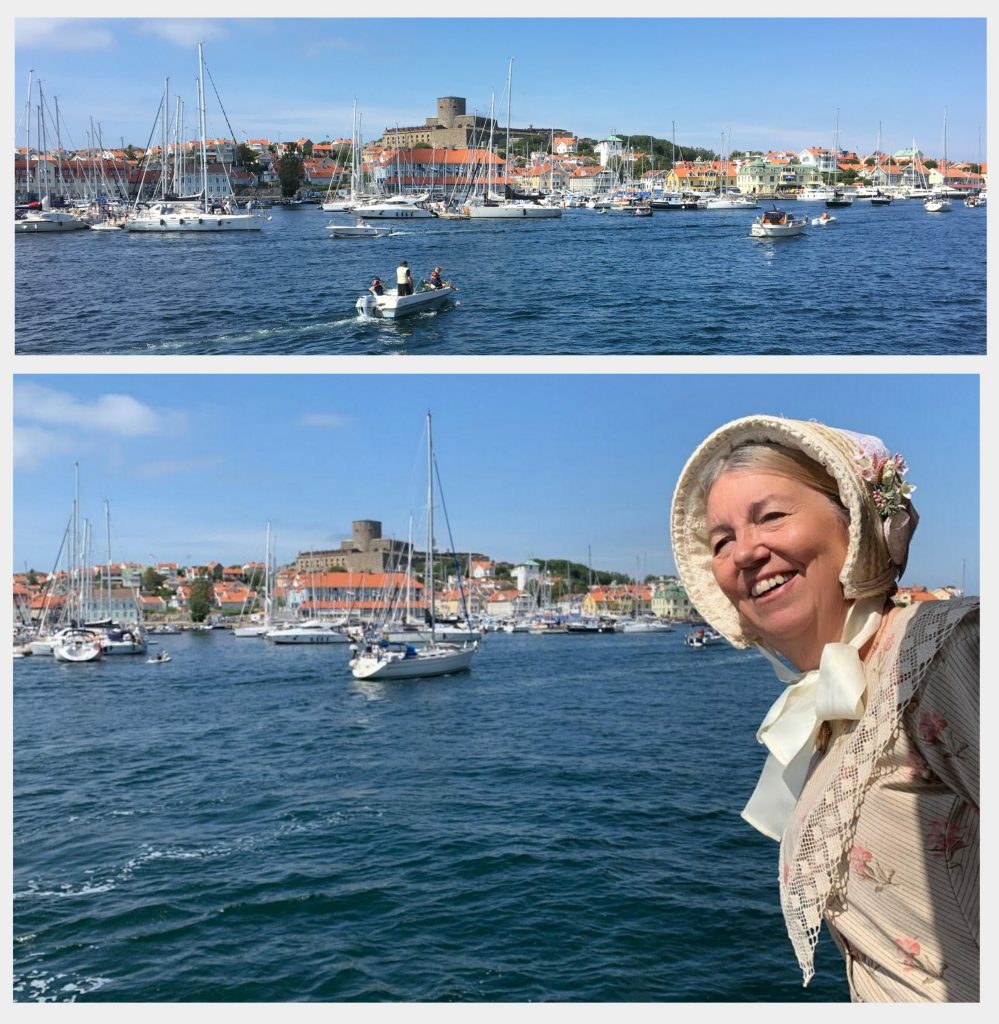 Getting close to Marstrand

As we get close to Marstrand with its myriad of boats and people, I try to imagine what the small town would have looked like 170 years ago. What did the wealthy visitors from Stockholm do during their visit to Marstrand? How did they live and how did they entertain themselves?

John Arsenius (1818-1903) was a military man. He was also a professional oil painter, specializing in painting horses. Arsenius was staying in Marstrand in July 1850 with several of his Uppsala University friends. In his autobiography, he writes about this fun and memorable summer sejour. The amazing coincidence is that he was there when Augusta visited Marstrand. Did they have friends in common?

Yes, they did, because he mentions his friends by name. He writes about Augusta’s friend, Augusta Holmqvist (who I wrote about in an earlier blog) and Count Figge von Schwerin who Augusta describes in her diary the following year:

…in the evening we saw the great opera, “A Tale of the Queen of Navarre.” There I met Count Figge Schwerin who escorted me home and was quite himself, much disposed to let his lady alone carry on the conversation and himself look like he was sleepwalking. (Augusta’s diary, Stockholm 12 March 1851)

And then there is a Baron Rehbinder, who could be the same person Augusta describes in her diary in 1851 as the “the extremely beautiful Baron Rehbinder” with whom she is secretly enamored.

So, what did they all do to entertain themselves in Marstrand? 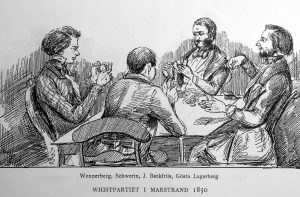 Arsenius describes boat rides, mention picnics, and vividly describes the card games, drinking parties, and the singing. Leading the singing is the famous songwriter and composer, Gunnar Wennerberg. Julius Günther, the famous Swedish tenor, is also in Marstrand to rest his voice (he also figured in a previous blog about Augusta).

In addition to all these activities, the group of friends decides to organize a play. After the dress rehearsal, they are in such a good mood that the 14 members of the cast imbibe 30 bottles of wine or porter with their dinner. They are a little worried about their first performance which is scheduled shortly after dinner. But the play is a success and it inspires them to set up two more plays. 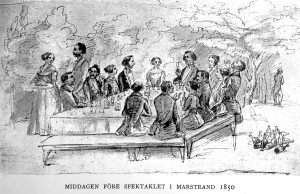 The dinner before the opening night. Notice the pile of bottles in the corner. 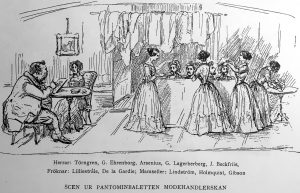 The play: Four young women working in a fashion store get a surprise visit by their lovers. In order to hide them, they pretend their heads are wig blocks and continue to work on their heads as if they were working on wigs. One of the lovers takes care of the old owner of the store and flatter her by drawing her portrait.

Entertainment, then and now…

As we pass Marstrand, I look back at where the old clubhouse (Swedish: societetshus) would have stood (and which is now replaced by another clubhouse from 1887) and the park surrounding it. This is where they would have had their parties, plays, and picnics and Augusta would have walked there in her summer dress under a silk parasol. 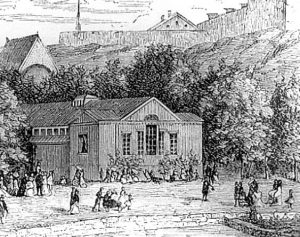 The old club house (societetshuset) that was built in the 1840s.

But if Augusta was in Marstrand today, what would she be doing?

Two girls on a jet ski catch my eye. They weave in and out of the wake from our boat, excited as they jump the waves. Yes, Augusta could be one of them. And Arsenius and Rehbinder might be the two guys who race the girls on their own fast jet ski…..