He had found them!

Half an hour earlier, the archivist at Stockholm City Archives had told me that the family Edholm’s archive took up several yards of shelf-space and with the diaries not specifically cataloged, I could look forward to spending weeks looking through boxes of random family memorabilia. The diaries would probably be in one of those boxes.

“Can you please check if there is anything on those shelves that would indicate that the materials should have been sealed until the year 2000,” I ask the helpful guy who is carting up boxes from the vaults below.

Maybe the diaries were boxed separately since they were not to be read until the year 2000?

“Maybe there is something written on a box that would indicate that? I could come with you and help you look,” I suggest with a smile.

And now, half an hour later, he has found them! Two boxes, tied with strong brown string, containing the diaries I had been looking for.

Did Augusta really socialize with Erik af Edholm? Who else did?

I probably need to explain my quest for these elusive diaries.

It all goes back to Augusta’s admirers; that is, admirers according to her best friend Lotten Westman.

“I saw all your admirers at Gunther’s concert last Tuesday – Bergenstråhle, Löwegren, Edholm, etc, etc., as I believe there is a multitude of them.”
(Lotten to Augusta, Stockholm, October 1845)

But how would I know if Augusta really socialized with them? Could that be corroborated by other sources? Would they figure in other published diaries from the same time period?

The answer is yes, at least with regards to Erik af Edholm. Maybe because he seemed to have been very social and well-liked.

My first source is Marie-Louise Forsell, a contemporary, well-connected, young woman who kept diaries which were published posthumously. She writes about Erik who she met at Holmqvist’s ball:

“Lieutenant Edholm really liked our dark-grey silk gowns and he was the only new one with whom we danced.” (27 March 1843)

Additionally, two sisters, Lotten and Edla Ulrich, whose diaries were recently published by Margareta Östman, also write about Erik. But their description of him is that of a friend or a brother as the two families were close friends. Eric af Edholm’s father was King Carl XIV Johan’s private doctor. The father of Lotten and Edla was the King’s private secretary. Both families lived in the royal palace and the Ulrich and af Edholm children grew up together. 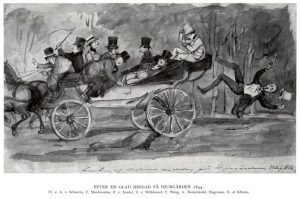 After a happy dinner at Djurgården 13 August 1844. Erik af Edholm is the fellow falling off the carriage. Drawing by F. Dardel.

In 1944, Erik’s son published selected parts of the diaries from the time period 1840-1859 in a book called “Svunna Dagar” (Days Gone By). The book is fascinating. Every year, from January through March, there were balls. Some weeks, Erik was invited to private balls every day. With a sense of humor and sometimes self-sarcasm, he describes his social life. But he also describes, always in positive ways, his dance partners. One particular favorite was Mathilda Horn, whose father was the governor of the province of Stockholm (Landshövding):

“Miss Mathilda was charming in a white dress with a collar of lace tied around her delicate neck with an enviable blue ribbon. The hair framed her beautiful forehead with long, brown curls and her eyes shone with tenderness and goodness.” (17 January 1843)

Now, if Erik knew Augusta and they went to the same balls, would he have written anything about her? That was what I wanted to know. 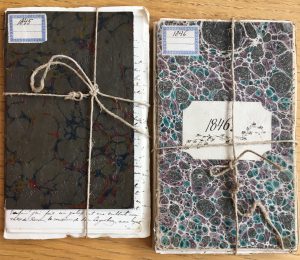 With white cotton gloves, I open the box of diaries from 1843-1848. Inside the box are small bound notebooks. I open the diary for 1845. That is when Augusta was 18. She later described how happy she was that year, dancing to Strauss waltzes and forgetting everything else around her.

The diary is written in cursive with an ink pen. The font size, if it had existed, would be a 6. That is pretty hard to read! The best strategy is to take pictures with my iPhone and then look at the images on my computer screen when I get home.

In addition, the diary is written in French! 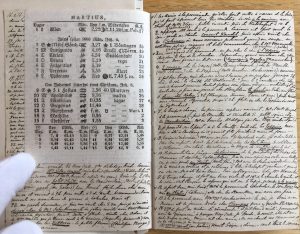 A typical page in the diary.

It will take some time to go through all the images of Erik’s diaries. And some brushing up of my French.  At least, the penmanship is good.

But I check one thing. Did Erik attend Gunther’s concert that Lotten wrote about in her letter?

And to corroborate that, I read the Stockholm newspaper that reported on the concert. It was a farewell concert by the famous Swedish tenor, Julius Günther, who often sang together with Jenny Lind. Julius Günther was to move to Paris. The concert drew a crowd of over 1000 and was very well received.