I have continued to read the correspondence between Augusta and Lotten Westman from 1845. In the earliest letters, they decide to write each other monthly, but sometimes they write even twice a month. The letters give a glimpse of the concerns of 18-year-old girls who have just finished their education and now have to be content with home life, social life, and prospects of marriage. They would have loved social media; instead, they write letters to exchange gossip about friends, eligible lieutenants, and family members – in that order.

Heartfelt thanks for your last dear letter, you can hardly believe how happy I got and how much I have laughed…

Oh how fun it would be if you would come here this spring, but I would probably only catch a glimpse of you for all your other acquaintances. But if I were to abduct you, I would at least see you sometime. One can never meet Emilia Breitholtz at home because she is always at the Bohemans….

Augusta writes about the Boheman family in her diary. The head of the family was Professor Carl Henrik Boheman, in charge of the entomology collections at the Museum of Natural History in Stockholm. In 1845 the household consisted of Carl Henrik, his wife Amalia Åberg and her elderly mother, and their 4 children: Hildegard (b. 1826), Hildur (b. 1829), Carl Hjalmar (b. 1834), and Ernst Hindrik Georg (b. 1836).

Augusta, Lotten, Hildegard, and Hildur were all close friends – in addition to Emilia Breitholtz.

Emilia’s full name was Emilia Bernhardina Breitholtz. She was born in Stockholm in 1826, so she was the same age as Hildegard Boheman. Her mother, Emilie Hästesko-Fortuna, was a widow and lived with her children on Holländargatan, close to the Hay Market. Today, the google map street-view of the location is a parking garage. 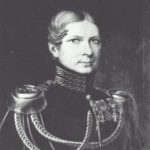 Emilia’s father was Claes Josef Breitholtz, an officer who participated in the Finish War of 1808-1809 and the Napoleonic wars. Maybe he knew Augusta’s father?

Emilia’s brothers also became officers. But what about Emelia? The only thing I can find about her is that she did not marry, that she died in Waxholm in 1891, and that she is buried in the family grave in Solna. What did she do? Did she teach? Maybe she kept a diary; maybe she wrote letters? Maybe some family member still have them? Or are they somewhere in the large Breitholtz family archive at the Royal Library? At least there is a picture of her later in life.

The search goes on. There are more names to follow in Augusta and Lotten’s correspondence and more stories about forgotten lives.

One response to “Who was Emilia Breitholtz?”