Mrs Edgren and her School for Girls

Mrs Edgren and her School for Girls

“Lucky Augusta who gets letters from Mrs. Edgren! Greet her a thousand times from me. Tell her that I still worship her as warmly as when I said goodbye to her for the last time, and when I start talking about them, it is always an inexhaustible topic and at those times, I forget both time and place and it takes me back to the happy times when I was educated by them; when a smile and a friendly word by Mrs Edgren sent me to the seventh heaven. Tell her all this, and say that if in the future, whether I get ever so happy or unhappy, I will never forget them. Oh, when I just think of them, I get overly joyous.”

In the fall of 1845, Lotten and Augusta are discussing their previous teacher, Mrs Edgren. Both girls have finished their education and now keep in touch by writing letters. Many letters mention Mrs Edgren. At what school did she teach?

Googling Mrs Edgren (Swedish: Fru Edgren) doesn’t help. There was another famous Mrs Edgren in Stockholm in the latter half of the 1800s (see footnote), but she was younger than Augusta. And no Mrs Edgren shows up in searches in city or national archives. It is frustrating – I know she existed, but there is no record of her.

This is where creative thinking might help. Why was a married woman a teacher? A married woman might only have resorted to teaching if she was a widow. And her husband must have belonged to the upper class if his wife was educated enough to teach in a private school. Could he have been an officer in the army? That could explain Augusta’s family’s connection with the Edgrens. My search has to widen.

Two nights in a row, I read everything I can find about Edgren families in Sweden – genealogy discussion groups and the like. The second night, my search takes me to a digitized book about Swedish families, published in the 1800s, with genealogy of a family Edgren from Åmål, Sweden. I read about the sons, Johan Fredrik and Per Adolph, who were educated in Uppsala. Suddenly, in the middle of the page about Johan Fredrik’s life, I read the following:

“Pastor Edgren … started in 1838, together with his wife, a larger, very famous educational institute for girls in Stockholm; was, according to the speech at his funeral, an accomplished man of the world and one of the diocese’s, not to mention the country’s, most educated priests.”

I have found Mrs. Edgren!!!

It is past midnight and I have to get a glass of wine to celebrate this victory and to slowly read all the details I can now find about Mrs. Edgren. 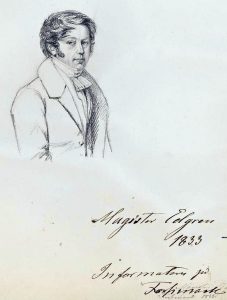 Now I dive into church records, digitized newspapers from 1838 – 1844, and archives of building permits.

Pastor Johan Fredrik Edgren was born in Åmål in 1797, studied in Uppsala and got is his PhD in 1827. He then became a pastor in Stockholm and a private teacher in the af Ugglas family at Forsmark. In 1832, he became a chaplain in the army’s “Andra Lifgardet”.

On 20 August 1838, the following ad was placed in the newspaper Daglig Allehanda:

At the beginning of October, the undersigned aim to open an educational institute for a small number of girls, where teaching will take place from 8:30 am to 1:30 pm in Science, Languages, and Drawing, and during two days a week, from 3 pm to 5 pm in handicrafts. The tuition is 80 Rdr or 100 Rdr Banko for a year. The location is Stora Vattugränden. 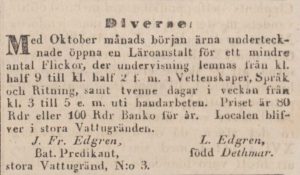 In 1842, the address of the Edgrens, and presumably their school, is House No. 12, Stora Wattugränd – close to Clara Church. 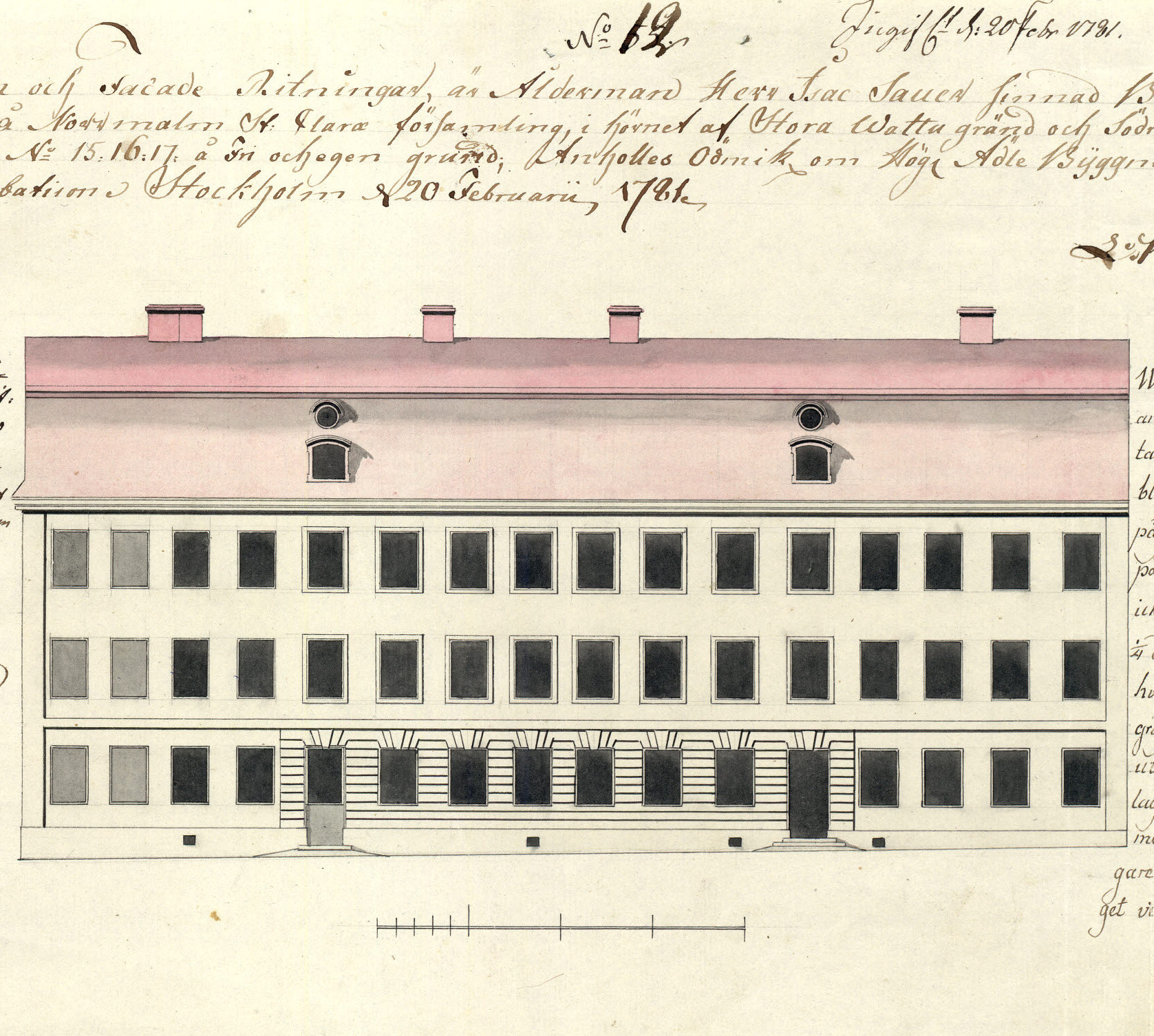 Augusta started school in the fall of 1841. One could presume that this is the school she attended until the summer of 1844.

In February of 1844, there was an official bulletin in the daily papers announcing the appointment of Pastor Edgren to vicar at Morup’s parish in the province of Halland. That meant, they had to close the school and move from Stockholm to the west coast of Sweden. I search Morup’s church records and find that they were registered as becoming members of the parish on 1 July 1844.

And that put’s Augusta’s mother’s letter of 23 March 1844 in a new light. She was probably searching for a new school and new lodging for Augusta if she was to continue her education in Stockholm in the fall of 1844 (which she did):

“My beloved child, I have now written to Mrs Edgren and asked her where and with whom I shall let you stay; we will see if she knows a suitable place for you if you need to remain [in Stockholm]. It is truly a great sacrifice of me to let you stay up there for another year, I need you so much at home.

… It would be helpful and fun for both of you if Cecilia Kock made sure that she came to the same place as you – tell her that. Now ask Mrs. Edgren to find a good place for you and I will take care of the agreement when I come up. By the way, ask how much Miss Hellberg* charges and find out what kind of person she is and with what kind of people she socializes, and if she can bring out into society those in her charge. It is very important to find a place that has a good reputation and where people are known for their honorable character. If you can find a place where they daily speak a foreign language, that would be good for you. Tell Mrs Edgren that. If she knows of such a family and they could take you in, that would be very good. I think she knows many foreign families.

… Write to me soon and tell me what you know, also what Mrs. Edgren has said about you remaining in Stockholm, if she thinks that’s what you should do. On Wednesday, I sent you your black everyday dress – I hope you have picked up the package. I hope you like it. There were also a pair of black silk gloves.

God bless you my own child and make you as happy as your mother wishes.”

*Lotten was living with Miss Hellberg.

In November 1844, we know that Augusta is still studying in Stockholm and is now living with the family of Baroness Jaquette Ribbing. Not a foreign family but certainly one that met all the other wishes regarding reputation, character, and high society.

There are no records of her schooling from this time, but based on correspondence, it seems like she studied in Stockholm through the spring of 1845.

Another school to find!

What happened to Mrs Edgren and her family?

The Edgren family consisted of Mr and Mrs Edgren and their 3 children:

Mrs Edgren died 30 January 1853, at the age of 50, from ”chest sickness.” That was a term used for anything related to pain in the chest. Her grave at Morup has two marble tombstones – an urn and a broken column which symbolizes a life that was cut short.

There is a much more famous Mrs Edgren: Anna Charlotta Edgren (1849-1892), born Leffler. Anna Charlotta and her 3 brothers grew up in an intellectual home in Stockholm. Their father, Johan Olof Leffler, PhD from Uppsala, became a teacher and principal of boy schools in Stockholm. Anna Charlotta got her early education at the Wallin School, married Gustaf Elias Edgren, and became a famous writer. She later divorced him and married an Italian mathematician. Her oldest brother, Gösta Mittag-Leffler, became the first professor of mathematics at Stockholms Högskola (which later became Stockholm University) and started the Institute Mittag-Leffler.

3 responses to “Mrs Edgren and her School for Girls”