13. Augusta Sjöstedt and her sister Ophalia

13. Augusta Sjöstedt and her sister Ophalia

In May of 1844, Pastor Petterson listed Augusta Sjöstedt as number 13 of the girls who got confirmed in St Jacob’s church. The ranking was based on his perception of the girl’s social status, based on her last name and her father’s profession. Augusta Sjöstedt did not belong to the nobility but her father, Jacob Sjöstedt, was a wealthy brewer.

The first time I heard of Augusta Sjöstedt was in a letter from Lotten Westman to “our” Augusta (Augusta Söderholm). Lotten was making sure that her friend did not miss out on any gossip from Stockholm.

“Do you know, I find Augusta Sjöstedt just as boring now as when she sat in school with open mouth and read German verses, do you remember that? And how her legs were always in my way? But it was a fun time!“ (Lotten’s letter to Augusta, Stockholm, May 6, 1846)

The school she was reminiscing about was Mrs. Edgren’s school close to St Clara church in Stockholm. Our Augusta, Lotten Westman, and Augusta Sjöstedt were classmates. In 1844, the school closed and many of the students transferred to Mlle. Frigel’s school.

Jacob Sjöstedt was a wealthy brewer in Stockholm. Augusta Sjöstedt was the baby in the family. She had 3 older sisters and 3 older brothers. The family was well off. That was important because, in order for the girls to marry well, there had to be some investments in their education and their social life.

Fortunately, the two eldest daughters, Lowisa Carolina and Sofia Maria Ottiliana had already married by the time Augusta and her older sister Ophalia were making their debut in society. Now the family only had to focus on these two daughters. Well, there was also another girl living in the household. The family hosted a girl from a small town. Her story is chronicled in a previous blog post as her daughter became a famous writer who won the Nobel Prize in literature.

Attending a private school and going to balls were part of the girls’ upbringing. To be seen and to socialize was important. Ophalia must have been ecstatic when, at the New Year’s Ball in 1850, one of the royal princes (later to become King Oscar II) asked her to dance the first waltz. The write-up, in Swedish of course, of the entire event can be found here. 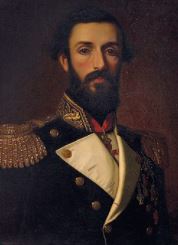 But besides education and being seen in public, it was also important to be able to sing and play the piano. Most of the girls, including our Augusta and her friend Lotten, took singing lessons. And Augusta Sjöstedt played the piano

And then, if you could afford it, you could commission an oil painting of your daughter. Imagine your friends and acquaintances coming over to see the portrait! Of course, your daughter would be wearing her finest dress, maybe a shawl thrown over the chair, and why not, seated by her piano forte.

I don’t remember how I was searching, in what database and with what search words, but up popped the portrait of Augusta Sjöstedt! So lovely, in a beautiful pink silk dress. The portrait was bequeathed to the Nordic Museum in Stockholm in 1938 by her daughter.

But what about Ophalia. Wouldn’t she also have had a portrait? All I could find was a small image of her that looks like it was cropped from a larger painting.

Well, it all paid off. Both Ophalia and Augusta Sjöstedt married in 1850. And both married officers of noble families.

Ophalia married Georg Julius von Axelson on the 13th of February. She and her husband had 4 daughters and 1 son.

Augusta married Adam Henrik Carlheim Gyllensköld on the 26th of September 1850 and moved to his home, Vederslöv, close to Växsjö. 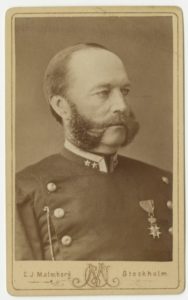 Over the next 13 years, they had 6 daughters: Alma, Berta, Valborg, Ingeborg, Cecilia, and Sigrid. The youngest, Sigrid, born in 1863, became a famous pianist. She studied at the music conservatory in Stockholm, then in Dresden, followed by Vienna. In 1889, she started a music institute in Stockholm. 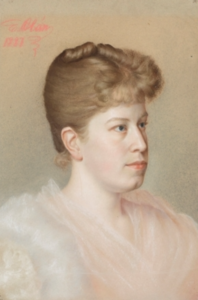