In Search of Dora and Finding Dorothea Plagemann

In Search of Dora and Finding Dorothea Plagemann

My own, beloved Augusta!

You know what? I have not yet received a letter from Dora since I wrote you last. I’m really worried. Imagine my delight; she will come here this summer. She will also travel with her mother to Nora to a married sister she has there. Mormor (Swedish: mother’s mother) is going to take water because she has been ill throughout the winter. I am supposed to be invited by Moster (Swedish: mother’s sister) to come there, but although I love Dora so much and how fun it would be, it would be impossible for me to stay away from home for so long without getting homesick. I would rather be at my beloved Ulriksdal for a few days. My aunt and uncle live there. There, I really enjoy the summer. It is so private with the lake close by. I can lay down in a boat by the shore and rock gently with the waves. I don’t know anything as monotonous, but also nothing more wonderful on a bright, sunny day than to lie in a boat by the shore and hear the sound of the waves rhythmically break against the shore. It’s a lovely song in my ears. I’ve never liked the countryside before, but now I love it and suffer in the city during the summer.

The original letter from Lotten regarding Dora.

This is Charlotte Westman’s first letter to Augusta in 1846. As usual, she talks about Dora and how Dora will be traveling to the small Swedish town, Nora. But Dora is never mentioned with a family name, so how could one ever find out who she is?

The paragraph in this letter is pretty confusing. Right after discussing Dora, Lotten mentions a maternal grandmother who has been sick and needs to drink water from the spring in Nora. Is it Dora’s grandmother or Lotten’s? I decide to at least find out who Lotten’s grandmother was.

Lotten’s maternal grandmother was Hedvig Charlotta Åslund (1776-1816) from Ovanåker, Folkärna parish, close to Avesta. She was married to a famous pharmacist, Carl Johan Fredrik (CJF) Plagemann (1779-1864). She died in an explosion while making silver fulminate when she was 40 years old. Maybe she was helping her husband in his laboratory? 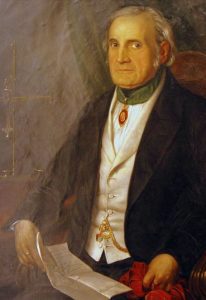 The following year, CJF Plagemann opened a pharmacy in the Westman Palace in Stockholm. A requirement for opening his own pharmacy was that he should also teach pharmacy students. The activities should be conducted under the supervision of a professor of chemistry, Jacob Berzelius.

When CJF Plagemann’s wife died, she left behind four children between the ages of 3 and 11. One of those children was Lotten’s mother, Eva Charlotte (1807-1840, married into the Westman family). So Lotten’s maternal grandmother died long before Lotten was born. As was customary at the time, the widower then married his first wife’s younger sister, Eva Sofia Åslund (1785-1853). Lotten, therefore, had a step-grandmother who was also her great aunt. Did she refer to her as Mormor or Moster?

And here comes the interesting observation. Her grandfather and his new wife had a child, a daughter born in 1826 – thus a year older than Lotten – by the name of Dorothea, or Dora. Could it be the Dora? 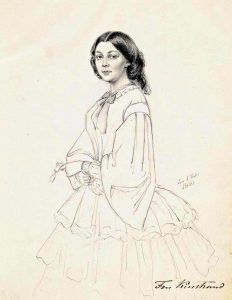 Eva Dorothea Fredrika Charlotta Plagemann spent her childhood in Stockholm. During this time, her father expanded his pharmaceutical business to include manufacturing of chemical products. Raw materials necessary for the manufacturing were abundant in northern Sweden, so in 1833, CJF Plagemann moved to Skellefteå and from there, in 1843, to Umeå. Did Dorothea move with her parents or did she stay behind in Stockholm, boarding with some family and attending school? All we know is that she had her first communion in Klara parish in Stockholm in 1843, a year before Lotten. Most likely, she stayed in Stockholm for at least some of those years. Maybe she also attended Mrs. Edgren’s school?

On the 19 August 1851, Dorothea married pharmacist Fabian Reinhold Kindstrand, a colleague of her father. In documents from the time she goes by several combinations of names and spellings, e.g., Dorothée Kindstrand and Dorothea Plagemann.

Is it Dora in Nora?

I don’t know if Dorothea is Dora who Lotten refers to in her letters. I haven’t found any connections yet between Dorothea and the town of Nora. Dorothea’s mother had many sisters, so when Lotten writes that Dora “…will also travel with her mother to Nora to a married sister she has there”, could she possibly mean a sister of her mother? I might find out more, as I have many more of Lotten’s letters to read.

There were more clues in Lotten’s later letters.

So, Lotten’s maternal aunt in Nora was named Anna. I search on Anna and Nora and Plagemann and get nowhere. Then I simplify the search to just Nora+Plagemann and land in a book about Swedish families published in 1906. And there it is – Anna Sofia Plagemann married to Adolf Fredrik Baer, living in Nora. So Dorothea Plagemann had a married sister living in Nora, by the name of Anna.

In a later letter, Lotten, for the first time, mentions her maternal grandfather – not by name, but the fact that he came to visit. Makes me wonder if she corresponded with him? Dora did – but that was her father, not her grandfather.

“…I was fully convinced I would meet Dora. The day of her arrival was already determined and we were expecting her. Then Morfar (Swedish: mother’s father) came alone, because Momor (Swedish: mother’s mother) had again fallen and had a fracture and, therefore, they could not travel.”

In the next paragraph, Lotten complains about all that she has to do.

“Today, as well, letters and packages must be sealed and sent to Umeå.”

And it was in Umeå that CJF Plagemann and his wife lived. Did Dora also live there in 1845-1846 and only spent the summers in Nora?

I think it is safe to conclude that Dora in Lotten’s letters is Dorothea Plagemann and that Dora visited her aunt Anna in Nora. 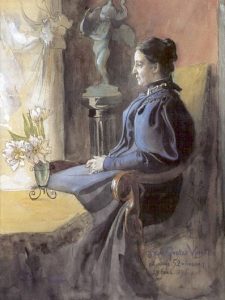 When searching for images of Dorothea, I found some beautiful paintings by the famous Swedish artist, Carl Larsson. What did they have to do with Dorothea? The first one happened to be of Dorothea’s daughter. Eva Dorothea Helena Kindstrand was born in 1852 and is better known by her married name, Eva Upmark. She held many positions in organizations for women. She was the chairperson of the Swedish Women’s Confederation and the secretary of the Red Cross Women’s Association. In 1911, she organized the International Congress of the International Council of Women. 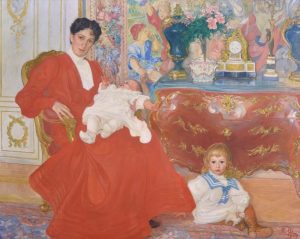 Eva Upmark also had a daughter. Her name was Dora. And Carl Larsson painted her too – a large painting of Dora Lamm with her sons and another one of her reading. 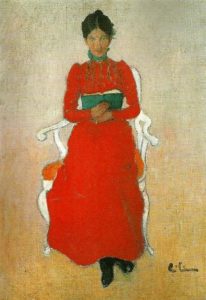