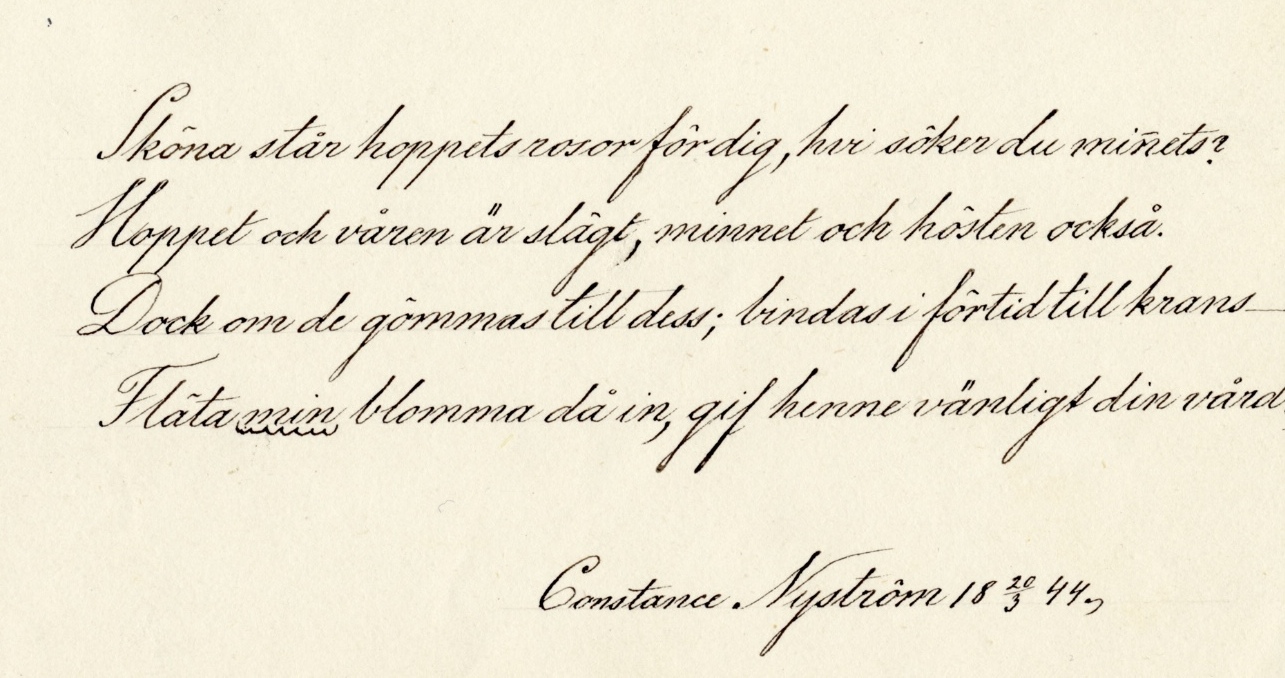 I will not try to translate the poem into English. My interpretation of the poem is that one should have hope when young and that memories are for old age. And that the author would love to be remembered.

Constance Carolina Nyström was born in St. Clara Parish in Stockholm on October 20, 1829. Her parents were Olof Nyström (1795-1830), a yarn merchant, and his wife, Christina Regina Goutelle (1795-1869). After her husband’s death, when Constance was a year old, Christina married pharmacist Carl Åkerström who leased the famous pharmacy, Nordstjernan, from Carl Johan Fredrik Plagemann (who was the grandfather of Cecilia’s friend, Lotten Westman). The family, which included Constance and her siblings, thus lived in the house where the pharmacy was located – on Drottninggatan 84.

Constance was confirmed in St. Clara in 1846, in the same class as Erica Degerman, another friend.

The family later moved to Lund in southern Sweden, and it was there that Constance married Wilhelm Flensburg in 1854. He was a professor of practical theology at that time but would eventually become the bishop in Lund. Constance and Wilhelm had 8 children.

I can imagine that it was a full-time job to raise 8 children and be the hostess in the bishop’s residence.

A note in the Finish author Zacharias Topelius’s autobiography describes the bishop and his wife hosting King Charles XV and his son, Oscar, during the University of Lund’s 200-year-jubilee in May of 1868:

“The same evening, the King arrived from Malmö and was served small pancakes by the bishop’s wife.”

And the newspapers described how the King danced with Constance during the ball the following day.

Unfortunately, not much has been written about her. Her husband’s Wikipedia page only mentions his own accomplishments and those of their 8 children.  She is not even mentioned. All I could find online about Constance was the fact that she served pancakes and danced with the King! I am sure she was a very intelligent and resourceful woman. And she gave birth to and raised 8 successful children! 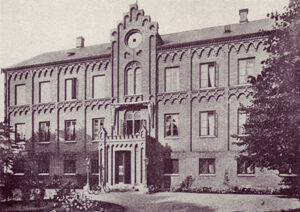 The Bishop’s Residence in Lund