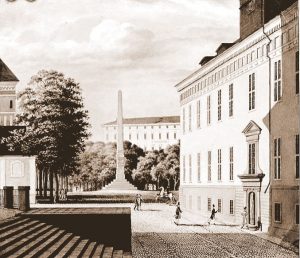 In the foreground, Gustavianum, where Adolf Nordvall studied philosophy. Carolina Rediviva, the university library, in the background. Painting by Johan Way, 1833.

A couple of weeks ago, Kerstin and I visited Uppsala University archives. We were trying to find more information about Augusta’s husband, Adolf Nordvall, and about student life in the early 1850s. Where did he live, where did he post his letters to Augusta, and who were his friends? It was a fruitful visit even though we still have lots of unanswered questions.

While Uppsala was on my mind, I remembered Lotten writing to Augusta about their friend Emelie Breitholtz who figured in a previous blog.

.”….On Monday I was at Bohemans and had quite a nice time. Emelie was there as usual. She is now traveling to Uppsala to her mother’s sister, Mrs. Waij, to open a new hall to which they have moved. Royal Secretary Ekström asserted that Emelie was to perform at some concert there and sing …”

Who was Mrs. Waij? And what did Lotten imply by “a new hall” (in Swedish: “…inviga en ny sal som de har flyttat till.”)?

It took some round-about research to find that the last name, Waij, should actually be Way.

Emelie’s aunt, Maria Theresia (or Marie Therese) Way was born Hästesko-Fortuna and married Johan Wilhelm Carl Way in 1827 (sometimes he also goes by the name John Way). She was a portrait painter, although, I haven’t found any paintings attributed to her. 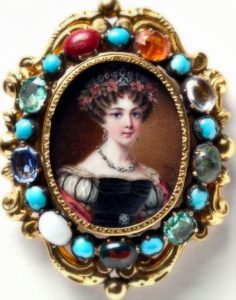 Johan Way, on the other hand, was a famous and multitalented artist and professor, having retired from a military career at age 27. Before then, at age 21, he had participated in the Battle of Leipzig where the French army, under Napoleon Bonaparte, was defeated.

The couple had two daughters, Jenny Maria* born in 1829 and Josefina Theresia born in 1833 (married, Matthiesen). When Emelie visited the family Way in October of 1845, she was 19 years old and her two cousins were 16 and 12 years old.

Wouldn’t it have been interesting if any of these girls had kept a diary – maybe they did?

But back to Johan Way. His specialties were miniature portraits and glass painting. He also wrote textbooks on how to draw and he taught art classes. In the 1830s, he took the initiative to an art museum at Uppsala University. Today, the museum is located in Uppsala Castle.

Johan Way also made some interesting glass paintings for Uppsala Cathedral in 1840-1841. The winged angels were untraditional and had hairstyles of the times.

Angels painted on glass for Uppsala Cathedral by Johan Way. 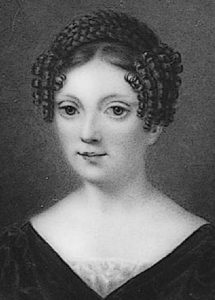 His miniature paintings of royalty and famous people were exquisitely executed and a few are in the Swedish National Gallery. Did he paint any of his wife or daughters, or of his niece, Augusta’s friend Emelie?

And, did Augusta’s husband, Adolf Nordvall, ever run into Professor Way in Uppsala?