New in the 1840s: Sidewalks in Stockholm

New in the 1840s: Sidewalks in Stockholm

Augusta’s friend, Lotten Westman, was an orphan. She and her younger sister Clara lived with a Mademoiselle Hellberg in Stockholm. The house was located at the intersection of two streets: Klara Norra Kyrkogata and Mäster Samuelsgatan.

What did the house look like? Would there be any paintings or drawings of the house? Or a photograph – even if it was taken years later?

Stockholm has a nice archive where you can search on street names or topics. I give it a try, entering the names of the streets. The only thing I find is a watercolor of one of the streets, Klara Norra Kyrkogata. I know where it is painted! If the painter had just turned his gaze to the left, he would have seen Lotten’s house across the intersection. For those familiar with Stockholm, the houses in the paintings were demolished and gave way to the large department store, Åhlens.

The painting is beautiful and it shows two kids sledding down the street. It is probably painted in the late 1800s and not in the 1840s when Lotten lived there. One clue is the fact that the man is walking on a sidewalk – I will get to that, but let’s start with Lotten’s description of the same street in 1845.

“This morning when I woke up, I saw through the window a clear blue sky and was told that it was below freezing outside. You know how happy one gets about dry streets after walking in dirt, 2 feet deep. I hurriedly dressed and, accompanied by my lovely Tante Cordier, walked far, far out, admiring and delighting in the glorious nature. Is there anything more lovely than a clear winter day? It made me so happy and it will keep me going for a whole week in case the weather gets dreadful again.” (Lotten’s letter to Augusta, dated 24 November 1845) 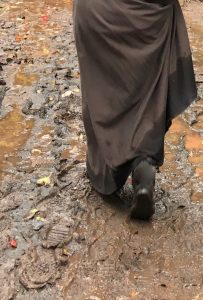 I can imagine the winter – snow, horse manure, and dirt freezing and thawing in cycles. Imagine walking in the street, watching out for horses and sleighs and at the same time trying not to get your long skirt wet or dirty. When it froze, it was certainly a lot easier to walk.

But 2 feet deep dirt! Was it really that bad? Were the streets paved? Were there sidewalks?

I find an interesting book about Stockholm, published in 1897. It has everything about the infrastructure of the city and its history. It has a chapter on Stockholm’s streets, sewage system, and parks.

I have found the answers to my questions.

Yes, it was bad. In 1827, a Professor Cederschiöld suggested that

”The streets should be built as, for example, in Copenhagen with slightly elevated walkways or so-called sidewalks on the sides of the streets so that the pedestrians would not have to wade in the middle of the dirt and be crowded by horses and vehicles, with a not insignificant danger of being injured or even being run over.” 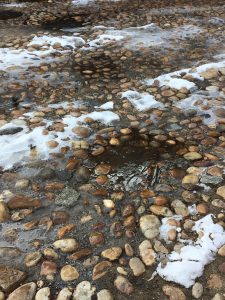 In Stockholm, the law stated that the house owner was responsible for paving the adjacent street with stones. The owner was also responsible for upkeep and repair of the street. There were no standards for the paving and no control of upkeep, resulting in uneven streets and potholes that filled with water. In the middle of the streets, there were sometimes larger stepping stones, so-called Mayor’s Stones (Swedish: Borgmästarstenar). As there were yet no sidewalks, walking on these stones allowed you to stay clear of puddles and dirt.

Street cleaning was supposed to be done on Wednesdays and Saturdays and to be done by the tenants of the house.

In 1845, the year Lotten wrote her letter (above), the city assumed the responsibility for the streets, but the cost was levied by a special property tax. This was the beginning of professionally paved streets using cut stones.

Where Lotten lived, there were no sidewalks, but it was about to change. The first recorded sidewalk was built in 1844 in front of a newly constructed house at Jakobsgatan 5.  It was beautiful and served as an inspiration for building more sidewalks. But the need for sidewalks was also hotly debated. The first entire street to have sidewalks was Regeringsgatan. Slowly, Stockholm was getting sidewalks – at least on the busier streets.

Nowadays, we take for granted that streets have sidewalks and that snow is removed from the streets and that sand and/or salt is applied. Some tax will cover the costs.

“Mayor’s Stones” in the middle of the street on which Augusta lived as a newlywed (Lillgatan, Strängnäs,)

But in my hometown of Lincoln, Nebraska, USA, sidewalks are still private and in older neighborhoods, a sidewalk can suddenly stop because the homeowners didn’t want a sidewalk in front of their house.

I got curious and had to look up the sidewalk policies in Lincoln:

I don’t think I knew that we had to clear snow by 9:00 am, but at least we don’t have to sweep the street on Wednesdays and Saturdays!

One response to “New in the 1840s: Sidewalks in Stockholm”