3. The Beautiful Oscara Wahlström and the Elms of Kungsträdgården

3. The Beautiful Oscara Wahlström and the Elms of Kungsträdgården

Oscara was sitting at her dressing table. She appreciated the large windows in her bedroom. It was so much easier to powder one’s face in a bright, sunny room. She applied the pearl powder to her cheeks and forehead and then dabbed a little pink rouge on her cheeks – just a little. Carolina, her maid, would help her with the hair. Her long, thick, dark hair would be parted in the middle and then loosely braided and gathered in the back. She might curl it a little at the temples to add some extra volume.

While she was waiting for Carolina, she looked out the window. Through the trees in Kungsträdgården, she could see the Opera House and St Jacob’s Church. She was so happy that she and her husband had been able to get an apartment in Davidson’s House. The palatial-looking house, considered to be one of Stockholm’s most beautiful modern buildings, was 5 stories tall. William Davidson, the owner of the famous restaurant Hasselbacken, had invested some of his fortunes in building this grand house. 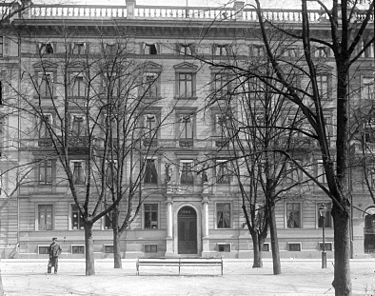 Davidson’s House at Lilla Trädgårdsgatan 2b (The house was demolished in 1902 and today, it is the location of Handelsbanken at Kungsträdgårdsgatan 2).

Kungsträdgården, probably about 1859-1860 (The large house on the right is Davidson’s House which was finished in 1859. As there is no grove of elm trees in the park, the photo must have been taken before they were planted around 1860.) Photo from Stockholm City Museum.

Adding to that, to have Kungsträdgården right in front of your door – well, one couldn’t ask for a better location. On some days, there were even open-air midday concerts right outside your window. And then there was the little grove of elm trees. They had just been planted and provided a shaded nook where one could sit with friends and read a book or work on some embroidery. 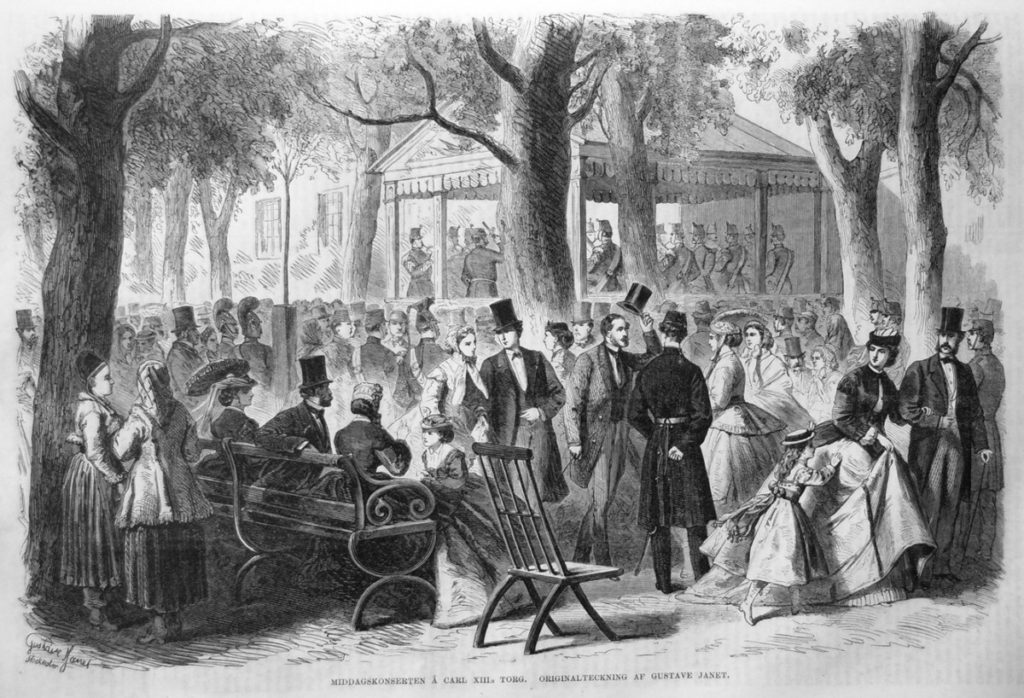 But today, Oscara was getting ready for something even more exciting. Today, she was going to sit for Stockholm’s most prominent portrait painter, Amalia Lindegren. It was exhilarating. At 36, Oscara thought of how much she had already accomplished. She had married extremely well and she loved her husband, she had a beautiful apartment at the most desirable address in Stockholm and, now, she was to have her portrait done! What else could one ask for?

Oscara Fredrica Leopoldina Wahlström was one of the girls in Augusta’s confirmation class. She was ranked as #3 in the class, according to the pastor’s perception of the girls’ importance – based on family name and father’s profession.

Oscara was born 9 December 1828 to Helena Fredrica Dorothea (Fredrique) von der Feer and Pehr Wahlström, a justice of the supreme administrative court (Swedish: regeringsråd). She had a half-sister who was 11 years older, Maria Christina Elisabeth (Mimmi).

In 1845, the Wahlström family lived at Regeringsgatan 14. That was also a fashionable address. Regeringsgatan was the first street in Stockholm to get sidewalks along the entire street.

Those are the few records of Oscara’s life: her birth, communion, wedding, and then finally her death. Her obituary stated that she died at an age of 66 years, 5 months, and 12 days, and was mourned by her husband, relatives, friends, and her lifelong housekeeper. She had no children, and she was buried in Solna.

Two years later, her husband, Joseph, married Anna Sofia Westman. When Joseph died in 1902, his obituary mentioned that he was survived by his wife and a daughter. The last sentence of his obituary read:

“His wife in the first marriage was Oscara Wahlström, known for her beauty in the Stockholm Society.”

The Elms of Kungsträdgården

What happened to that little grove of elm trees that had been planted in 1860? The lovely shaded nook, perfect for a conversation with friends on a sunny afternoon.

Over the next 100 years, they grew very tall and wide. In 1971, when I was 16 years old, they were stately old elm trees that provided shade over a little tea house in the park.

The little tea house in the middle of the elm trees.

But in the spring of 1971, the politicians of Stockholm had voted to cut down the 13 large elm trees. They had decided that it was the ideal place for the entrance to a new subway station. When the citizens of Stockholm realized what was about to happen to the stately trees, the word spread quickly (even in the time of no internet or cellphones). On the night when the tree cutters arrived, the demonstrators were already there and protected the trees. The next day, my friends and I joined the ever-growing number of demonstrators. It was all very peaceful but exhilarating at the same time. The demonstrations were successful and the elms were saved. The entrance to the new subway station was built outside the park and is one of the most beautiful subways stations in Stockholm. 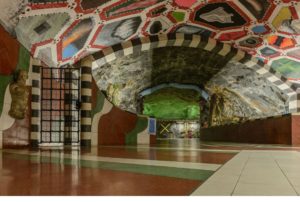 The subway station at Kungsträdgården

The elm trees are still standing. And Oscara’s portrait is well taken care of at the Swedish National Gallery. 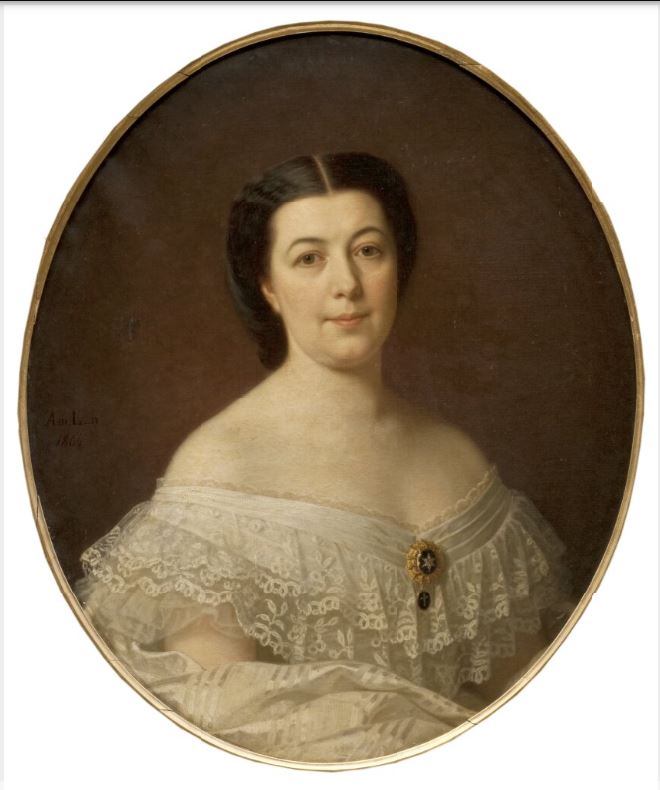 One response to “3. The Beautiful Oscara Wahlström and the Elms of Kungsträdgården”